27 Of The Worst Movie Plot Holes That You Never Noticed

Before we begin, we'd like to point out that we still really like most of these movies even despite the plot holes and we hope you won't hold it against them that they might have some minor flaws. Nobody's perfect after all.

WARNING: SO MANY SPOILER ALERTS

In the final film of the Dark Knight trilogy, Batman saves the city by flying a nuclear bomb out to the middle of the ocean, allowing it to detonate safely but apparently sacrificing himself in the process. However, Alfred then sees him at a café in Italy in the very last scene. How is it that nobody recognises him? He's a billionaire playboy who's been on the cover of Time magazine. Not exactly ideal circumstances if you want to live the quiet life.

Plot Hole: Nobody gives a shit about the friend.

In Taken, Liam Neeson's daughter goes on holiday with a friend to France, before getting abducted and being sold into the sex trade. Neeson then travels to Paris and kills nearly everyone in the city to get her back. But why isn't the friend ever mentioned again? Does she not have any family that care about her?

Plot Hole: There was no need for Jack to die.

You all know what we're talking about. Both Rose and Jack could easily have fit on that bit of flotsam. But of course, that wouldn't have given the tragic romantic ending that made everyone cry. Except for us. Because we're strong... *sniff*

Raiders Of The Lost Ark

Obviously Indy was the one who found the Ark, which was important, but it's probably fair to assume that the Nazis would've eventually found it themselves. But then, if Indy wasn't there at all, the Ark would've been opened in Berlin and it would've melted Hitler's face and not just some random Nazi out in the middle of the desert that no one cares about, thus preventing World War II.

Plot Hole: The Droids are allowed to escape with the plans to the Death Star.

The whole reason the Rebel Alliance stand a chance in the film is because when an escape pod is, well, escaping from the opening battle, it isn't destroyed because the scan for "signs of life" comes back as negative. But in a universe populated by droids, why does this make any sense? Why not just blow it up, just to be safe? Because we wouldn't have six films and another three on the way if they did, that's why.

Plot Hole: All of the Iron Man suits fit everyone.

Tony Stark may be a genius with cash to burn, but even he can't design a suit that can fit so many different people throughout the course of the three films. Col. James Rhodes, Pepper Potts, and even the President of the United States, all fit comfortably into suits tailor-made for Stark. But even if you ignore this fact, how do the suits work with them in it? Don't they work off the arc-reactor in Tony's chest?

In the Mexican stand-off near the end of the film, Eddie has his gun aimed at Mr. White, who has his gun pointed at Joe, who in turn has his gun pointed at Mr. Orange. What is supposed to have happened is that Joe shoots Orange, which causes White to shoot Joe, and then Eddie to shoot White. And then while Mr. White is falling, he is supposed to swing his gun around and shoot Eddie. But apparently the squib (movie prop) went off early, and Chris Penn, who played Eddie, just reacted to it, causing one big gaping plot hole.

In another Tarantino film, this error is purely historically based, as the story is set in 1858, with dynamite not having been invented until 1865 by Alfred Nobel, and didn't arrive in America until 1867.

Plot Hole: The letters L and Y don't fall away as they should.

This one really only makes sense if you've seen the film. Basically, when Indy is going to get the Holy Grail, he has to get past a puzzle where there are letters on the floor, and he can only step on the ones that spell out God. He thinks that this is "Jehovah", but the Latin spelling begins with an I, so when he steps on J, it collapses and he falls through the hole. To stop himself falling to his death, he grabs onto the edge of the hole, but the thing is that the letters he grabs onto are L and Y, which also should have collapsed. 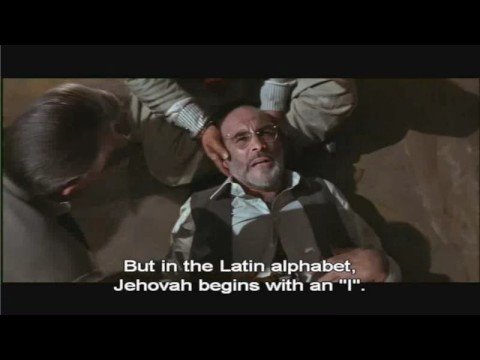 Plot Hole: Daniel wins with an illegal kick to the face.

The whole way through the climatic tournament, the referee repeatedly outlines that there will be no kicks to the head allowed. This is all before Daniel wins the final fight. With a kick. To the head.

Plot Hole: Hugo Stiglitz should have been recognised.

Hugo Stiglitz was infamous throughout the German army for killing 13 Gestapo officers and defecting to America. But then, when the Basterds are on a secret mission that brings them to a bar full of Nazi officers, not one of them recognises the seemingly notorious man.

Plot Hole: When Flint Marko turns into Sandman, everything turns to sand, apart from his locket.

Flint Marko is the victim of an unfortunate accident when he falls into some weird military sand-testing experiment that turns him and everything else he has to sand. Apart from a locket containing pictures of his family. This was more than likely done to increase the sentimentality of the scene but that doesn't make the plot hole any smaller.

Plot Hole: How did they get the escort flyers into the vault?

The grand reveal of the film is that Danny Ocean and his crew switch all of the money in the casino vault with thousands of flyers for escort services in Vegas. The only issue is there is no evidence of how or when they could have gotten the flyers into the vault. Even the director, Steven Sodebergh, admits that it makes no sense. At least that's something.

Plot Hole: The All Spark only creates evil Transformers.

When the All Spark is being carried through the street, it starts turning all of the machines in the vicinity into robots that all seem to have a taste for human blood for some reason. There is no reason why they are created evil and not good.

His three friends spend a number of days looking for him, when it turns out he was on the roof of the hotel the whole time. Now he does throw a mattress down to try and get some attention, but why did he stop there, and not continue to shout down to people on the street, or bang on the fire escape door constantly, until someone heard him?

Plot Hole: How is the computer virus compatible with the alien technology?

When the humans create a computer virus to take down the alien invaders, how did they know that it would, considering that not even viruses that work on PCs can work on Macs? Also, how did they have the right cable to connect the computer in the first place? Is the USB slot really that universal?

Plot Hole: Harry and pals didn't use the Time Turner to save anyone's life.

In the third film, Hermione and Harry use the Time Turner to go back and change the events of the evening, saving Buckbeak the Hippogriff in the process. So why couldn't that have been used to save Harry's parents or anyone else that dies?

Plot Hole: E.T. doesn't fly back to his spaceship.

E.T. is stranded on Earth but then when he's sitting in the basket on the front of Elliot's bike, he causes him and the rest of his friends to fly on their bikes. Why didn't he just use this ability to fly back to his spaceship way earlier in the film?

Plot Hole: Scar has an opportunity to kill Simba himself.

After Mufasa's death, Scar tells Simba to run away and "never return" before sending his hyenas after Simba to kill him. But Simba was right beside Scar when he did this, so why didn't Scar just kill him himself? Probably because it would've emotionally "scarred" (get it?) us and every other 5 year old that watched the film but let's not get into that.

Plot Hole: Buzz acts like a toy even though he thinks he's a space ranger.

When Buzz Lightyear arrives in Andy's room, he's convinced that he's a space ranger and completely rejects Woody's insistence that he's a toy like the rest of them. So why then, when Andy or any other human walks into the room, does he freeze like all of the rest of the toys?

Plot Hole: The runway at the end is ridiculously long.

The climax of the film takes place on a runway as the main characters try to stop a plane from taking off. The problem is that it takes so long to do that the runway seems to stretch on forever. Empire have a brilliant infograph on the whole scene.

Plot Hole: When Andy escapes through the tunnel that he has dug hidden behind the poster of Rita Hayworth in his cell, who stuck the poster back down after he crawled through? 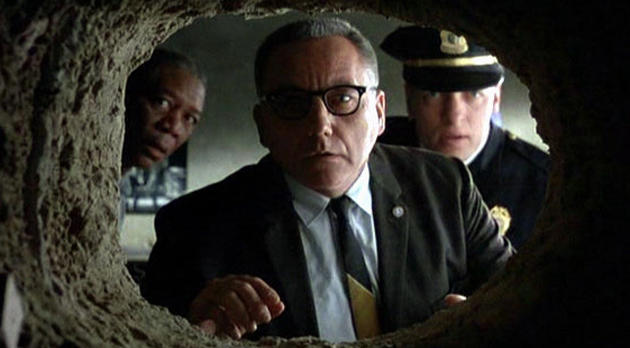 Lord Of The Rings

Plot Hole: The eagles aren't used from the very start.

When the eagles are used to rescue Frodo and Sam from the side of Mount Doom, it brings on the serious question of why they weren't used to just bring them there in the first place. The distraction caused by Aragorn at the gates would have still been necessary but Frodo and Sam risking life and limb over the course of three films definitely wasn't.

Plot Hole: It's always after midnight.

The one thing everyone knows about the Gremlins is that you shouldn't feed them after midnight. But if you think about it, it's always after midnight. At what point in the day does it become before midnight?

This big scary dinosaur attacks everyone in the visitor centre but manages to not make a sound entering the building and is only noticed by everyone until it is nearly too late.

If the parents don't believe in Santa, then where do they think the presents come from? Santa is real kids, and don't let anyone tell you otherwise.

Entertainment
By Rory McNab
Quiz: Can You Complete This Insane Movie Numbers Quiz?
1

Entertainment
By Rory McNab
The Three Films On TV That You Need To Watch Today!
1