For a long time we, as a civilisation, have been scrounging around, trying to find the most viable energy source to enable us to phase out fossil fuels, to little avail. With the pace of climate change growing ever more rapid and with the world's weather becoming increasingly erratic, this search has necessarily been gathering intensity, though it still lacks any singular point of focus.

Some have touted solar and wind farms as our best bet, while some pie-eyed dreamers have long sought to attain sustainable nuclear fusion to create a limitless, and safe, source of energy. However, the search can now be called off. These methods will now simply prove redundant, as we surely now have a guaranteed source of limitless, free energy. Cheap, sustainable, and ecologically friendly power for all is at our finger-tips, thanks to the creation of this ludicrous travesty, this pint of Guinness with a picture of the Queen etched onto the top of it.

For the mere existence of this bizarre creation, a rudimentary effigy of Queen Elizabeth II laser-etched into the head of a pint of Guinness, surely marks a defilement of a beloved Irish symbol sufficient enough to cause Michael Collins to spin in his grave, with such velocity, that you could simply bang a couple of magnets onto his whirling cadaver and harness the never-ending energy that would be created.

This, this pint of Guinness with a picture of the Queen's face laser-etched into the foam, is perhaps one of the most confusing confluences of two nation's symbols in living memory. It is like finding out pseudo-Irishman, and extravagant patriot, Michael Flatley secretly has a Union Jack tattoo; it is discovering that Danny Healy-Rae each night fashions himself a nest out of empty crisp packets, but secretly prefers to use Walkers and King rather than Tayto; it is - from the other side - like finding out that Danny Dyer owns, and frequently listens to, the entire discography of Crystal Swing. It is something that seems like an impossibility, something that seems to pick apart the very fabric of our known universe. And yet, there it is, a Guinness with a picture of the Queen's face in it. 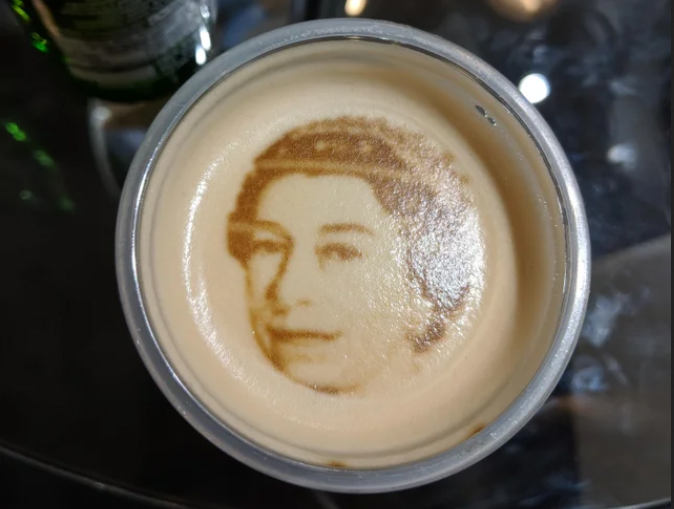 It is bemusing seeing something so familiar suddenly appear so alien. It is akin to returning home one night to find your partner in a tryst with a once-sworn enemy - in this case, the Queen of England. "How could you do this to me Maureen!? How could you do this to the kids!?" You might yell. "And with the Queen of England of all people - good evening Your Majesty," you'd continue, awkwardly sort of half-bowing, unsure of how to address the monarch.

Up is down, left is right, night is day. Nothing is as it was and nor can it ever be again.

This bizarre concoction was posted on Reddit by a user called TheYorkshireMailman. No reference was given as to where this Guinness was served, either in Ireland or in the UK.

A Shop In Dublin Is Now Selling Kinder Bueno Ice-Cream, The Dream Has Arrived

19 Of The Best Jokes That Were Cut From 'Father Ted'

Entertainment
By Rory McNab
Danny Healy-Rae Says People Who Give Up Meat Have Never Done A Hard Day's Work
Trending Now
Entertainment
By Kate Breslin
14 Things You Probably Didn't Know About The Wolf Of Wall Street
Entertainment
By Tony Kelly
Opinion: You're Wrong, THIS Is Actually The Best Christmas Song Ever
Travel
By Dafe Orugbo
Bucket List: 20 Things You Need To Do Before You Turn 20
41