Brandon Emery who's a little over a year old left his mother in a state of pure panic after he locked himself in his mother's car. At least the toddler rescued by firemen seemed to be having a whale of a time.

Brandon's mother had placed her car keys in the boot while unloading her shopping and cheeky Brandon pressed down on the central locks inside the car, leaving her unable to get him out. Talking to The Daily Mail, Kirsty explained, 'I was a bit panicky at first, wondering how I was going to get him out, but luckily a few other shoppers quickly came to help me out.' 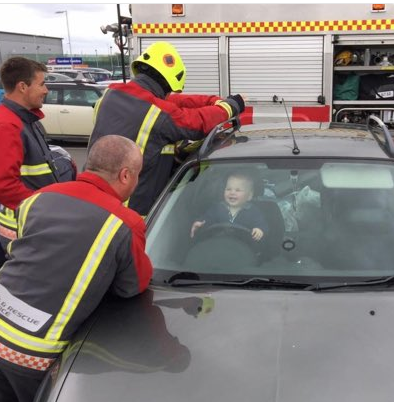 The 'amazing' crew from Bude Community Fire Station in Cornwall, were quick to the scene and used small hand tools on the car to rescue the toddler. The gas thing is that throughout the entire process Brandon was wetting himself laughing and was as happy as could be.

In the end, Brandon was rescued safe and sound and the lads at the Fire Station were equally as delighted. They even made the image their Twitter profile picture.

Also Read: €160 A Month For 10 Years? This Loan Scheme Could Be A Reality For Irish College Graduates

News
By Deirdre Kelly
10 Most Popular 2018 Car Makers In Ireland Revealed
Trending Now
Life
By CollegeTimes Staff
21 Irish Names That Are Never Spelt Or Pronounced Correctly
Travel
By Dafe Orugbo
Bucket List: 20 Things You Need To Do Before You Turn 20
Entertainment
By David Sweeney
30 Of The Hardest "Would You Rather" Questions Ever
Life
By David Sweeney
22 Embarrassing Moments We've All Experienced
About Us ● Advertise ● Privacy ● Contact Us Powered by Publisher Plus
Next Page »