A Comprehensive Look At How Alex, Sweet Alex, Has Become A Monster

As another night drew its sleepy arms round the inhabitants of the Love Island compound, it was evident that the brief period of harmony they'd all enjoyed had come to a juddering halt. The delicate equilibrium that had briefly flourished within this ecosystem of sentient Instagram posts was shattered; shattered primarily by the fact that Alex, the once beloved darling of the house, has devolved into a raving paranoid lunatic.

Last night's episode largely centred around Alex's rapid descent into the throes of this raving hysteria. Over the hour we saw him him convince himself of his own theory, that Ellie had lured him into choosing her during the recoupling to ensure her own safety in the show. Alex spent the show prowling the compound, like some kind of deranged polar bear in a concrete pen in a Chinese zoo, depositing himself on any available beanbag and venting his suspicions into the increasingly unsympathetic ear of whoever was nearby.

Alex, poor Alex. Once the delicate cherub of the show - the trampled and forelorn contestant who seemed destined to remain a sort of tragic spinster who spent his days awkwardly shuffling around, orbiting the existing couples with a pained look of yearning on his face - has become a monster. After pining for so long to enter into a couple, he immediately became so wracked with angst at the burden of the situation that he emotionally capsized, making Ellie realise within hours that she had absolutely no feelings for him.

The episode culminated with her taking him to one of the many elaborate pieces of garden furniture dotted throughout the villa, to explain her feelings on the situation. She, calmly and rationally, elucidated why she thought they were incompatible as a couple. He, Alex - once dear and sweet - glared across at her, his face illuminated in preposterous blue light, looking the image of a low-rent villain in some budget Scandi-drama and became increasingly irate. 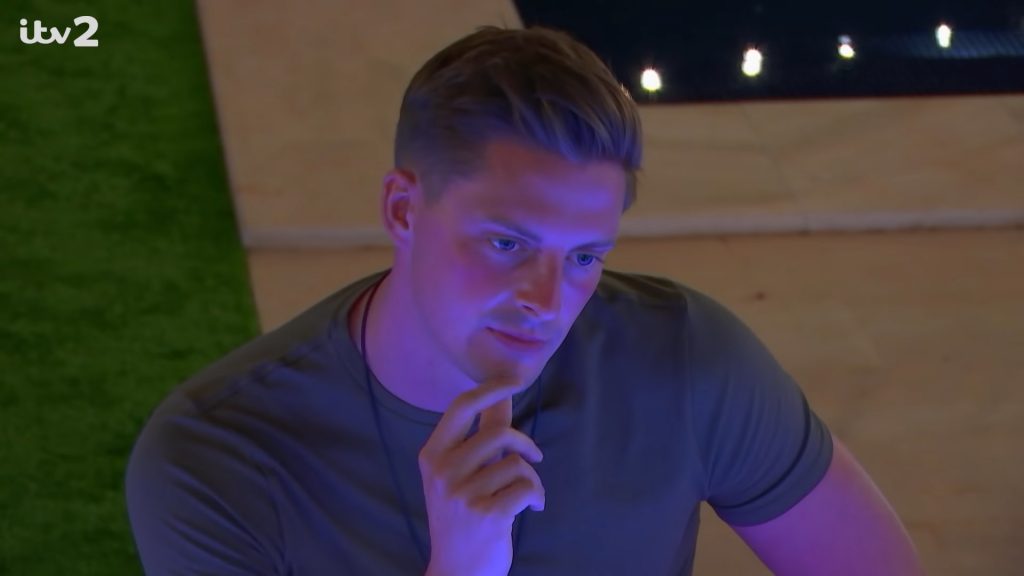 He has snapped. The doctor has snapped. The other housemates sense this, they were tiptoeing around him, fearful of what has been unleashed. The Alex we knew and loved is gone. The charmingly sun-crisped bastion of bumbling affability has been replaced by new Alex, Alex 2.0.

Alex 2.0 has an unsettling, menacing air. Alex 2.0 will sit beside you on the bus, uncomfortably close to you, even when there are other seats that are entirely free. Alex 2.0 is the kind of man you'd see in supermarkets sifting through croissants with his bare hands, prodding and prying through the stacked pastries, before turning away without actually taking any of them. At some point the entire Love Island house are going to be awoken in their weird halogen-lit sex-dormitory to find Alex 2.0 smelling some of Ellie's clothes and openly weeping. This is guaranteed. It will happen and it will happen soon.

And yet, we, them - the other islanders - are all responsible for his creation. For the entirety of the first few weeks he was molly-coddled and told that he was both lovely and fantastic and that someone would inevitably come into the house who fancied him. We, as a society have our feet on the pump - have been caught puffy-cheeked, lips pursed on the nozzle - of his weirdly maladapted and inflated ego. He is a monster yet he is our monster.

Aside from the saga with Alex, strife was in no short supply elsewhere in the villa. Something truly is rotten in the newly sovereign state of Love Island - a new and terrifying nation whose main imports are tanning lotions and industrial strength cleaning products for their bedding and their main exports being spurned evictees and venereal disease. Eyal and Megan appear to have come up against the fundamental impasse that they actually quite dislike one another's personalities. There's only so long a relationship between two incredibly different people can be sustained on pure physical attraction, thankfully Eyal and Megan have shown that 'so long' is actually 15 days.

The cracks in their relationship first appeared when Eyal pressed Megan to say that they should have more fun together. Naturally, we all know that the way to truly have fun with someone is to berate them for not being fun. Eyal hyped up his own, hitherto unproven, capacity for 'fun' in much the same way that one imagines a thrice-divorced geography teacher would while desperately trying to sell himself on a first-date.

Their burgeoning rift was exacerbated by a game of Mr. & Mrs. - a game ostensibly about showing how much a couple know about one another, but which is so certain to do the opposite that it can only have been devised by divorce lawyers in need of business. When asked about the number of sexual partners he believed Megan has had previously, he answered 37, double her stated number of 20. Megan did not like this and consequently, we are witnessing the death of Eyal and Megan.

The stand out moment from this game however was the revelation that 22 year old Adam, a personified sleeve-tattoo, has apparently slept with some 200 girls. Sweet Christ. Aside from apparently being the pioneer and sole participant of some bizarre one-man breeding programme, he is essentially a living petri-dish for a plethora of STIs previously unknown to medical science.

Following hot on the heels of the abundance of shenanigans in last night's episode, tonight's seems to be equally promising.

Also Read: Danny Dyer Posts To Instagram Calling Out Jack For His Behaviour