When future generations finally manage to extract themselves from the post-apocalyptic sludge that will soon pass for 'the earth' and attempt to piece together when exactly was the turning point; what was the exact moment when humanity tipped over the edge and became wholly and completely doomed, they will now have their answer. There will be many incidents these future historians may be able to speculatively point to, a resurgence of fractious political polarisation; the inexorable damage wrought by climate change; or, the return of Jeremy Clarkson as an acceptable mainstream personality on terrestrial television, yet, with all of these, they will be proved wrong. The crisis point; the triggering of the end times, was in fact a Tweet sent by Access Online commending Kendall Jenner for consuming food - which they have since deleted.

Access Online, in a Tweet about Kendall Jenner's appearance at the Met Gala - an event which attracts frenzied attention from celebrity-focused online media outlets like chum in the water - described her as 'brave' for eating some food. Kendall Jenner, succumbed to the basic biological compulsion within her to ingest nutrients and calories and for this, she must be praised. 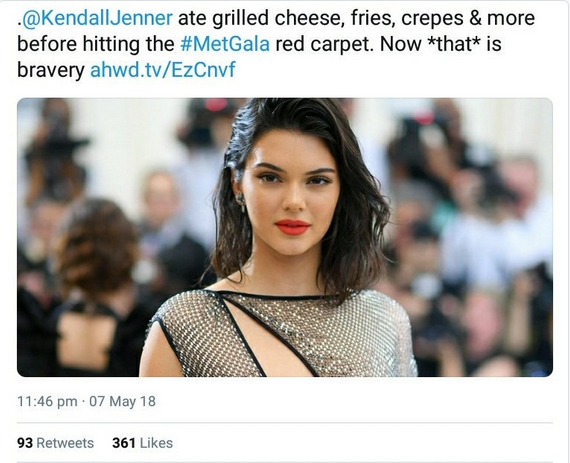 Firstly, this begs the question of what possible source they have for keeping such close tabs on Kendall Jenner's diet. Have they bribed a particularly unscrupulous dentist to place a tracking sensor in one of her molars to detect what foodstuffs she consumes? Frankly, I don't know, at this point, all we can do is speculate.

Secondly, it is of course no business of ours how much, or what, Kendall Jenner eats. Short of necessitating some kind of legal intervention due to her breaking international laws by consuming the meat of a critically endangered animal or perhaps human flesh, what she eats is entirely her prerogative and, aside from being a powerfully boring subject to centre a lightweight article around, it is evidence of an incredibly complex and deeply disconcerting relationship with food that is promoted in the interests of 'body consciousness'.

In lieu of proselytising about the massive problems inherent in pitching the idea of 'a female consuming vaguely unhealthy foods' as 'brave', I will wind this whole thing down with some pithy Tweets skewing Access Online's approach. In the inimitable words of Alan Partridge Kendall Jenner is 'so ruddy, bloody brave'.

first she came out as straight and now THIS? braver than the US Marines https://t.co/mnZrrJWiUb

God bless this skinny white woman for having the courage to have dinner. https://t.co/AiVG3Rj5gg

that must have been so hard for her. thank you for sharing her story <3 https://t.co/7OGRN1nNw5

A woman eating carbs before being seen in public? Such heroism has not been observed in modern times! Show us to the lady future, great leader! https://t.co/sTK2UoBjWV

I urge other women who are brave enough to eat food before wearing clothes to come forward ✊ https://t.co/x7zT1Allk8

Also Read: Wheatus Have Made An Irish Cover Of 'Teenage Dirtbag' And It's Pure Joy