A Look At How 'Bear Grylls: The Island' Shows That Humanity Is Utterly, Utterly Doomed

Much of contemporary popular culture revolves around one thing; imagining how the world will look after whichever of the many large, apocalyptic turds humanity is currently brewing - climate change, possible thermonuclear annihilation etc. - are eventually heaved into the whirling blades of an equally large, apocalyptic fan. Countless films, TV shows and books have been churned out over the years, all variously hypothesising just how humans would react to such an event and what kind of society would be constructed by the survivors that were able to heave themselves out of the rubble.

For those of you unfamiliar with Bear Grylls' reality TV masterpiece, Bear Grylls: The Island, allow me to explain. Bear Grylls maroons a group of quite ill-equipped people - both materially and emotionally - on a tropical Pacific island for 40 days, with some cameras, to allow us, the viewer, to mock their attempts to survive. The contestants have never met each other before being abandoned on the island but must work together to do everything, from sourcing food and water, to building shelter, making fires and trying to avoid being eaten by some of the island's larger wildlife. Essentially Bear Grylls has taken the nightmare, worst-case scenario for a 16th-century seafarer and turned it into a commercially viable television format. At this rate, it is only a matter of time before we see Bear Grylls: Ocean Cholera Scene, where a group of people are forced to try survive at sea on a British tea-clipper in the midst of a cholera outbreak, soundtracked exclusively with music from Britpop's Ocean Colour Scene - if only to have the name make sense.

The fifth series of the show began this week and, in one episode, it has already proved a more than worthy vessel for displaying the true extent of the abject degradation humans are capable of. Since the show's first season, each subsequent season has had some slight spin on the whole premise of sequestering a group of people on an island. They've introduced two groups on different islands as well as putting two groups on the same island, without either of the groups knowing of the other's presence at the outset. They've previously demarcated these groups in different seasons by age and gender and, when the groups would inevitably come into contact, they would eventually achieve something approaching harmony in the primitive society that they evolved.

This season, they have similarly placed two separate groups on one island. What differentiates these two groups however is their financial clout and, implicitly, their class. One is a group of people who earn an average annual income of some £100,000 the other on average earn less than the national average salary. This is Bear Grylls' polite workaround of saying 'what happens if we get a load of posh people and a load of working class people - who have lots of pre-conceived ideas about one another - remove them from the jurisdiction of any recongisible law enforcement and see how long it takes for a class-motivated murder to happen'.

The working-class group, led by Phil, a glazier and parody of a Cockney, were immediately incensed by the muted reception they got from the posh group when the two groups first came into contact on a beach. In fact, the only thing that infuriated them more than being ignored by the posh people was when the posh people stopped ignoring them and they realised how largely awful the posh people were.

Far from putting aside their class differences, and realising that on a remote Pacific island where both groups have equal resources and are thus on an equal footing, each group immediately split off after meeting and became adament that it would be the first to light a fire, like some sort of petty Neaderthal Olympics. When two of the working class group, ingeniously decided to use the wool from a(n unused) tampon as kindling, they won the race to achieve ignition and the posh people, far from celebrating the collective victory of the overall group as a whole, seemed legitimately crestfallen as they gazed forlornly at a woman, employed as a receptionist at a scrapyard, waddling across the beach triumphantly holding aloft a smouldering bit of tampon, like some bikini-clad Prometheus. 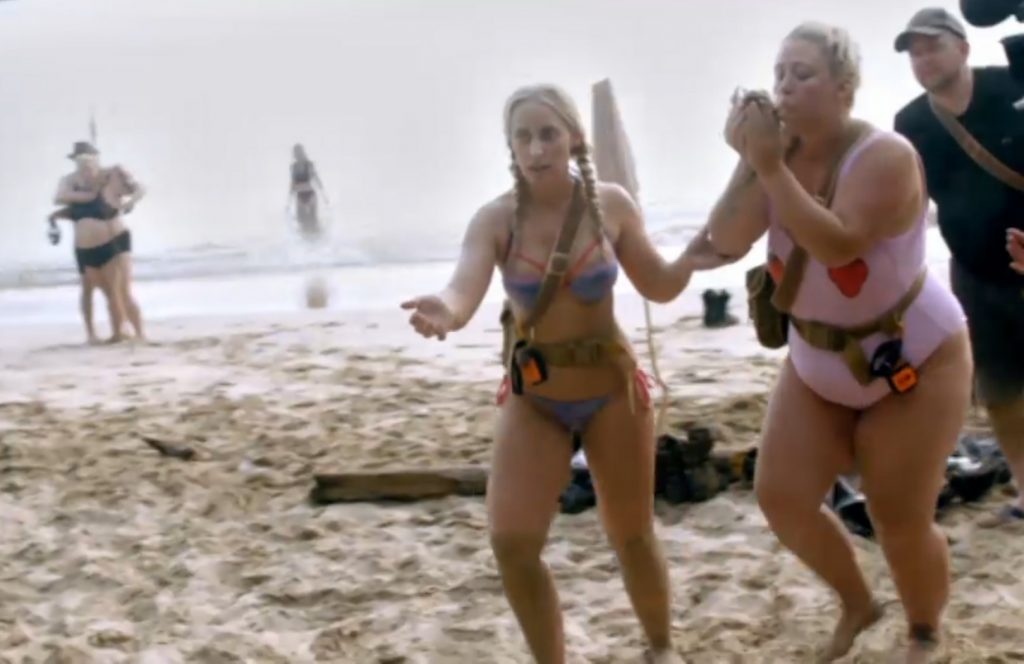 Relations between the groups deteriorated further over a dispute about shelter. The two groups had worked together, under the supervision of ex-military doctor Shereen, the apparent matriarch of the posh group, to construct some sort of rudimentary teepee out of palm leaves. However, the shelter ended up only being large enough to house the working class group, who'd claimed their spaces in the shelter first, resulting in the posh group being forced to sleep out on the beach. After this obviously irreconcilable fiasco the two groups, rather than deciding to try persevere through their early issues, immediately decided to split up again as co-existence was simply unpalatable.

It's good to know that even in times of great need, when our very survival is threatened, we can still prioritise the pettiest of issues to fundamentally ensure that we, as a species, cannot co-operate.

When the apocalypse does come, the society that emerges will, briefly, try to live harmoniously before everyone produces their most recent, pre-collapse-of-civilisation bank statements, so that they may splinter off into unsustainably small sub-groups determined by their socio-economic standing. From there it is only fair to assume that some grand final class war between these factions will end up eradicating the last dregs of humanity from this earth.  Thrilling stuff.

Entertainment
By Grainne Sharkey
Netflix Confirms Another Interactive Episode With Bear Grylls: 'You Vs The Wild'

Entertainment
By Grainne Sharkey
Netflix Confirms Another Interactive Episode With Bear Grylls: 'You Vs The Wild'
Trending Now
Uncategorized
By Kenneth Fox
Signs That You're A Complete Asshole
Life 101
By CollegeTimes Staff
14 Signs That Your Girl Best Friend Likes You
Life
By CollegeTimes Staff
21 Irish Names That Are Never Spelt Or Pronounced Correctly
Life
By David Sweeney
22 Embarrassing Moments We've All Experienced
About Us ● Advertise ● Privacy ● Contact Us Powered by Publisher Plus
Next Page »