As we begin our descent into this collective nightmare, I have but one small request; one small favour to ask of you. I would like you, you reading this now, to turn to the person nearest you and ask them something. Perhaps there is no one beside you, perhaps you are home alone - fear not, simply drag on some of the least musty clothes from the pile of crumpled fabric adjacent to your bed and call over to your neighbour's house to ask them. Knock on their door and when they answer, say to them, "Jeff [the name of your neighbour may vary], I have not called to complain that you don't weigh your bin lids down, meaning that a lot of your rubbish blows into my garden on windy nights - though I would be well within my rights to. No, instead, I am here to ask you, what is the perfect human body? Describe it to me Jeff, describe to me the perfect body."

At this point the person you've asked this of, will, after a brief pause, in all likelihood proffer the name of a celebrity crush - in Jeff's case he suggested former Ready Steady Cook host Ainsley Harriott. Whoever they say, they are wrong. Whatever person they suggest as being the epitome of human perfection, they are perilously and utterly wrong. I want you to step close to them, step right into their personal space so that they can smell the remnants of your breakfast on your breath (in my case, half a kilogramme of Billy Roll and an entire pipe of Berocca) and tell them this. Get right up in their face and in a low gravelly voice tell them "Jeff, how could Ainsley Harriott have the perfect body, he doesn't even have a marsupial pouch in which to store his young. Does he have the long supple legs of an emu? Does he Jeff? Does Ainsley Harriott have the legs of an emu? No he doesn't Jeff, no he doesn't!"

They will inevitably look at you with a look of revulsion on their face, partly due to the insanity of what you've just said and partly due to the overpowering stench of your rancid morning breath. Their revulsion is due to fear, a fear of the unknown, and it ought be pitied. This is because they evidently did not see a recent BBC Four show, called Can Science Make Me Perfect?, which attempted to ascertain what the perfect human body would look like from an evolutionary perspective. Rather than simply taking a punt at what the perfect human may look like - for my money, bring in an extra arm; a cup-holder affixed to the pelvis, and a sort of fleshy protrusion located on your back that transmits a hi-speed Wi-Fi connection and we're there - they secured the services of an anatomist, Alice Roberts, to construct what the perfect human would look like.

Given that this was essentially a task of swapping human body parts for better parts from other animals, the result was inevitably going to be a walking, breathing nightmare. In fact, the word nightmare is too soft, too gentle, for the sheer trauma incurred when you first lay eyes on the monstrosity that they constructed. Behold. 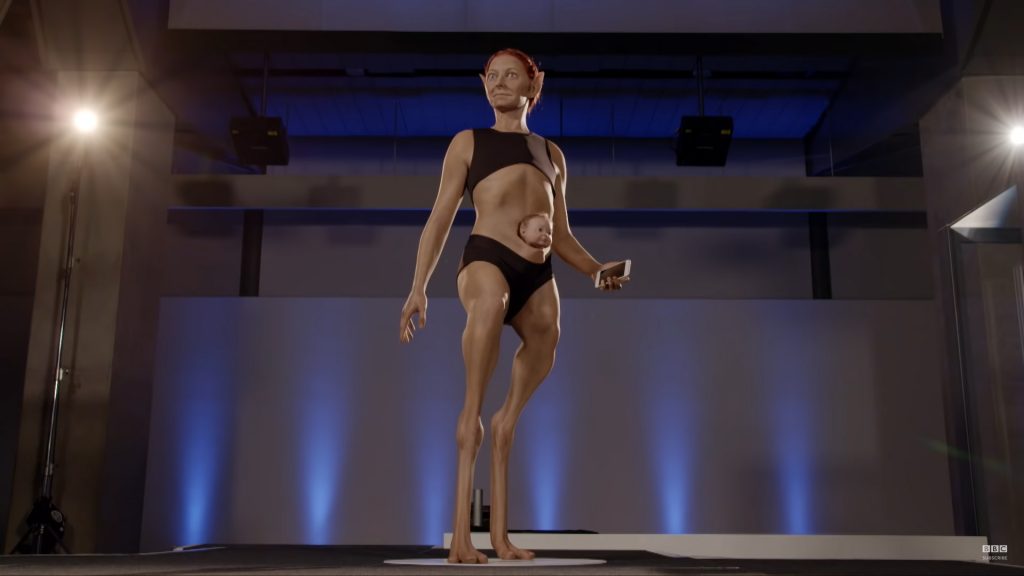 Allow your eyes to glide over this travesty. Allow the many inevitable questions that arise from its lithe, weird physique to flood through your mind. Why has the humble belly button been replaced by the head of a baby? Why are the ears now pointy? Why is the head of Chuckie emerging from the belly? Why is this person clutching a smartphone? Are they on WebMD posting 'Baby head for belly button, should I see a doctor?' into one of its forums? The head of a baby for a belly button, why? Why?

Well, according to Alice Roberts, who this 'perfect human'/ agglomeration of all the evils in the world was designed to resemble, it employs several features from various animals that she believes would anatomically improve humans. The addition of a marsupial-esque baby pouch to the stomach of any person, would apparently ease the difficulty of child-birth by allowing births to occur earlier in a foetus' development. However, she fails to recognise a critically important point. People would keep things in their belly pouches. They would keep phones, loose change, receipts etc. in that thing. The belly pouch would be treated as an extra pocket. Now imagine the horrifying amount of odd debris that somehow collects in the pocket of a pair of jeans you've been wearing for a week; dirt; small change; several yards of thin mysterious fabric; bottle caps; crumbs from crisps you have no recollection of eating - that, all of that, would end up in your belly pouch. Imagine paying for something in a shop by reaching into your belly button pouch to pull out a fistful of weird, musty change. Imagine the look of sheer horror on the shop-assistants face as you have to tip this collection of clammy belly change into their quivering, disgusted palm.

You would have to use the strong setting on your shower nozzle to gush all of this detritus from your belly button pouch. And yet, it would never feel clean.

There are many additional features that this reimagined human possesses that are equally traumatising, the most immediately shocking of all the others being the emu legs. Oh the emu legs. While these might make running long-distances easier, it would call for a complete re-imagining of the very concept of shoes, which I am simply not ready to do.

Should you wish to further enlighten yourself as to what other improvements could be made to the human body, watch the video below. However, if you place in any value in protecting your sanity, it is probably best to steer clear. Instead, close whatever device you've been reading this article on and lie down in a dark, quiet room for around 15 minutes or so to digest what has just transpired.

Entertainment
By Donny
Quiz: How Well Do You Remember 'Gavin And Stacey'?
1

Entertainment
By Donny
Quiz: Can You Complete The Lyrics To Maniac 2000?
1

Entertainment
By CollegeTimes Staff
The Oscars Nominations Are Out!
Previous Next

Entertainment
By Donny
Quiz: How Well Do You Remember 'Gavin And Stacey'?
About Us ● Advertise ● Privacy ● Contact Us Powered by Publisher Plus
Next Page »