Is This The Ultimate Culchie Marriage Proposal?

Culchie weddings are a thing of myth and legend - one can only ever dream of seeing one. Luckily the next best thing arrived in our inboxes today...  could this be the ultimate culchie proposal?

When Co. Tyrone farmer Ashley Farrell thought of how he'd like to pop the question to his missus he didn't have to think long and hard - the answer was right in front of him: his cow.

So on Christmas Eve Ashley took his gf Anna out to his cow shed in Fivemiletown to see her present. By this stage she was probably fearing the worst but wow, was she wrong.

She told Mashable, "As we were walking across the yard I saw a cow… and the cow turned around so I could see the writing"

The cow had ‘MARRY ME?’ spray painted across its side. Amazing. Then when Anna turned around, Ashley was on one knee, ring in hand. 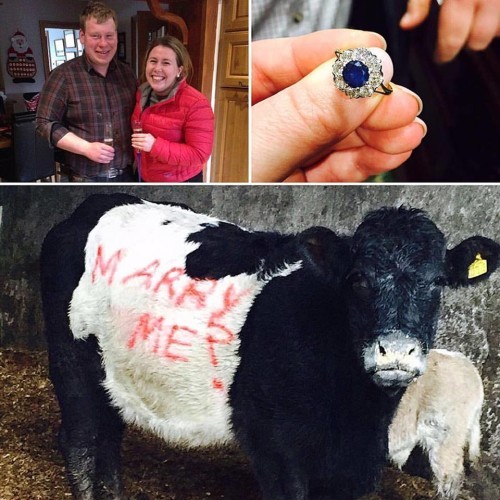 Anna said yes instantly to her very romantic partner: "Ashley is a typical farmer and he would tell you himself he’s not a romantic, so it was a very pleasant surprise that he had been so creative!", she said.

Maybe their baby will be born in a manger? #realityshowideas

Also read: This Guy Wants To Trade His Rotten Car For U2 Tickets on DoneDeal