We've all heard it before. "Leaving Cert weather is on its way." But is it really? The kind folks at Met Éireann have been in touch with us for a collaboration of meteorological proportions. It's finally time to separate the fact from the fiction.

As June 2017 rolled around, I was planning barbecues and a few bottles - safe in the knowledge that, given the week that was in it, the misery of the nation's 18 year old's would unjustly summon the summer sun once more.

But given the strangley wet weather we're having during exams this year, the natural place to commence our dissection of this most unusual of climactic phenomena is three years ago. Here was the Met Éireann weather report for June 4th 2014: the day the class of '14 sat down to face English Paper I.

The weather was essentially gack. From Wednesday the 4th, it actually continued to piddle rain across the country - with occasional thunder storms and sporadic flooding - until the agriculture and technology exams a full seven days later. Even the weekend was shite.

Yet I have no memory of such horrendous conditions from said week, and it can't all be down to the fact that I spent my summer working in the sub-Saharan climate of Cork. In my selective mind, and in the minds of many, sunshine during the Leaving Cert is pre-ordained; an unwritten law of nature, and one you could set your watch to. A bit like Enda Kenny's hair.

I was curious as to find out whether an ghrian was actually ag scoilteadh na gcloch when I sat my own Leaving four years ago, or if my memory has been tainted by the national narrative. Maybe the sun was all an illusion when I felt the whole world was conspiring against me? The Met Éireann report for the 8th of June, 2011:

I could have sworn I was borderline blinded by the sun that day. But there is also the stark possibility that I was rendered insane at the time, with the country as a whole taking a bit of a drenching as I forgot who wrote The Kite Runner and tried to invent Shakespeare quotes.

According to Met Éireann records, the following day - the Thursday, or as I know it, the day I decided to drop down to Ordinary Level Irish - even saw some ground frost in south Leinster. By the way, I didn't study geography, but I'm fairly sure frost is always on the ground.

From there, pretty much a fortnight of fog, clouds and showers, with some sunny spells. Hardly 'Leaving Cert Weather' as we know it.

So, is the whole phenomenon just a load of crap?

Well, yes, obviously. If you read this thinking we were going to prove an actual meteorological pattern - in Ireland, of all places - you're an idiot. However, I think we've discovered when the idea of 'Leaving Cert Weather' started. 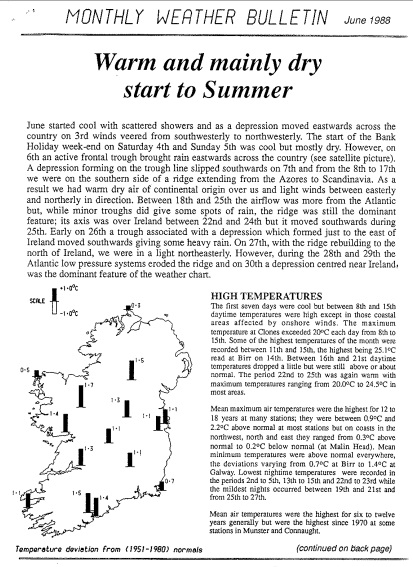 'It was in the year of '88 in the lovely month of June.' Ring a bell? As gadflies swarmed and dogs howled at the moon, Ireland's current crop of 34 year olds prepared for their own personal Stuttgart - a backs to the wall effort to overcome the Leaving Cert before it was 'dumbed down' for us idiot millenials, or so they claim while they use their perceived higher level of academic studies to bankrupt the country and destroy our future.

Ireland was at fever pitch. Euro '88. Ray Houghton. 1-0. Jack's Army. Though I was minus four for all of this, the temperatures were anything but.

The following summer was similarly warm. 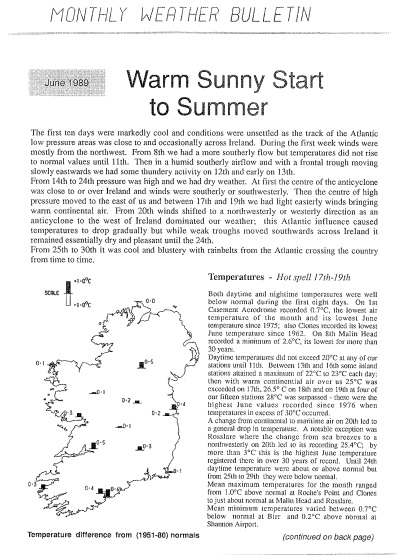 By the time 1990 came around, the weather didn't matter a shite. Ireland reached the quarter-finals of the World Cup in Italy and went on to meet the Pope. The sun faded, but the Celtic Tiger began to shine. Every day was sunny, even if it wasn't. June had brought unbridled joy for three summers in a row. Leaving Cert weather had embedded itself in our selective memory.

To this day, it retains its regard in Irish society, despite the fact that it's total garbage, as confirmed by Met Éireann consultant, Aidan Murphy:

Our weather can be so variable and unpredictable due to our geographical location. The weather on the first two weeks of June is just as changeable as any other time in the summer,

he says, in one fell swoop debunking the age-old myth.

So there you have it- there is literally no truth to the legend of Leaving Cert Weather; it's both a metaphor for the better times of yesteryear and used merely as a device of psychological torture to further ostracise an already vulnerable age demographic as they undergo the greatest challenge of their young lives. We're some craic, in fairness.

Thanks to Aidan Murphy and Met Éireann for providing some sense in this annual madness. And good luck to all Leaving Cert students as the sun streams the dank windows of your rotten school in the next ten days or so.

Travel
By CollegeTimes Staff
18 Perfect Places To Travel With Your BFF
Travel
By Dafe Orugbo
Bucket List: 20 Things You Need To Do Before You Turn 20
About Us ● Advertise ● Privacy ● Contact Us Powered by Publisher Plus
Next Page »