UPDATE: TCD Students Locked In Dining Hall Without Access To Food Or Water By College

Around 60 protestors campaigning for a Trinity College Dublin to not introduce fees of €450 for resit exams have been locked inside Trinity's main dining hall.

The college has brought in an external security firm to enforce the blockade around the Dining Hall. They are blocking the main hall doors which leaves the students still inside with no access to food or water and they are preventing other students from entering the building. They are however allowing any students locked inside who would like to leave to do so.

EDIT: They were originally blocked from accessing bathrooms in the building but have since negotiated access.

To ensure that no students try and sneak out and return without their knowledge they have apparently rigged alarm systems to the doors in and out of the Dining Hall.

UPDATE ON TCD PROTESTS: Students have been locked into the dining hall, no one is allowed in. Access to toilets, food, and water has been cut off. Please share, this is outrageous.

This is getting insane . Protestors locked into dining hall for protest over extortionate new fees policy. Solidarity with all. @thejournal_ie @rtenews @tcdsu #TakeBackTrinity pic.twitter.com/pnz7wBVE2T

Tried accessing the Dining Hall to support the #TakeBackTrinity activists, but was blocked by several security men who have closed the building. Two lads who had popped out couldn't even get to their belongings. Being told students in there can't access food, water or bathrooms.

College has shut down the Dining Hall. No more access to toilets or food. No access to the building for anyone. #TakeBackTrinity #OccupyTCD pic.twitter.com/l7tsbxrEHn

The campaigners have released a statement that indicates the doors have been locked and alarmed and the students can leave if they ask: 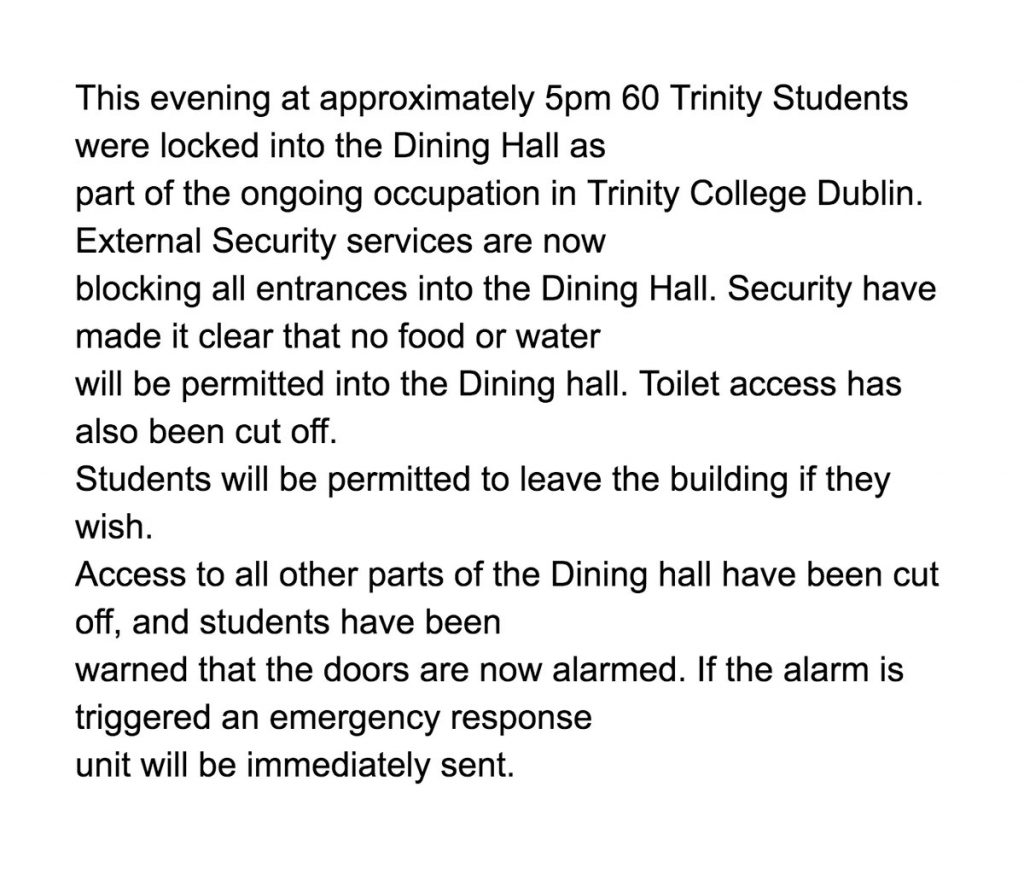 As the students are saying...

Trinity’s Press Officer, Caoimhe Ní Lochlainn, said in a statement to The University Times: “The students are not locked into the Dining Hall. They can leave at any time they want, and the College is taking all steps to ensure that the students inside are safe. However, we are not letting anyone else into the building, as there were concerns that large numbers of non-students had been invited into the building through an open call, and this would result in unacceptable risks for all concerned.”

Thanks to The University Times for their excellent reporting of the situation.