Our daily dose of Netflix is just about to get a whole lot better. At the end of this month and June, Netflix is bringing a whole lot of new shows and movies to our Netflix accounts. From documentaries to comedies, Netflix is covering all genres to glue us to our TV.

This ten part series that hones in on the unsolved mystery of the murders of rappers Biggie Smalls and Tupac. It draws from the experiences of two Los Angeles detectives who were both involved in trying to solve the murders, and also explains the similarities between both deaths, and conspiracies surrounding them.

This 4 part series recaps on the rise and falls of Donald Trump from the 60’s to the present. It starts from when his father invested “a small loan of 1 million dollars” in him, to his casino years in the 80’s, all the way to his turn to politics in recent years.

The Fab Five are back for a second season to revamp the lives of others Johnathan, Bobby, Antoni, Tan and Karamo are there to make over your life from food and wine to interior design.

After it was announced that the show would be cancelled, fans of Sense8 refused to accept it and wrote up petitions and letters to Netflix looking for them to keep it going. In the end Netflix agreed to do a two hour long season finale, which is going to be released this month. "Personal lives are pushed aside as the cluster, their sidekicks, and some unexpected allies band together for a rescue mission and BPO take-down in order to protect the future of all Sensates," according to Netflix's description.

Illusionist Derren Brown is back to mind boggle us and leave us in awe. In this show he “reinvents the concept of ‘faith healing’ through a series of stunts that debunk the confines of fear, pain and disbelief” according to Netflix’s description. 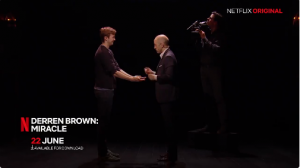 It will down to the last few contestants and we’ll be hearing Sashay Away for the last time this season. RuPaul, who will probably be looking as fabulous as ever, will choose the next top Drag Superstar and will be giving us life for the next few weeks until we part again until the next season once more.

Sir David Attenborough is back for the second part of Planet Earth, showing us some up close and personal scenes of our world and the animal kingdom in top quality HD.

8. The Story of God with Morgan Freeman: Season 2 - 1st June

With episodes like “Proof of God” and “Heaven and Hell”, Morgan Freeman travels around searching for different meanings of life, discovering different religions, and asking the big questions about life.

This is Matt Groening’s brand new 20 episode series that he’s created for Netflix. It follows the life and adventures of a hard-drinking princess, Bean, and her two side-kicks Elfo and Luci. The strange trio fight against ogres, trolls, imps and walruses in this adult sci-fi tv-series and we have to say, it looks class.

7 Bits Every Sassy AF Queen Needs In Their Home

Entertainment
By CollegeTimes Staff
Quiz: Do You Know The Words To 'The Morbegs' Intro?
185