You remember the 90s and 00s right? To me they are defined by two things, several Western-driven wars in the Middle-East predicated on a flimsy basis of pseudo-moralistic superiority, and the Vengaboys. Two key cultural and social touchstones which came to define the two decades - whether you agree with them or not.

Well, thankfully for, one night only, Punchestown Racecourse will stage an event to help us relive this time. I can't emphasise enough at this juncture just how much I'm talking about the Vengaboys side of things here. They are in no way planning on hosting some sort of large recreation of any of the Gulf Wars.

On July 27 2020 Punchestown Racecourse will transform itself into a haven of nostalgia. The clocks will be turned back, decades of cultural change will be washed away in an instant, and, for one night only, people can pretend that such acts as The Vengaboys, S Club (the three touring members at least), and Basshunter are still contemporary, relevant musical forces.

Just have a look at that date for a moment, July 27, 2020. Give a moment to savour how futuristic that sounds. Now, take a moment to appreciate just how far wide of the mark you imagined the future of 2020 to be. You presumed there'd be robot butlers by this point, didn't you? You envisaged flying cars hurtling through the streets. I very much doubt that your idea of the future, of 2020, involved heading to a temporarily repurposed racecourse in Punchestown so that you can watch East 17 perform some of their less forgotten songs from the early 2000s.

Yet, here we are, and I'll be damned if there aren't tickets available for this event. It's being billed as a one-day festival and will see a multitude of acts appear across four anachronistically named stages, the Main stage, Oldskool zone, Hip hop stage, and Pop stage. 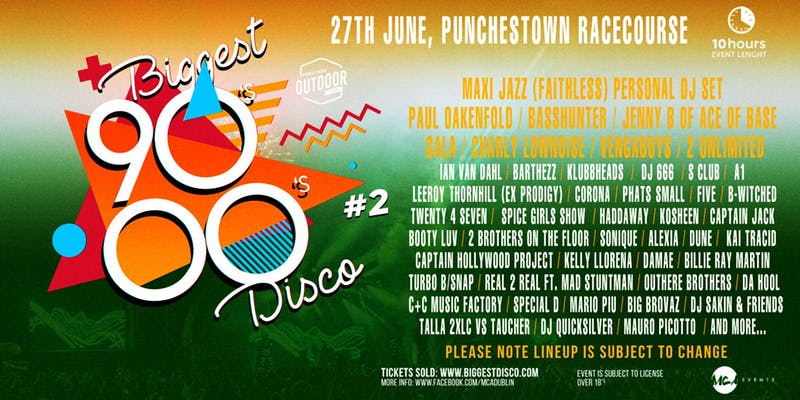 Tickets are set to go on sale at 10am this Friday, and are priced between €45 and €60. For the full line-up visit the Eventbrite page here.

Also Read: Freaking Out About What To Do After College? Here’s A Great Option For Tech Grads

Entertainment
By CollegeTimes Staff
Watch: The Backstreet Boys Reunite For Socially Distanced Performance
About Us ● Advertise ● Privacy ● Contact Us Powered by Publisher Plus
Next Page »