Theresa May Made An Absolute Balls Of Dara Ó Briain's Name

We all know how very difficult and time-consuming it can be to explain how to pronounce your Irish name. Well, it turns out it's not just your average person who struggles with diverse names. Theresa May, British Prime Minister, sent a letter to comedian Dara Ó Briain with an error that assumed he was two people that shared one body: 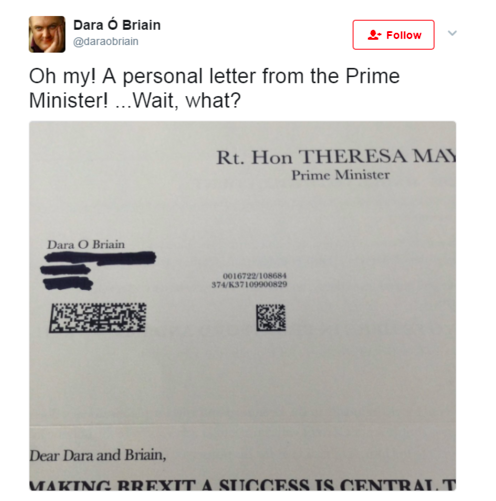 Irish names and our history can be a real struggle for some and it's not just the British, Americans, British, Australians or British people who struggle with the concept of Ireland being an independent and free state. The Guardian, a British newspaper, had this to say about Dara and Ed Byrne's new show:

Bravo @guardian telly review! Accuses us of cultural insensitivity, while in the same sentence subsuming Ireland back into Britain... pic.twitter.com/FhVRM2DcUR

The Guardian announced they corrected the error but said "white" and "men" still applied - how witty! (huhuhuhu!). Dara's no stranger to calling out people who refer to him as a "British comedian" and is a proud Irish man through and through:

Still one of my favourite tweets of all time...#DaraÓBriain pic.twitter.com/mMJwesqfIJ

Also Read: It Looks Like Coronation Street's Latest Death Is Going To Be Its Most Ridiculous Yet