We won't lie, when we first read this story we didn't think it was going to have a happy ending. It starts with a little girl who was worried about her hamster after it wouldn't move from one side of his cage for three days.

According to a series of text messages, shared on Twitter, the girl was worried as her hamster wouldn't "eat or drink or anything". So, like a good owner, she decided to bring her pet to the vet.

When the vet questioned the girl about any unusual activity happening recently, she mentioned that her hamster "escaped for a bit" but they found it under the fridge. Once on the vet's table, the hamster began acting normally and started "walking around, eating and drinking".

So when the vet prods a little further, he finds that the hamster has a feckin' "magnet in his cheek pouch". The poor hamster was stuck to the metal bar of the cage the entire time. 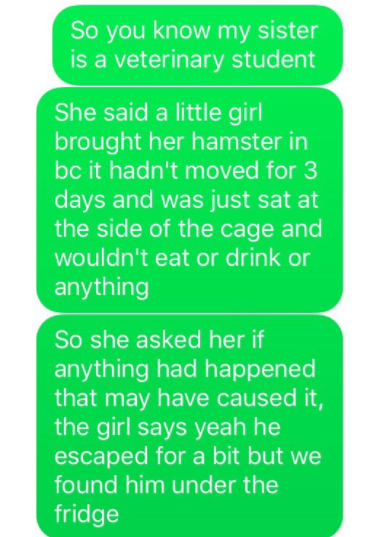 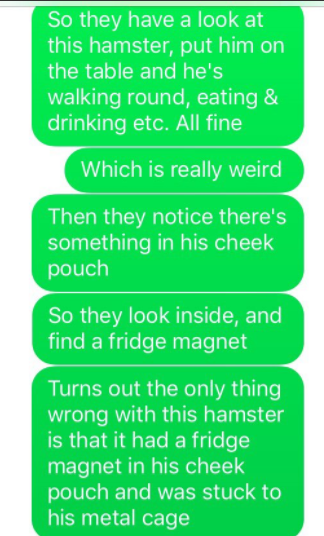 Terrified this hamster was going to end badly and now I am crying with a weird combo of relief and joy and something else I can’t name.

I'm very glad that story had a happy ending. It could so easily have turned into a fatal attraction.

I was preparing for a horrible conclusion and omfg.

We're delighted the hamster had a happy ending too.

Also Read: Irish Girls Are Lusting Over This Amazing And Cheap Skincare Brand