We challenge you to find an Irish person (or any person) who doesn't love the 1993 movie which follows the journey of Sharon Curley as she finds herself up the pole by her best mate's da dirty Georgie Burgess.

It's an Irish cultural touchstone packed to the brim with razor-sharp dialogue which we mimic time and time again when the film is shown on the telly.

However, beyond the one-liner gems  "Suppose a ride's out of the question?,"  The Snapper is poignant without being sentimental, as it explores the strength of familial bonds, particularly the relationship between an Irish father (played by the excellent Colm Meaney who earned a Golden Globe nomination for his role as Dessie) and his little girl.

And in the midst of all the Curley family madness, there are indispensable life lessons The Snapper teaches us.

It's an educational movie really.

Lesson 1: Don't risk the wrath of an Irish mammy

"Kay Curley gave her a terrible clatter". Irish film at its best #thesnapper

"It was a Spanish Sailor"

My favourite line from #TheSnapper 'How do you know he was Spanish?Or a sailor?He couldve been a Pakistani postman if you were that drunk!'

Lessons 3 and 4: Know your own worth.... without looking a gift horse in the mouth

Having gotten pregnant after a drunken one night stand with Mr. Burgess, Sharon decides she's going to go it alone and bring up her child by herself.

When Georgie offers Sharon money for some sweets, I mean drinks, insulted, she tells him where to stick it because she's a strong confident woman who can't be bought off by a tenner. 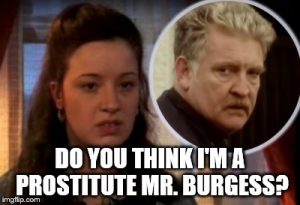 However, when he presents her 'panties' to her (Me knickers!) informing her he was going to show them to the lads, she rethinks her hasty decision and decides she deserves the tenner after all.

Lesson 6: There will always be people on hand to dish out some good old fashioned judgement..

Lesson 7: But when they do, hopefully you'll have a good friend by your side

Shockingly, Sharon's mate Yvonne wasn't too happy when she found out her mate's baby daddy was her own da so what did her and Mary do? They ditched her.

However, Jackie stood by Sharon through it all, sticking up for her against the haters. Friendship is fleeting and it's often when you're going through times of hardship, you'll find out who the good ones are.

If The Snapper was released today, we might be a little shocked if we got a glimpse of a heavily pregnant woman, hammered and giving it socks on the dancefloor.

But back then when it was socially acceptable for pregnant women to drink, after having had a few too many, a resourceful Sharon pukes into her handbag in the nightclub showing that a bit of quick thinking goes a long way. 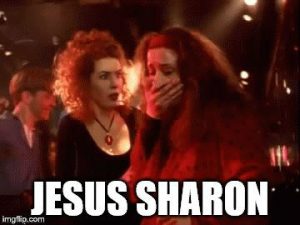 Lesson 9: Life is equipped with dopes

'The paper is my sisters.'

Lesson 10: When attempting to woo the opposite sex, try not to start talking about vegetables

Did you not see me over by the vegetables?

Georgie you smooth bastard. Watch the romantic scene below.

Lesson 11: Gardening shears have many uses

Lesson 12: Never make assumptions about weight (is that a baby or turkey?)

Lesson 13 of life lessons The Snapper teaches us: An old dog can always learn new tricks

The bedroom scene where Dessie shows Kay what he's been reading.

Can you think of any other life lessons The Snapper has?

Let us know in the comments below.

Read More: The 11 Irish Coming-Of-Age Films You Need To Watch