35 Struggles Everyone Experiences When They're Watching Pretty Little Liars

If you haven't seen Pretty Little Liars you're one of the lucky ones. The show is in its final season this year and you'll never understand the frustrations of watching it from the beginning and waiting, painfully, for all the answers.

PLL came into my life 7 years ago 'cause I was told it was an easy watch that was mildly thrilling. Well they were wrong! PLL became an obsession for me and so many of us who needed to join the dots and figure out the puzzle that was this show. It was never an easy watch. Not only was I part of a WhatsApp group to try and decode the many mysteries but there were several times I wanted to break the screen over the maleficent and ubiquitous character - A. Here are 35 moments anyone who has ever watched PLL will understand with some Pretty Little Liar memes thrown in for good measure:

1. Why is nobody telling their parents that a masked murderer wants to kill them?

2. Why do so many deaths happen in one town and nobody thinks it's a big deal?

4. Googling black hoodies 'cause they're actually quite fashionable

5. Not trusting anyone anymore 'cause everyone could be A

6. You're constantly torn between liking Mona and wondering is she secretly behind everything

7. The random characters that would suddenly pop into the show, convince us they might be A, like Jake, Sarah and Sydney, and then disappear forever

8. Wanting someone to die 'cause it would narrow down the suspects

9. They all look like they've just jumped off the makeup chair even though they're burying a body and hysterically screaming

10. Wondering why the parents are never around and assuming they're part of a weird A cult

11. Wondering why all the parents have slept with each other - again, insert weird A cult theories here!

12. The over spill of children that have been born to opposite parents but live next store to each other - it's all very confusing!

13. Wanting to stop watching but every episode is closer to another answer

14. Questioning your life choices as you sit and make a map of suspects of who A could be

15. The fan theories that were better than the actual show's storyline

16. When Cece Drake was revealed as the actual A we all saw it coming

17. When Jason hit on Cece, his sister, it made us all cringe for our lives

18. That time we thought Toby was A and Spencer joined the A team was the last exciting moment

19. Hanna Marin's fed up attitude is all of us who stuck with the show

20. The annoying text messages from A with silly red herrings that made us all even more frustrated

21. Realising how much time you've wasted thinking about this show 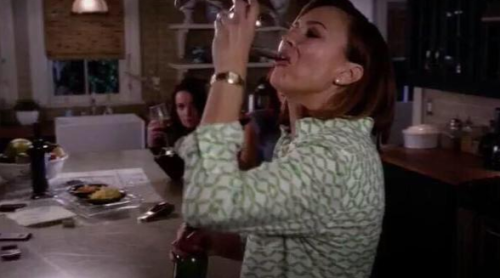 22. Finding it strange that Mr. Fitz would date a teenager #predator

23. When you think about what Ezra was actually doing for years: 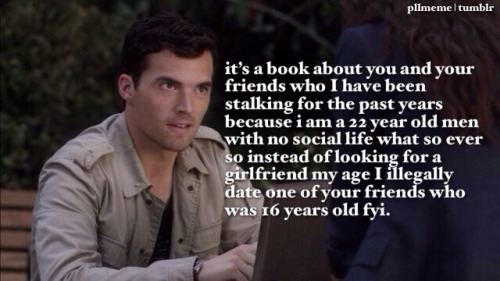 24. Why are the ladies always in the woods - alone?

25. Who the hell was Andrew and why was he even in this show?

26. Hate watching the show 'cause you're fed up with Marlene King for overstretching the material

27. Rolling your eyes when someone thinks Spencer or Hanna is Uber A but knowing it would make the show decent again

28. What is the point of most of the characters like Lucas, Emily's multiple girlfriends and that Doctor

30. Trying to figure out if Alison is good or evil is a task none of us asked for

31. Forgetting the actual premise of the show 'cause you're spending the entire 7 seasons searching for a clue about A

32. The constant close ups of all the girls gasping is far too frequent...

Pretty Little Liars begins its final 10 episodes on April 18th. Will you be watching till the end?

Entertainment
By Garret Farrell
Quiz: Who Said It, Gossip Girl Or A?
Entertainment
By Ciara Finnegan
Spoiler Alert: Pretty Little Liars' A.D Has Finally Been Revealed
Previous Next