They say there are two kinds of people in this world; 'winners' and 'losers', and for someone to win, someone else has got to lose. Well, they also say that what is true for people is similarly true both for annual festive-themed editions of a long-running talk show and for large porn-streaming sites. If I were pressed to say which of these two idioms I've heard spoken more often, I'd have to say the latter - but that is very much more of a reflection on the dire company I keep.

Last year, I remember seeing a story regarding The Late Late Toy Show which was so staggering that it - like some carnivorous worm made of pure disturbing fact - burrowed deep into my brain, where it has remained ever since. The story concerned the porn-streaming website Pornhub which, at the denouement of each year, releases a breakdown of its annual viewing statistics. In their statistics breakdown there is a section where they correlate drops in viewing figures within specific territories to specific sporting and television events; so, say during the Champions League final, they would see a drop of X% in European territories, and would then know that, their website traffic dipped during these specific times due to the fact that people were otherwise occupied watching the entirely wholesome spectacle that is the apogee of European club football - assuming the Champions League final continues with its current PG formula that is.

The truly harrowing fact that these statistics revealed was that, across every single territory in the world, throughout the whole year, the television programme which caused Pornhub's viewing figures in a specific territory to drop by the greatest percentage was, by some distance, The Late Late Toy Show. Now before, tentatively taking a look at how profoundly upsetting a fact that is. Here's the relevant infographic proving this fact - I think it goes without saying that we are at a stage in society where any reasonably well put-together infographic, made by the graphics department of a pornographic website, constitutes indisputable evidence of something. 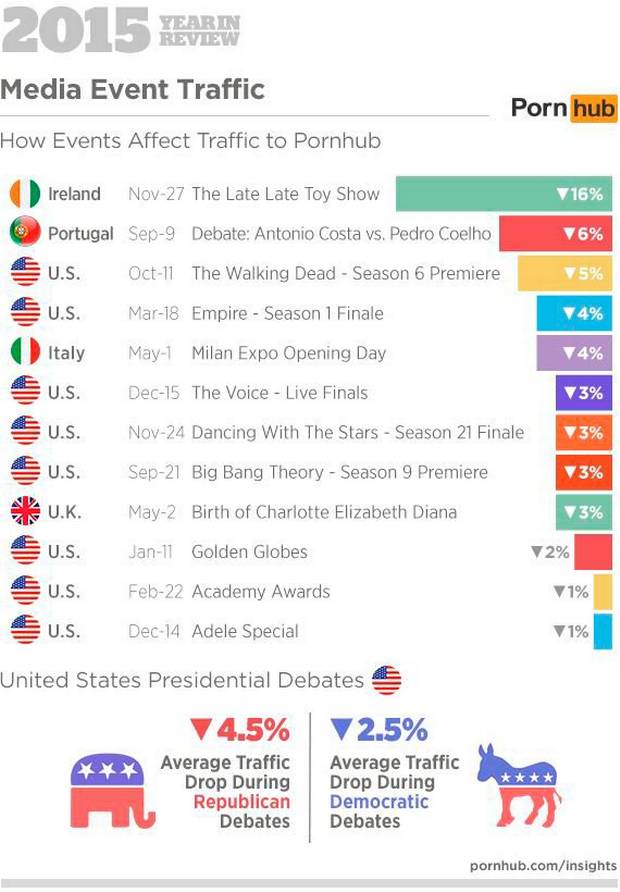 Now, firstly I should just say, given that they publish their annual insights at the end of each calendar year, we have yet to see what impact last week's Toy Show had. The above statistic concerns 2015's Toy Show, and is when the initial stories around this bizarre and terrifying correlation, first came to light in international media. "Surely, it could just be a coincidence?" I hear you cry. "An innocent Christmas coincidence." Well, I trawled through their 2016 insights and found that, no, it is not a coincidence at all.

Despite the fact that the Toy Show no longer retains its place at the top of the list, it still has a disconcertingly impressive impact on Pornhub's Irish viewing ratings. Though the figure has dropped from the 16% in 2015 to 13% for 2016's iteration of the beloved, and I can't emphasise this enough, family-themed festive bonanza.

Was 2015 was a particularly weak year for the Toy Show and consequently fewer people tuned in for 2016? Not even a little bit, viewing figures were up for 2016 not to mention that 2015's Toy Show featured perhaps the greatest moment to have ever occurred on Irish television. A little boy who had seemingly formed, as the entire basis of his personality, an adorably inane fascination with the weather - even going so far as to invent his own weather-based board-game - utterly kacked himself with joy when he was confronted with none other than television's Evelyn Cusack – ya know, of 'the weather' fame.

Maybe then there was a sizeable enough group who were so ashamed and weirded out at the uncomfortable fact of the Toy Show being on this list that, rather than watch the Toy Show as would be their custom, they sequestered themselves away, deliberately avoiding Tubs et al. To use every conceivable device in their possession to stream pornography so as to try offset the number of people who eschewed pornography in favour of the Toy Show. It's just a theory.

Despite how much of an evident poisoned chalice it was as an accolade, given the incredibly limited number of things Ireland can pride itself at being 'the world's no. 1' for, it is still somewhat upsetting to see that we have dropped to second place in 2016's list. I looked up what on earth 'Tartort' is and apparently it's a German police-procedural that has been running since 1970. Here is the trailer for the episode in question that proved so dang popular.

Also Read: The Viewing Figures For The Toy Show Are In And They're Huge

Entertainment
By Donny
Quiz: How Well Do You Remember 'Gavin And Stacey'?
1

Entertainment
By Donny
Quiz: Can You Complete The Lyrics To Maniac 2000?
1

Entertainment
By CollegeTimes Staff
The Oscars Nominations Are Out!
Previous Next

Entertainment
By Donny
Quiz: How Well Do You Remember 'Gavin And Stacey'?
About Us ● Advertise ● Privacy ● Contact Us Powered by Publisher Plus
Next Page »