A Week On From Halloween, It's Time We Talk About The Guy Who Shit In A Pumpkin

We occasionally experience things in life which are too bizarre, too traumatic, for us to process them when they occur. We need to allow ourselves time to digest these occurrences before we are able to come to terms with what exactly it was we encountered. Families often report that soldiers, returning from wars, will be reticent to talk of their experiences; so to will might people involved in serious car-crashes potentially go years without discussing what they've been through, the same also reportedly applies for anyone who has ever been forced to witness a Nickelback gig.

With that in mind, I think enough time has passed that we now confront a collective societal trauma of heinous proportions. Something which will go down as as one of the greatest travesties of the modern age: somebody took a dump in a pumpkin on Halloween.

I will grant you a second for that to sink in.

While I think we can all agree that the last few years have not exactly shown the world in the greatest light what with Brexit; the election of Donald Trump; the ever-escalating pleas of climate scientists for action to be taken - I think all of those undoubted travesties pale in comparison to the actions of this one man and his errant, defecating anus.

The image was posted to a Facebook group called 'Canterbury Residents Group', and was attributed as having been done at 'London Road Estate': 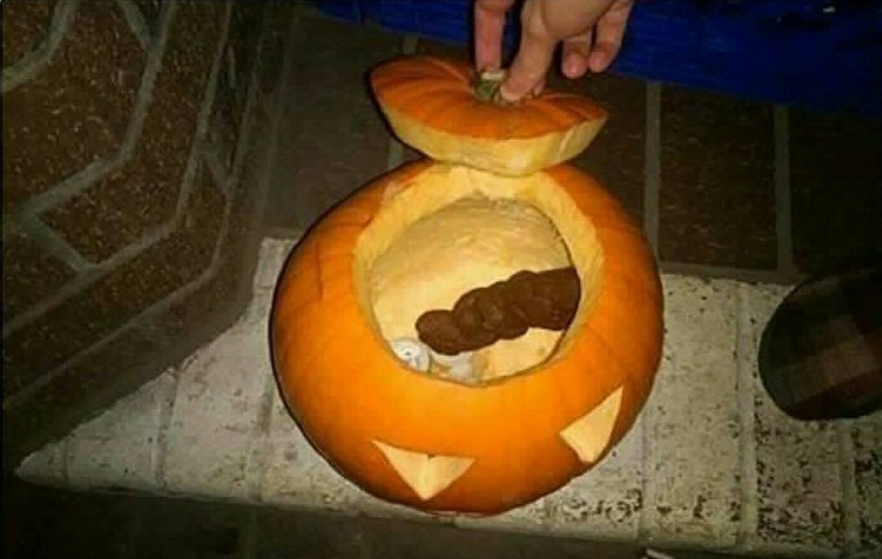 To examine why this has happened we must attempt to understand the mind of someone who would defecate into a pumpkin. We must seek answer, through little more than idle speculation, three fundamental questions:

I do not want to tar the whole world with one brush, nor project my own subjective experience of life as being the mean, the standard against which all others should be judged. There exists within the world a plethora of human experience, a myriad of views and perspectives which are as different to me as I would be to theirs. It is this diversity which gives humanity its strength. That said, I have never once looked at a pumpkin and thought, "yup, gonna take a shit in that," and I find it hard to imagine that this could be anyone's response when presented with a large orange gourd. It can only be concluded that such person harbours a deep-hatred of either pumpkins, or the owner of this particular pumpkin.

To, for a moment, be generous to the perpetrator in question, there is a slim but unlikely possibility that they may simply have been caught short. Desperate, out on Halloween night, perhaps dressed as a large papier-maché kidney or some such, they looked around in their moment of need and realised that, the least heinous solution available to them, was to remove the top of a carved pumpkin - perhaps carved by a child with joy in their eyes - and unleash an utter fecal apocalypse into the damn thing.

3) Why Shit In This Pumpkin?

We hereby come to the nub of the issue, the inescapable twin axis upon which our two most likely theories rest. Firstly, this may just be a prank, indiscriminately carried out against an innocent Halloween celebrant. The victim and their pumpkin may have just been in the wrong place at the wrong time and been targeted by this person whose idea of a prank, involves utterly befouling a pumpkin.

Or, maybe, it was an act of revenge. A perhaps appropriate retaliation for a past crime perpetrated against them by the pumpkin's owner. Perhaps they were driven to it, and justly arrived at the conclusion that the only way truly measured and apt means of retribution was to defile this pumpkin. In this scenario we can only speculate as to what was done to this person to elicit this response. I have been advised by the CollegeTimes legal department  - a magic 8-ball which only ever offers one answer from within its murky depths; 'you will be sued' - that it would be best not to actually suggest in too great detail what was done.

Edit: It seems that the photo was actually posted several years ago on Imgur, and the veracity of it seems dubious. Regardless of whether this pumpkin was sullied on this Halloween or on one previous, these questions still remain.

Also Read: 10 Things To Avoid When Going On A First Date