Sometimes, when faced with something so difficult; so off-putting; so staggeringly unpalatable, it can seem that the only sane and rational thing to do is to spend far more time and energy contriving an elaborate excuse for avoiding this obligation than you would otherwise have spent accomplishing the very task you are trying to avoid. These excuses can take many forms. If you are Donald Trump and trying to avoid conscription during the Vietnam War say, you contrive some elaborate, and non-medically verified, story about bone spurs on your foot. If you are my mother, and you are forcing me to sleep in the front garden for the third night in a row - due to the fact that you're still bitter that I shirked a promising degree in science to pursue a folly of a career as an online writer - you say that you did not hear the doorbell ringing, at any point, over the 3 hours. But that is neither here nor there. It is small fry compared to the truly pioneering work done by one student of the University of Manitoba.

I think we can all agree that exams are the bane of every university student's life. I mean, how dare any university have the temerity, the sheer nerve, the, dare I say, gumption* to systematically test whether their students are availing of the services and education provided to them - that they themselves are paying through the nose to access - is simply scandalous. As such it is to be expected that, with a test looming on the horizon, a student might redirect all their guile and ingenuity, which, far from being wasted on a degree, can be used to connive some means of avoiding the exam. It seems only logical that they might be driven to impersonate their university lecturer through email to falsely announce the cancellation of the impending examination.

I hate to use the all too worn phrase 'Well, that's exactly what one sociology student of Canada's University of Manitoba did', but unfortunately, in this instance, it is the mot juste.

A series of emails, shared by Aleli Miranda, a Twitter user and, seeming aspiring impersonator of WikiLeaks, detail this brief and wonderful debacle in all its majesty. The emails, arranged below in what I believe to be the world's first email-based triptych, are a joy. 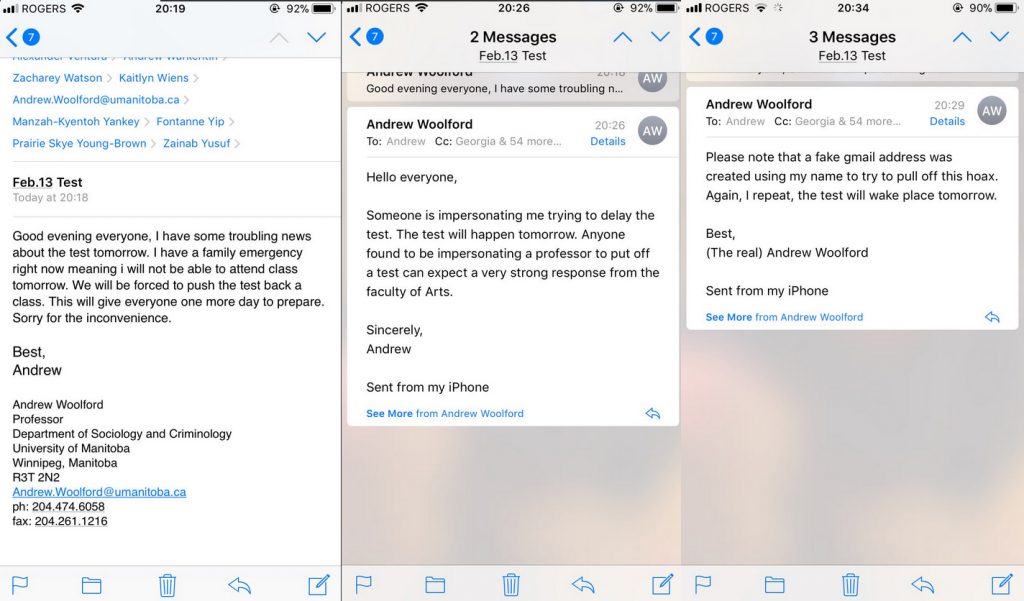 The first is from the student in question who apparently created a false gmail account to impersonate this Professor Andrew Woolford. The following two are from the real professor, whose emails actually seem far less official than those of his fabricated alter-ego.

Also Read: A Definitive Ranking Of All 89 Priests In Fr Ted

*After a quick google search of its definition to see if it meant what I thought it did, yes, I dare.

Life
By Kaili Sager
9 Tips To Help Save Your Sanity During Exam Time
Life
By CollegeTimes Staff
Opinion: 4 Essential Lessons To Learn Before Getting Your Leaving Cert Results
Life
By Garret Farrell
We Asked You For Your Most Embarrassing Exam Stories And You Delivered
Previous Next