Our idiot of the week goes to Jim Browne, a writer from Country Squire Magazine, who wrote an article entitled 'Get Stuffed, Eire' (Did you spot the misspelling already? It's actually Éire, Jim. Hold down on the 'e' button and you'll get it. Good man).

The trash talking article was written for the Country Squire Magazine who refers to itself on Twitter as a "ground-breaking magazine which post-Brexit provides “a platform for voices from the overlooked Great British Countryside”'. Yep, you can imagine the pure and utter shite you're about to be given. Here's the header image for starters, we've no idea if that's Jim's house or his imagining of what most Irish homes look like: 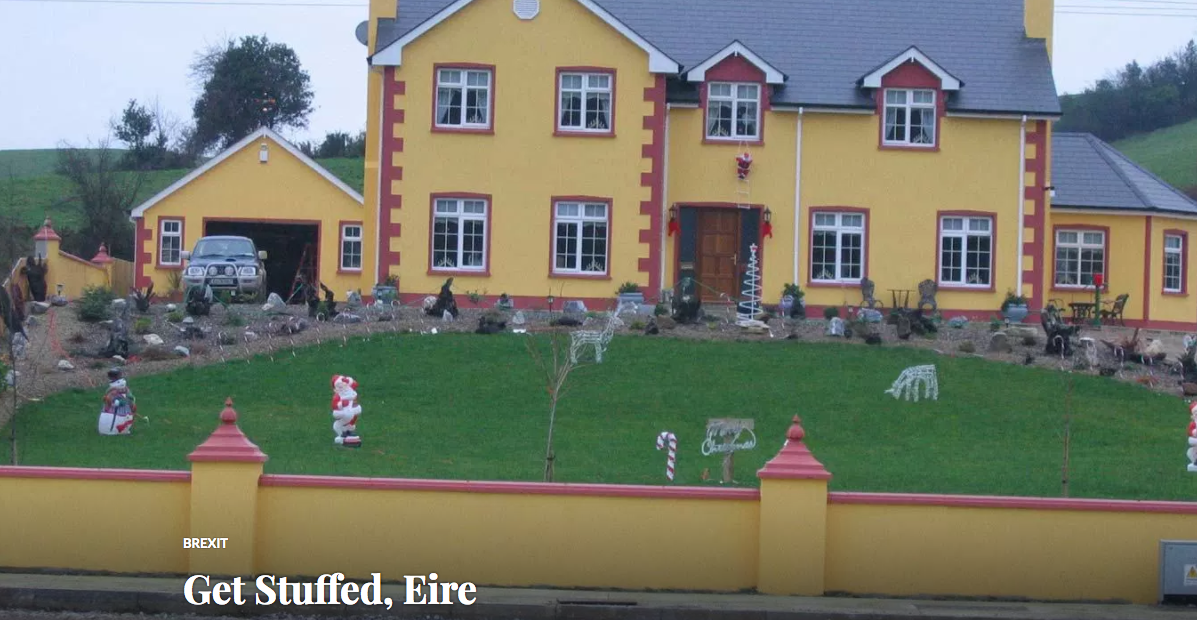 In a post about Ireland and the UK post Brexit, Browne had this to say about why Ireland will crumble post-Brexit and random Trump like facts about trade and exports. Grab a cup of tea, you're going to need it:

...The southern Irish – just like their northern friends Sinn Fein – can be trusted about as far as one can throw them. Nothing has changed.

Of course, Browne goes on to mention the uselessness of Varadkar and Bod Geldof - of all people he had to pick those two. Couldn't he mention Mickey Dee or Enya? Where're the talented people on this list Browne? Absolute shade:

The Irish Government under its latest lippy Taoiseach, Leo Varadkar, continues the Irish tradition of being bloody difficult...Varadkar sees Brexit as an opportunity to be a pain in the situpon. He has said the country will not “design a border for the Brexiteers” as his foreign minister said there was no proposal to make the Irish Sea the new frontier with the UK after withdrawal...Eire is the land of puppy farms, rain-soaked holidays, dingy bars, drugs mule celebs, verbal diarrhea and squeaky fiddles – that fool Bob Geldof comes from there. A “country” where the burglars from Britain with surnames like Kettle and Rafferty – return to build eyesore “palaces” in ratholes like Rathkeale (a small Irish town swollen by the proceeds of crime). Eire is bankrupt yet replete with EU white elephants (many unfinished as the money dried up to complete motorways and other infrastructure)...The country’s banking history is a joke – wasted away on a property boom and buying in furniture restoring old British castles for narcissistic Irish “entrepreneurs”.

Puppy farms eh? Your website supports shooting foxes for sport. Much of a muchness? FYI: It's a banjo, not a fiddle:

Eire’s history is basically British – before that it was a bunch of warring families and a corrupt church involved in an incessant spiral of gobshiteing and slaying – certainly not a nation. The best things in Eire are all British – amongst them Cadbury's chocolate, Jack Charlton and the English breakfast. Even their much-heralded patron Saint was a Brit and they had to kidnap the poor fellow – at the age of sixteen Patrick was captured by a group of Irish pirates who brought him to Ireland where he was enslaved and held captive for several years (one wonders if the plastic Paddies in Boston and Chicago who dye their rivers green know this?).

It's Cadburys, not Cadbury's. It's an Irish breakfast, not an English breakfast. For a man that comes from a country whose history is steeped in imperialism, you talk a lot about how Irish people capture and enslaved maybe one, possibly fictional, person.

Want to see some Irish loyalty? During the Falklands Crisis even Guinness considered turning itself into an English company and was prepared to drop all associations with Ireland.

If Britain wants to it can run Eire into the ground where there are no consolations – its spotty youths will brain drain again to the US and Britain and its economy will crumble. In a decade, after some bumps in the road, Britain and the North of Ireland will flourish...

Why so bitter Jim? Is it because we're great craic and you're going around with a poker up your arse?

The reaction on Twitter has been strong, as you can imagine, and heroes without capes offered insights into some of Browne's gas mistruths:

If you think that's all he had to say then you're wrong. If you fancy reading the entirety of Jim's post click here.

Also Read: Photo: A Shop In Mayo Isn't Taking Any Chances With Their Condom Stock