Ah, the Eurovision, the over the top, awful music extravaganza we all love to hate. Normally, we give out about Ireland not getting through, the insane outfits and the cringy jokes made by the presenters. This year, however, the one thing all Irish people were talking about was a tweet by UK Politician Nick Harrington; 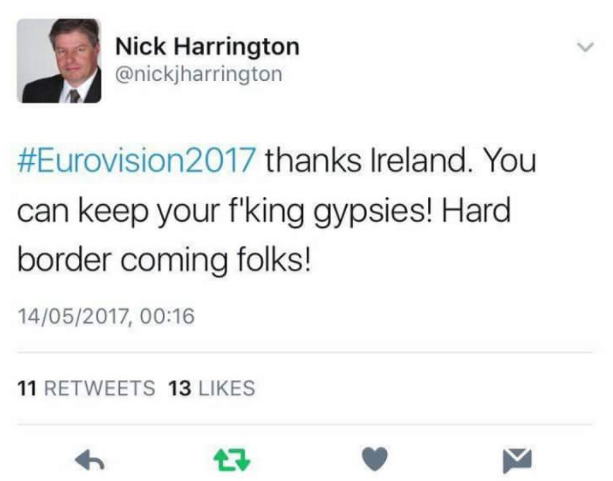 This tweet was as a result of Ireland not giving any points to Britain during the Eurovision. It, of course, made a lot of people angry and Harrington ended up deleting his Twitter account. He didn't get away that easily, however, as people took multiple screenshots of his tweets, which meant he ended up getting suspended.

This resulted in Harrington officially resigning yesterday, and his offensive tweet about Ireland and the Travelling community is under police investigation.

In a statement made yesterday, Harrington said,

To the residents of Stoneleigh and Cubbington Ward, on Saturday 13th May 2017, whilst watching the Eurovision Song Contest, I thoughtlessly sent a tweet that caused considerable offence to both members of the Traveller community and to those of Irish heritage.

I apologise unreservedly. My comments about the Irish border were also foolish. In addition, there have been comments about my Facebook post of an entry in a scarecrow competition last year which was based on the Olympics. I accept this was ill-judged for which I apologise to Christine Ohuruogu.

Therefore it is with deep regret that I formally tender my resignation as Member for Stoneleigh and Cubbington Ward effective immediately.

He added, 'I am devastated that I have caused these events and apologise unreservedly to all constituents of Stoneleigh and Cubbington Ward and to the wider public for the offence I have caused.'

Also Read: The New Star Trek: Discovery Trailer Is Out Of This World