If you didn't already think Donald Trump was a sleaze ball than you definitely will know. Headlines all over the world are concerned with one thing: Donald Trump flirting with Caitriona Perry. Caitriona is one of RTÉ's political correspondents in Washington.

The POTUS was on the phone to new Taoiseach Leo Varadkar when he motioned for the reporter to come forward. "Come here, come here! Where are you from?... Caitriona Perry... She has a nice smile on her face so I bet she treats you well".

Caitriona responded with laughter but no doubt her skin was crawling. Speaking to RTÉ she said:

One minute we were outside the window and the next minute I’m meeting the President of the United States. Usually we would shoot from outside the window of the White House and that’s what we were expecting today but instead we were invited inside to witness the President’s call to the Taoiseach. When we went in he was already on the phone but I managed to catch his eye and he called me over.

Catch his eye she did. Here's the obnoxious video in full:

The world's press, Trump's 'favourite' people, were quick to react. Both Time.com and The Guardian covered the story and focused on Trump's "she has a nice smile on her face" quote. The Italian news site Today's translated headline refers to Trump as being 'enchanted' by Perry. 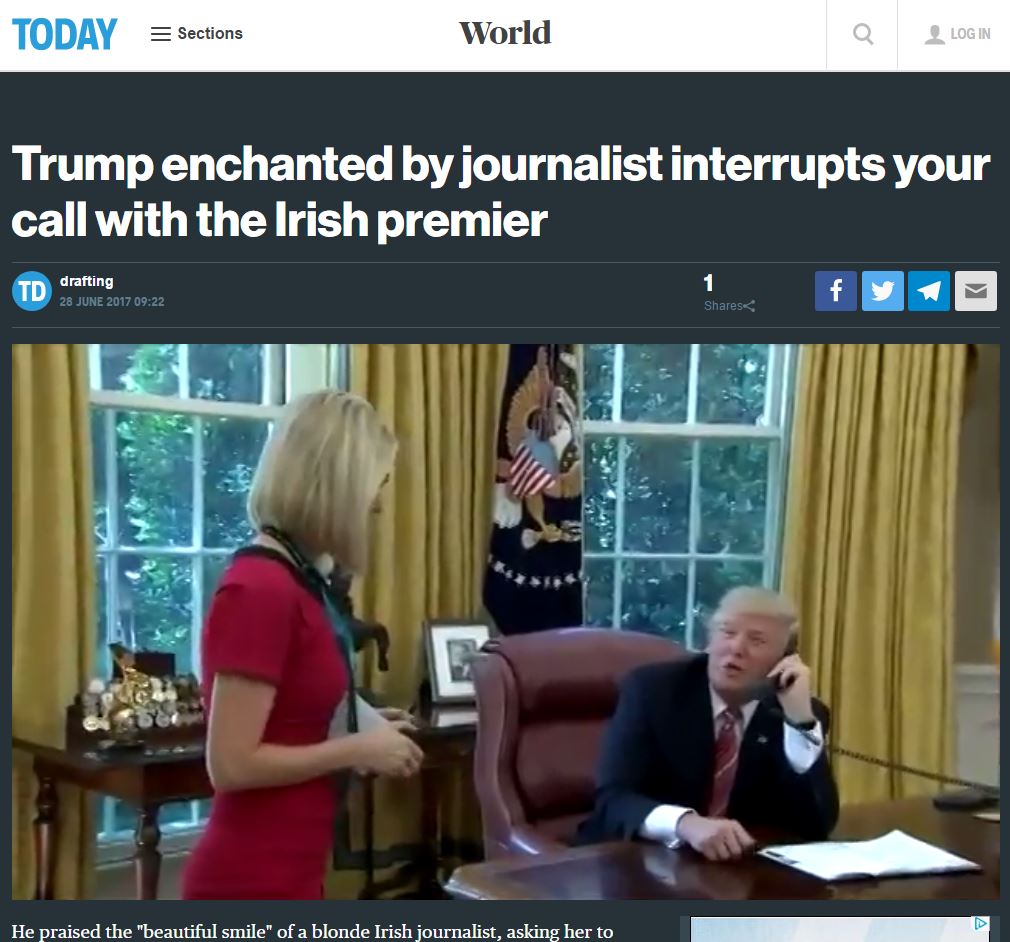 Meanwhile The Telegraph have the headline 'Did Donald Trump flirt with Irish reporter Caitriona Perry during diplomatic phone call?' in article which seems to be structured and written for anyone who might happen to Google 'Who Is Caitriona Perry?'

The website Heavy.com - probably for similar search reasons - decided to run an expose piece on Perry with " 5 Fast Facts You Need To Know". The website discussed how Perry is married and delves into her RTÉ background. But it then also goes through a couple of facts which seem to have been stumbled upon by going through her Instagram account. It also references a four year old interview with the Irish Examiner where she talked about fitness and her dream dinner guests.

This whole thing has quite quickly gotten out of hand!

Trump is known for casually dropping phrases in relation to women which he considers just "locker talk". Online publication The Hill mentioned that this is not the first time Trump has been inappropriate with female reporters.

It is not the first time Trump's interactions with female reporters have raised eyebrows.

He famously tangled with Megyn Kelly, then of Fox News Channel, during his campaign for the White House. He also singled out NBC News’s Katy Tur, whom he would sometimes refer to as “Little Katy” during campaign rallies.

Perry posted the "bizarre" video on her Twitter account and Americans were quick to retweet and apologize for his "deplorable" comments. Others suggested that if Perry had any issue then she simply could not accept a "compliment",

Video of the bizarre moment when President @realDonaldTrump called me over during his call with Taoiseach @campaignforLeo Varadkar. @rtenews pic.twitter.com/TMl2SFQaji

The most uncomfortable moment from the entire video was, possibly, Caitriona's powerlessness. In a room full of reporters and the POTUS Caitriona had to remain professional and polite. Sadly the same was not expected of the POTUS.

Also Read: AIB Have A New Shopping Rewards System And Here Are 7 Of The Best Offers

News
By CollegeTimes Staff
Students Receive Their Leaving Cert Results With High Inflation Expected Yet Again
News
By Hugh Carr
Report: €2.9 Billion To Be Invested In Third Level Education Over Next 5 Years
News
By CollegeTimes Staff
RSA Hoping To Move Theory Tests Online
Trending Now
Life
By CollegeTimes Staff
21 Irish Names That Are Never Spelt Or Pronounced Correctly
Travel
By Dafe Orugbo
Bucket List: 20 Things You Need To Do Before You Turn 20
Entertainment
By David Sweeney
30 Of The Hardest "Would You Rather" Questions Ever
Life
By David Sweeney
22 Embarrassing Moments We've All Experienced
About Us ● Advertise ● Privacy ● Contact Us Powered by Publisher Plus
Next Page »