10 Things Your Mother Will Definitely Say During The Snow

We're all housebound for the next couple of days which means we're going to reach peak cabin fever, with guaranteed rows between the whole family.

Who needs to listen to any weather forecasters when you've got mammy at home. She'll have all the know-how to see us through this cold spell. Here are just a few gems you're guaranteed to hear.

Well this theory, which seems to have existed in Ireland since the dawn of time, has evidently been proved wrong. Look at the snow now, Mammy!

There may be ten litres in the house but who knows when we'll ever get out to shop again? No cereal until the coast is clear.

''Now don't be setting foot outside the door''

You'll catch your death if you even stick your nose out. Don't be coming back in crying to mammy when you've gotten the flu.

Regardless of the warnings she gives the house your father will inevitably venture out for some reason and will cause your mother to have a canary.

"Shut that door, you're either in or out"

It's bad enough to go outside but to then stand in the doorway letting all the heat out, that's just not on. And it's not just the front door, the doors in between rooms are the same. You'll create a draught.

''Take that jacket off while you're inside, you won't feel the benefit of it when you go out''

This is a favourite no matter what the time of year. If you wear one coat inside then you'll have to wear a second coat once your out. 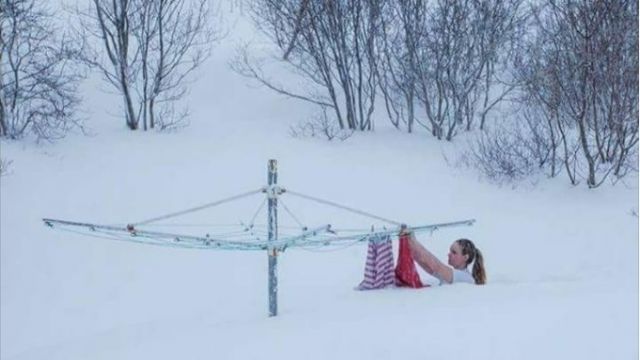 Snow or no snow, there's washing to be done.

If you're running off solid fuel then the next few days will be a procession of constant arguments about a) who's going out for the coal and b) rows about using too much of the coal.

There is no weather so cold whereby it can't be fought off with a good bowl of soup. Sure it's warm the cockles of your heart.

"I'll put on your electric blanket"

You didn't even realise you had an electric blanket but don't worry, mammy has one for you and she's turned it up to eleven.

Entertainment
By Rory McNab
One Year On: Remembering The Most Hilarious Moments From The Beast From The East
Entertainment
By Niamh Burke
Concern As Thousands Of Irish Wander Around In Pyjamas Following Storm Emma
Entertainment
By Mary Stafford
Watch: Dog Should Qualify For Winter Olympics 2022 Sled Team
Previous Next

Storm Emma beast from the east

Entertainment
By Rory McNab
One Year On: Remembering The Most Hilarious Moments From The Beast From The East
Entertainment
By Niamh Burke
Concern As Thousands Of Irish Wander Around In Pyjamas Following Storm Emma
Entertainment
By Mary Stafford
Watch: Dog Should Qualify For Winter Olympics 2022 Sled Team
Trending Now
Life 101
By Lauren Rol
59 Questions You Should Ask Your Tinder Match
Life
By CollegeTimes Staff
28 Weird Things Girls Do That They'll Never Admit To Their Friends
Life 101
By CollegeTimes Staff
24 Little Things Guys Can Do That Girls Absolutely Adore
60