This article was originally posted on April 16 2018.

The internet. Our master; our mistress; our overlord; our prison guard; our servant; our friend; our lover, our enemy. A portal to infinite waves of information, a vortex of fathomless depths into which we are all too ready to disappear. Its gifts to mankind are innumerable. It has allowed us, as a species, to, with unprecedented ease, do crosswords while taking protracted toilet breaks at work. Its power has delivered us access to Matthew Perry's filmography at the push of a button - allowing us to clearly see the downward trajectory of his post-Friends career. It presents us with the opportunity to watch home-made fitness videos filmed on a phone by a semi-disgraced British radio DJ. And today, it has coughed forth yet another gift from its bountiful depths, specifically from the Facebook page '50 Shades of Halifax'. 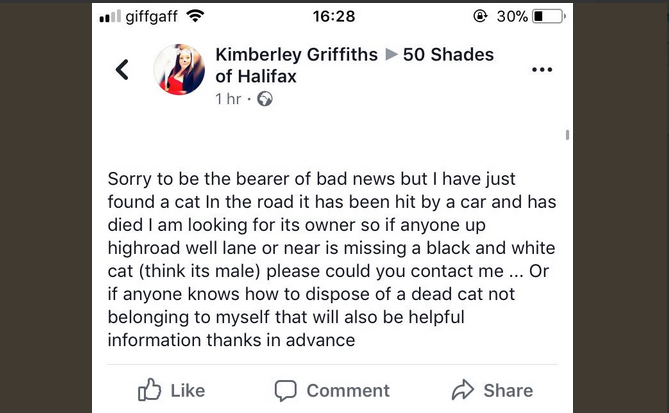 A woman found a dead cat on the road and, in looking to trace its owners, posted about it on the Facebook page '50 Shades of Halifax'. What happened after can only be described as 'one of the most beautifully bizarre comment threads in history', an accolade I think we can all agree, is as prestigious as it sounds. However, before getting to the sheer insanity of what transpired - which has driven me to have no choice but to write this article, we must take a brief detour; we must come off the main thread of this article and pull into the service station called 'What the hell is the Facebook page '50 Shades of Halifax'' about?

Theory 1: Let's start things off slowly here. The most realistic explanation is that it is simply a type of general noticeboard page for the town of Halifax. So far so good. However, we quickly run into the insurmountable issue of the name, 50 Shades of Halifax. This can only be a pun on the best-selling, quasi-erotic novel about sex slavery and dystopian gender dynamics, '50 Shades of Grey'. I think we can all see the issue here. 'Halifax' and 'Grey' are different words. There is no overlap. There is nothing that can in anyway be described as a pun. Surely, in the entire town of Halifax if they are looking to create a punningly titled Facebook page, somebody could come up with an actual pun. And yet, 50 Shades of Halifax. This unfortunately lends credibility to the next theory.

Theory 2: 50 Shades of Halifax is exactly what we're all thinking it is; a Facebook page dedicated and used by the S&M community of Halifax. Presumably, the typical fodder for such a page would principally centre on tips for some risqué moves for sexing; discussions around the merits of various rope gauges, and posts detailing sales in local hardware shops. While that's all well and good - I'm certainly not out to have a go at the S&M community of Halifax, and let it be known that I never have - but it raises a question equally as troubling as that raised by Theory 1. Why would Kimberley Griffiths, the woman who made the post we're all here for, having discovered the body of a recently deceased cat and staring down at the poor bruised, damaged body of the tragic feline lying cold on her Halifax street, think to herself, "I must let the S&M community of Halifax know about this. They are the people that this news must be brought to."

Whatever the purpose of the page, it is where she thought would be the most apt place to help identify this cat. Enter 'Filip Sklodowska'.

Within moments of the initial message being posted Filip chips in. In his haste he has overlooked some of the fundamental boundaries of mortality, and the S&M community of Halifax/ general populace of Halifax who have a broad range of sexual appetites, are quick to lampoon Mr. Sklodowska. Their pillorying method of choice? React emojis.

Not one to get left behind, Mr. Sklodowska, realises the folly of his request and apologises. Still curious whether the unfortunate cat involved is his, he asks whether Kimberley Griffiths managed to get a photograph of the cat before it died. Several other people on the page soon wade in, berating him for wondering how she would've known to take a photograph of the cat while it was alive - after all, how would she have known its demise was imminent? In a way though, Mr. Sklowdoska's request is not as absurd as these Halifaxites are trying to make it out to be. In a way is every photograph of a cat, not simply of a photograph of a cat before it dies. For all good things must come to an end - and while I think its up for debate whether cats can be considered to fall under the bracket of 'good things', they are all, undeniably, going. to. die. 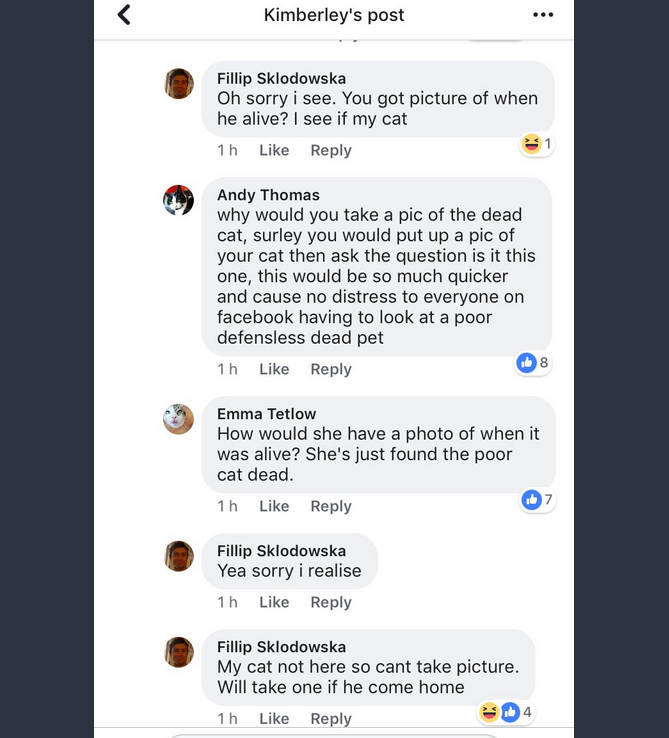 Suspicions are soon raised by other Halifaxians when it seems that Mr. Sklodowska, despite alleging to own a cat, possesses no photos of it. His offer, to take a photograph of the missing cat when it arrives home, is perhaps the most succinct and elegant example of a Catch-22-esque implosion of logic that humanity has ever proffered forth. 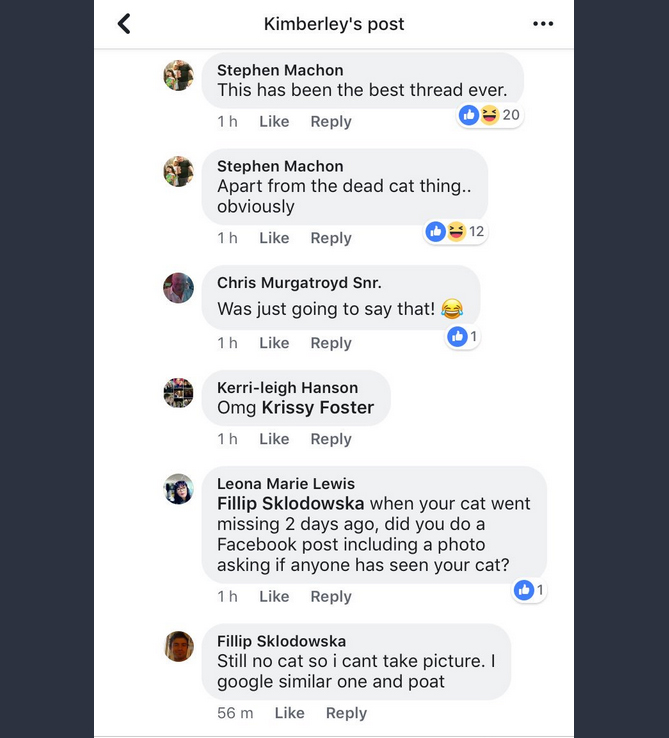 It is now that we come to the real meat of the issue, the true raison d'etre of this article. What happens next was my muse, my fuel for consoling myself through this day where, rather than being out enjoying the sun, I was here, trapped inside, at a computer. Trapped here bringing you news of a misunderstanding around a deceased cat. Trapped. Here. My one solace while I sit at my computer, knowing that this nugget was on the horizon, that this gem would be the fruits of my ceaseless typing. His attempt to find a suitable photograph of a cat similar to his own, led to Filip Sklodowska's finest hour. Behold. 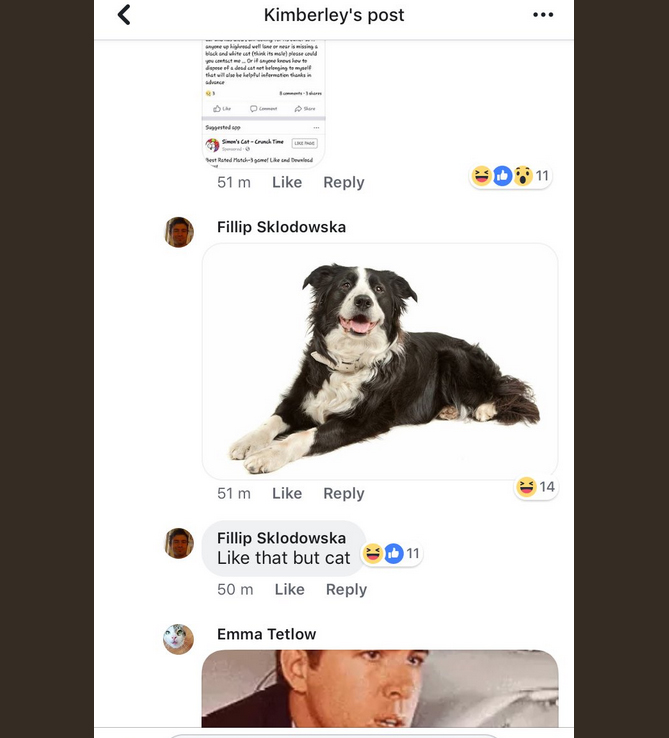 Naturally, with everyone hoping to help the cat be identified as accurately as possible, but without there being a single black and white cat photograph on the internet, people began chipping in.

Like. That. But. Cat. People will get tattoos of it, newborns will be christened it; it is the motto of a generation. We, all of us living now, are the luckiest generation to have ever lived, for we have been blessed to witness the birth of 'Like that but cat'.

Also Read: 10 Memes That Describe Every Night Out

Entertainment
By Rory McNab
Quiz: Find Out What Is Your Spirit Cat Breed?
1