Apparently, The Key To A Long-Lasting Relationship Is To Be 'Boring' Together

You gaze across the table into the eyes of your lover. The candle-light flickers in the gloom, its warm, trembling glow casting shadows that subtly dance across their face. A small smile spreads across their lips. There is a heavy stillness in the room; a sense of anticipation, a sense of standing on the precipice of something. The only movement is the slow rise of their chest as they draw gentle, long, breaths in, and the gradual release as they exhale, causing the candle-light to twitch, and the shadows to briefly flutter

They calmly, deliberately, place their knife and fork back on the plate, beside the last of the roasted otter you had made for them, at their insistence, because it was their 'favourite' - despite your own niggling sense that killing and cooking a wild otter might contravene several environmental protection laws - but you did it for them, for love.

They run a finger round the rim of their wine glass, causing small ripples in the surface of the deep, red wine within. "Say it again to me," they murmur, barely above a whisper, their voice low and sultry. They suddenly pick up the glass and throw back the rest of their wine, and, rolling the stem of the now empty glass between their fingers, continue, "Again, from the beginning." You lick your dry lips. The air feels hot, as if the flame has grown in intensity and all else in the room has disappeared, so it is just you, them and the swirling flame - and you begin.

"Well, the economic ramifications of the Second Boer War, were far reaching." Your lover thwacks their fist down on the table, their face a sea of ecstasy, "More," they bleat. You continue, "Indeed, to gain a full understanding of its impact, we must first come to understand the complex network of trade routes and economic practices that underpinned the British economy at the end of the Victorian era."

Such is apparently the key to a long and fruitful relationship, the true secret, is to be boring together. To revel in each other drabness, in their dullardly nature and not to rail against it.

Or at least, so says Mark Manson, the author of 'The Subtle Art Of Not Giving A F*ck' a contrarian, self-help guide which takes aim at the profligacy of self-help materials which avow that everyone should puruse happiness at all times. He says that one of the hallmarks of a successful relationship is the ability to be boring together. Speaking to Business Insider he said:

"I think, if you look at a relationship, I actually think it should be as boring as possible."

He says that the impact of social media, which has implicitly lead people to feel obliged to lead lives as 'interesting' as possible so as to be able to post bragging photos, is anathema to true happiness.

He considers that being comfortable with embracing routine and familiarity present the key to a successful couple.

"It's because that they were able to be boring together. They are able to spend year after year, sitting around the house, talking about the same boring stuff, watching TV, watching movies, cooking dinner, and it went fine. There was nothing exciting, there's nothing blowing up, there's no huge drama, and dishes flying."

He finishes by saying:

"It's an important thing for people to understand because I think, especially today, a lot of people — we don't want to be a boring person, like we really want to be interesting people and have interesting lives but the problem is that, that conflicts with what makes a relationship good in a lot of cases. A lot of cases, what makes you an interesting and complex person, makes you a really horrible person to be with romantically. In a strange way, I feel like we need to cultivate more boredom in our lives, like boredom needs to be okay again. It needs to be seen as a good thing and I think it's definitely a good thing for relationships."

So, rather than railing against those friends who you feel have disappeared from the world into a well of staying in with their new partner, know envy. Know envy for they, and their partner, and their superficially uneventful evenings in the company of one another; medically inadvisable amounts of snacks, and an in depth, multi-part docu-series on Edmund Hilary's attempts to summit Everest, represent happiness in its truest, most enduring sense; contentment.

And I think there can be no greater representation of this fact that, when I went to source a featured image for this post from a stock image library, upon searching for 'couple watching tv' every single couple were smiling. Each and every pair of models, who'd only met that day for the purposes of the photoshoot, were craddled, arm and arm, with grins of gormless contentment plastered across their faces, smiles that you rarely see on people who haven't been lobotomised. Just look at their gurning mushes: 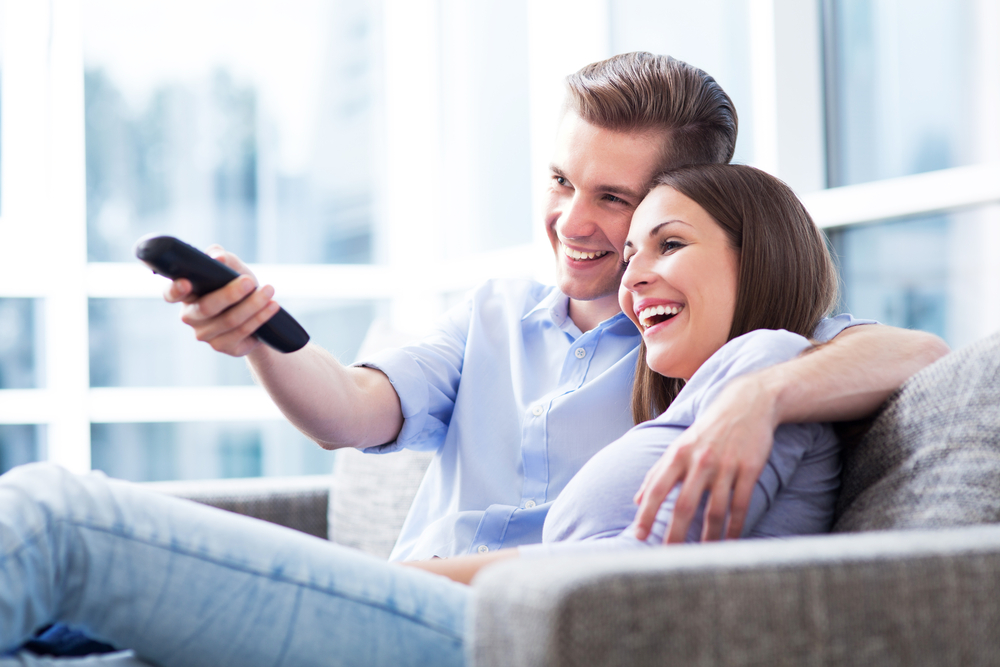 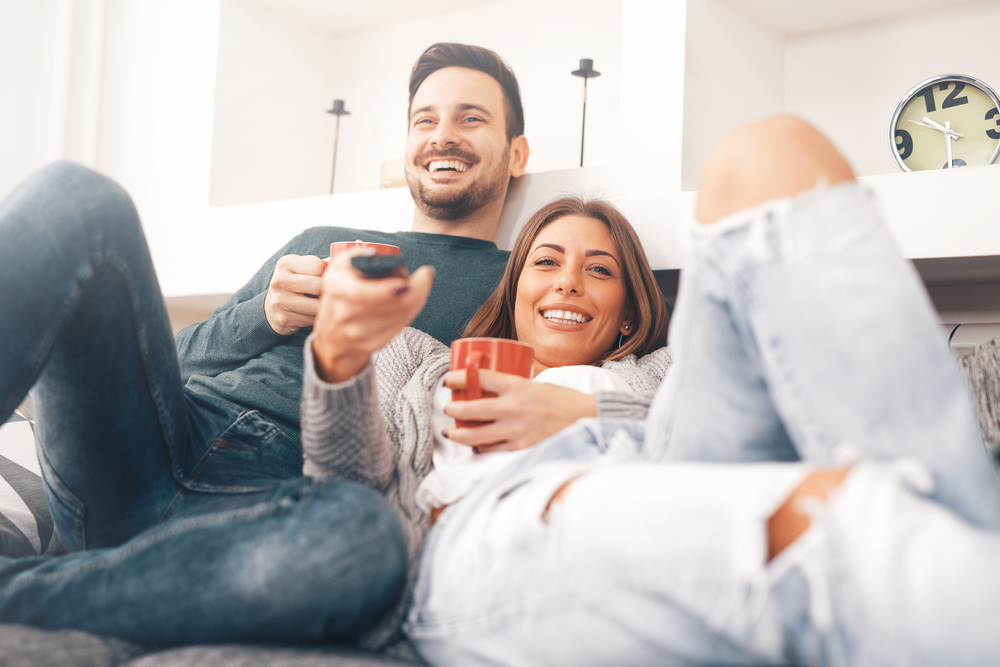 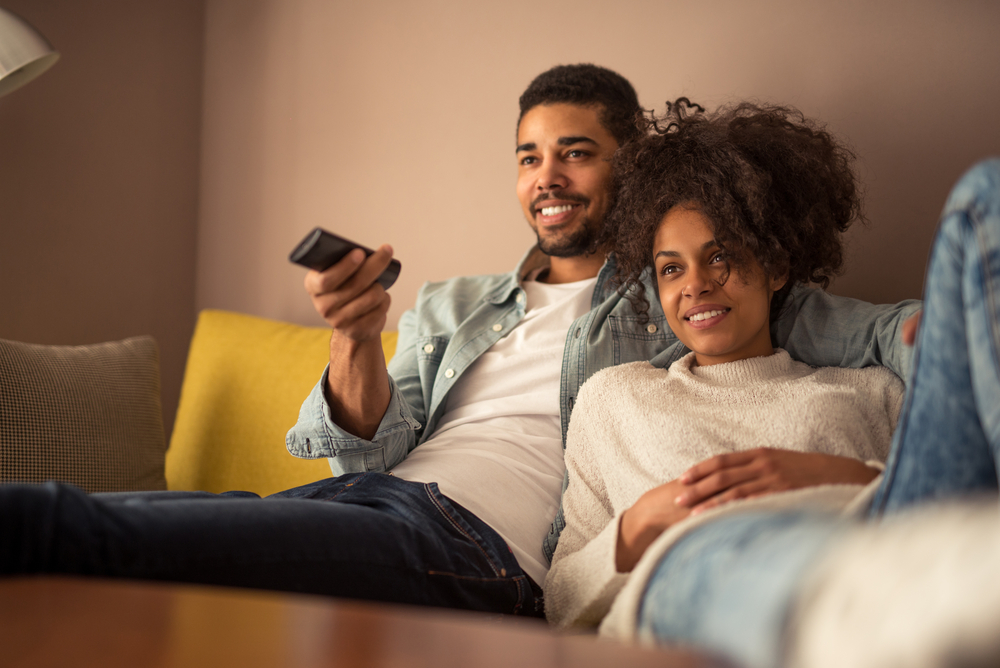 Yet again it has been proven that the greatest lessons in life are to be learned from stock image libraries.

Why Everyone Is Talking About The Priest On Last Night's Nationwide

Life
By CollegeTimes Staff
The Difference Between Your First Year In College and Your Last...
Life
By Kenneth Fox
Sh*tty Summer Jobs We've All Had
Previous Next