Was 'Bloggers Unveiled' At The Image Awards Last Night?

As an avid fan of all things Murder She Wrote and the detective genre, I was hooked on last night's Image awards and my new found obsession had nothing and everything to do with the beauty world.

Last night Bloggers Unveiled, an Instagram account that exposes influences who share misleading information, posted on their story they'd be spending their evening offline and attending an event. Soon after this post, it became clear that the figure cloaked in black - yes, we're re-imagining a scene reminiscent of A from Pretty Little Liars - was entering the Lions Den, attending the annual Image Awards to sit amongst the very people they'd been calling out on social media for months.

As the event kicked off speculation was rife that a lone wolf (or pack) hid amongst the flocks of influencers, searching for the next big scoop. In a series of photos that spotlighted their awareness of causing a stir, the masked figure revealed they were enjoying the food and celebrating their mission: 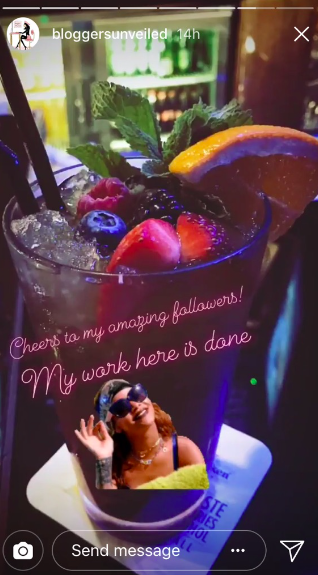 In a few brief moments of art imitating life or life imitating art and referencing everything from Gossip Girl to Pretty Little Liars, the online world lit up as hundreds of people tried to guess who was behind the controversial account:

LADS!!!
Whoever runs Bloggers Unveiled is at the Image Awards like WDF WHO IS IT!?!
This is a real life Gossip Girl!!!
Dan Humphreys were u ah? #ImageBOB18

If we're to believe the Instagram story, here's what we know from last night: 1) it's somebody from inside the beauty industry 2). the person enjoys cocktails and 3). the person may be a man. What's their motive? Jealousy? Revenge? Exposure? Why spend months calling out bloggers, makeup artists, and influencers who work in the same industry as you?

I think this person is above pettiness and truly fed up with the inner workings and politics of the beauty and the influencing industry and, thanks to Irish law, it's almost impossible for me to publicly name this person without receiving a lawsuit.

As it now stands the account is known for verifying an influencers following, questioning the integrity of a product, photo or selfie that's been shared by an influencer. Paul Stevenson, owner of the White Moose Café and an influencer who has been 'called out' a number of times on the account, recently claimed that he was behind the account but that's not possible.

Although it's been a thorn in the side of influencers up and down the country since its creation, Bloggers Unveiled has done some good work. As well as revealing the increased amount of comments being deleted by followers who query the influencer, the exposure of their information meant brands have discontinued working with certain influencers because of their social media complacency.

With a following that has surpassed many of the influencers and bloggers they've called out, it's anyone's guess who the person behind the mask is but it doesn't matter. They've already won. The name of their account is on everyone's lips and a looming reminder for the influencers to double check their influence.

Anonymous figure if you're reading this my hat goes off to you. You've given me something to write about on a particularly average Monday and I'll be following you very closely.

Also Read: My Problem(s) With The 'Vote No' Posters