"Has Anyone Ever Actually Made It To The Twelfth Pub?!" - International Students On Christmas In Ireland

Deck the halls with boughs of holly..Christmas exams are finished and thousands of students have packed up their rucksacks and migrated home for the holidays, including international students.

However, for all the students who will be doing the usual family stuff at Christmas, many will be spending the festive period miles away from their homes and often, Irish Christmas traditions are world's apart from what they're familiar with. 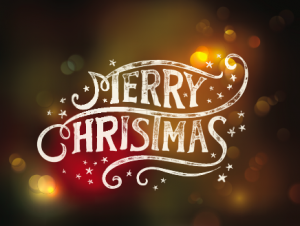 According to Melda Slattery, Head of Public Affairs at Dublin Institute of Technology, the college's student body is increasingly diverse - with over 1000 students from 57 different countries.

In the run-up to Christmas, the college hold an ‘End of Year Celebration’ as a way of helping international students get into the Irish festive spirit. She says while most EU students go home for Christmas, those from outside the EU tend to stay in Ireland.

And although she can't offer a definitive opinion on how foreign students view Irish people - "I don't think we can generalise" - she is essentially positive about their time spent here, describing them as "fantastic," particularly those who have to deal with big cultural differences as well as the challenges of studying in another language.

It’s an encouragement to them to opt for opportunities to study or work abroad but it is also a huge advantage to learn to collaborate and develop an understanding and empathy with people of other cultures as many graduates will work in an international context in their future careers, whether they are based in Ireland or go abroad.

No one wanted to leave us on our own for Christmas 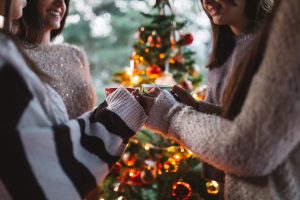 Esther Kleise 21, is studying Science and Nanotechnology in DIT and is from Rotterdam in The Netherlands. She says that we tend to place more of an emphasis on Christmas in Ireland compared to where she's from.

I feel that in Ireland, Christmas is a big deal because of the religious aspect. Many of my friends go to mass on the day, even if they're not religious themselves. Back home that's not really a thing.

Esther, who has been living here for four years, considers Irish hospitality to be alive and well, especially over the festive period.

Although she'll be travelling home for Christmas, she says in the past, Irish families have invited her and her roommate round for dinner on the day, adding: "No one wanted to leave us by ourselves over Christmas which is amazing. Irish people are very welcoming and will always offer to have you over."

The overall feel of the city over Christmas is just wonderful

She says she had a great time taking part in one of the most important festive traditions in recent years - "Has anyone ever made it to the twelfth pub?" - but ultimately gave up after pub number four 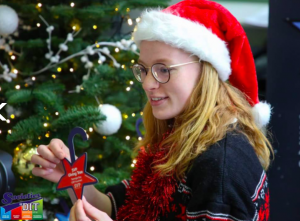 Esther at the DIT Christmas appeal

Esther's particularly passionate about being involved in the DIT Society, namely their annual Christmas Appeal. She believes that charity in Ireland is generally more personable, with students buying presents, planning events and going out in the cold with buckets and Santa hats to show their support.

Irish people, in general are very lovely and welcoming, but that is especially the case around Christmas time. It really is a time to be merry and it shows all around the city.

The beautiful lights on Grafton Street, the Spire all lit up, and the overall feel in the city is just wonderful. It seems that everyone does their part in making sure everyone has a great Christmas and I think that's amazing. 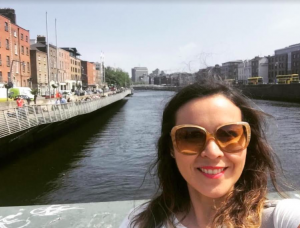 Gabriela Pacheco is an English language student from Chile and this is her first Christmas on Irish soil.

She arrived in Dublin in March this year, along with with her husband, Jaime, and her son Diego, 12. For Gabriela, 31, moving to a country over seven thousand miles away from home was a challenging, but ultimately exciting experience. The student was immediately struck by the "kindness" of the Irish - and she hits the nail on the head when she says we're overly apologetic.

They (Irish people) always say 'Sorry!' which seemed unusual to me. They respect spaces and people very much - they're always so polite and friendly. And obviously they're great for the parties - they really like to have fun.
The 12 pub tradition is crazy! Who survives 12 pubs? Only Irish people apparently!

Much like the rest of us, Gabriela will be having a quiet Christmas Day at home with her family. "In Chile, Christmas is summer, so it will be our first Christmas in winter, which creates a different atmosphere." 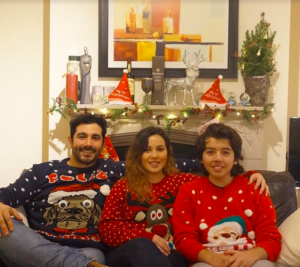 Gabriela getting into the Irish festive spirit with husband, Jaime, and son, Diego

Homesickness
Gabriela will video call her family in Chile on the day, which will hopefully keep a lid on any major homesickness.

The truth is that I don't know how it will be because we've never spent a Christmas away from our families and I tend to be a little sensitive. I feel that it's all part of the adventure though.

She says that festive traditions differ slightly where she's from-  a family dinner on Christmas Eve and a barbecue with everyone, including grandparents, uncles, cousins and grandchildren on the day itself (it's all about the food in Chile). It's also customary to open the gifts on Christmas Day at 12am in Chile.

The student says she has never seen anything like the Christmas atmosphere in Ireland, describing it as "fascinating"  and citing the ornate houses, street decoration and giant Christmas trees as some of her favourite things about the holidays here. 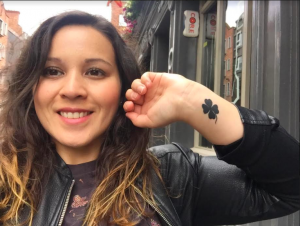 Gabriela's journey as an international student is nearing its end - along with her family, she will return to Chile in January and start all over again, something which she feels bittersweet about. She says:

It's a dream fulfilled and has far exceeded my expectations. My English has improved immensely and I'm even reading books! I never thought I would make it.

Describing it as one of the "biggest, most important and challenging" experiences of her family's life, Gabriela says she is especially proud of her son, and husband who spoke zero English when he first arrived.

It's going to be a big change when we go back to Chile but I know we have an enormous capacity for adaptation. Although I'm said to leave Ireland, I'm enormously grateful for the time I got to spend here and for the people I met along the way.

Also Read: The Amount Of International Students Here Has been Revealed