Watch: Student Visibly Dies Of Shame After Mum Kisses Him On Live TV

There will come a time, hopefully many years from now, where we - all old, frail, with our bodies failing us - are staring into the void. As we feel the ultimate darkness closing in around us with our corporeal form slowly melting into the expanse of eternity, we will - by all accounts - be faced with flashes from our past. Brief but intense intrusions of significant memories will surge into reality as our ailing synapses fire erratically, conjuring memories so vivid as to almost seem that we are reliving them. Milestones: first kisses; first loves; achievements; births, and deaths will all tumble through our vision, a kaleidoscopic view into everything that made our past memorable, everything that made our lives worthwhile. And we will watch, both the protagonist and the sole viewer of our own movie, as the highlight reel of our lives unspools before our eyes. Well, for one Scottish student, first and foremost among the memories to career across his vision will be the time that he appeared on a live BBC broadcast to receive his A-Level results, prompting his mum to storm onto camera and kiss him repeatedly on the cheek.

This moment, the profound sense of embarrassment that Fraser, the student in question, suffered is near incomprehensible to those of us who have not had our mother enthusiastically kiss us on the cheek during a live broadcast on national television. Think of it, think of the most embarrassing thing that has ever happened to you. Roll it about in your mind, feel the nausea and anxiety twist your stomach into a knot as you relive it. Perhaps you soiled yourself on public transport; perhaps you accidentally called a partner by the name of an ex during coitus; perhaps you once accidentally vomited on a dear friend's prized show-dog - whatever it is you are imagining, it almost certainly pales in comparison to what Fraser has gone through. It almost certainly pales in comparison to the purest form of shame imaginable - which can only be truly suffered as a teenager, a time when you are essentially little more than a sentient bag of anxiety and potential embarrassment - having a parent gushingly fawn over you on live television.

Just watch the clip. Drink it in. Watch as Fraser, a seemingly well to do, perfectly affable and upstanding student, goes from being flushed with pride at having just learned that he has received five As in his A-Levels - a thoroughly commendable achievement indeed, to being so consumed by shame that we can visibly see it tearing his very flesh apart as if it were a shoal of piranhas. These piranhas however do not feed on the flesh of the living, no, they feed on the well-being of beleaguered Scottish teens, turning any sense of self-assurance into hot molten shame. Watch his mum rush into frame at around the 00:40 mark.

The journey of emotional ruin that we see etch itself on Fraser's face, as his beaming mum clings to him, is the purest form of embarrassment, the most concise and explosive expression of what it is to be mortified that has ever graced this earth. Dictionaries should all band together and agree that their current definitions of 'shame' and 'embarrassment' are now redundant. They ought be scrapped and simply replaced with this photo of poor Fraser. 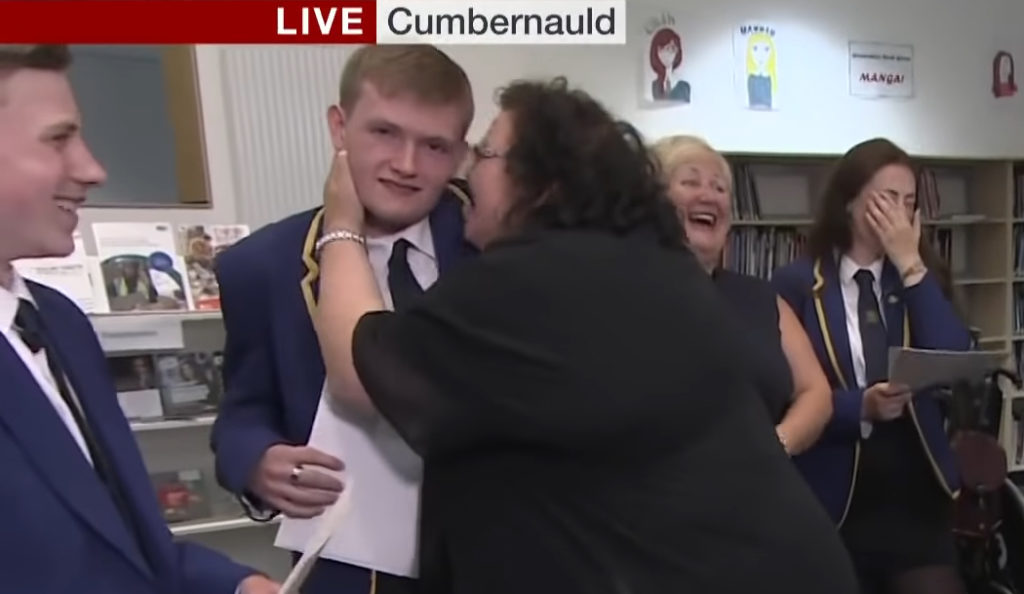 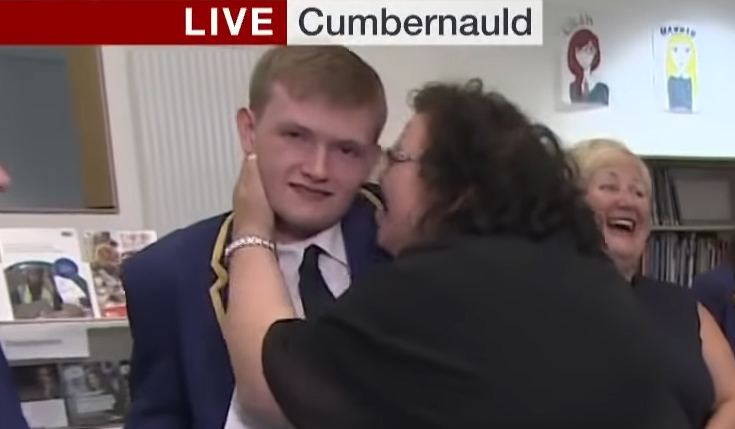 Or actually, this one. 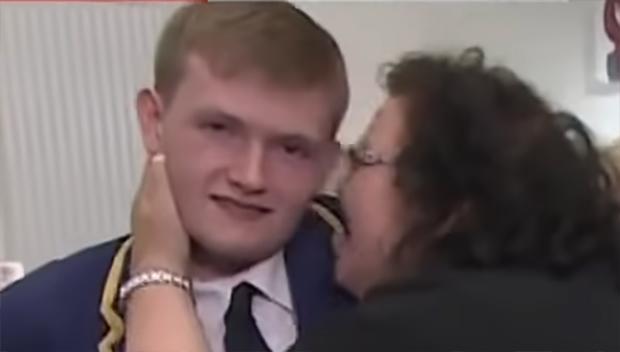 Try and rebuild your life from this moment dear, sweet Fraser.

Also Read: Krispy Kreme Is Giving Away Free Doughnuts In Dublin This Weekend