Has This Kerry Hotel Made The Worst Vegan Breakfast In History?

People who've chosen the admirable path of becoming vegetarian or vegan are no strangers to having to put up with largely underwhelming dining experiences in many restaurants. In spite of the rapidly growing popularity of such diets it is still all too common to realise - having perused a restaurant's menu searching for those items neighbouring that elusive small green 'V', - that the only main available to you is a seemingly very underwhelming salad or some utterly bemusing re-imagining of a meat-based dish, like a carrot wellington. Often, the only recourse to getting something vaguely appetising is to ask the waiter to customise a meat-based dish on the menu to make it suit your dietary needs. Your waiter will, at this point, fold your menu under their arm and, with a knowing wink, say "Don't worry, I'll have a word with the chef."

Such was the experience of one Derek O'Brien who was having breakfast with his boss in a hotel in Killarney - let's not explore this relationship any further and take the circumstances which led them to breakfasting together as being wholly platonic. After his boss requested whether a full Irish breakfast could be adapted for vegans their waiter assured them that this was indeed a possibility.

At this point one's mind naturally wanders to some of the available alternatives - vegan sausages, hash-browns even, a greater helping of the already vegan components of the breakfast etc. These would seem to be among the safe-bets you'd consider that would be in the arsenal of a hotel's pantry.

However, after a ten minute wait, this arrived. 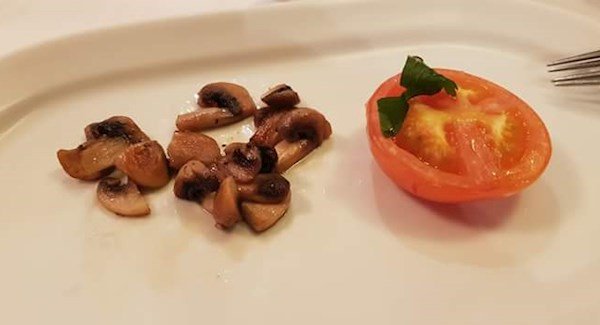 This. This is the worst breakfast that has ever been devised. This looks like the breakfast served in an up-market prison. This looks like a meal demanded by a particularly fussy-eating and obnoxiously middle-class child - I'm thinking specifically perhaps of one of Chris Martin and Gwyneth Paltrow's brood here. This is a meal recommended by some fad diet that was popular in the '90s and endorsed by a low-grade celebrity who ended up in court after several people following it filed lawsuits after developing Ricketts. This is some mushrooms on a plate with half a tomato topped with a piece of ambiguous garnish.

The garnish warrants further inspection. We can imagine what transpired in the kitchen, as the waiter and chef looked down at the paltry portion before them. A small cluster of mushrooms, that are somehow lying about on the plate in a way reminiscent of a massacre and the glistening, soggy, demi-orb of tomato, shameful in its bareness, its nakedness. They looked at this and thought, "It needs something. This work of art is as yet incomplete. But what? What is it crying out for?" In a moment of inspiration the chef would've then reached for an adjacent herb-box labelled 'ambiguous garnish'. Thus adorned, he would've looked down at his creation, his eyes damp with tears of pride and whispered, "Perfection is elusive, but unmistakable when seen." And he would've waved for the waiter to deliver his charge to the table, knowing that he had yet again tasted success.

This is not breakfast, and should not be allowed to ever be described as such. I have done the maths on this. A medically recommended portion size for an average breakfast ought to consist of beween 250-400 calories, depending on your age, weight, activity level etc. Half a medium-sized tomato contains around 11 calories, while, and I'm being generous here, 50 grams of mushrooms contains the same. Assuming that these have come within spitting distance of a frying pan, we'll say that being cooked in perhaps 5ml of oil has added about 50 calories. This comes to a combined total of about 72 calories. This is only slightly more than a quarter of the amount of calories than should be contained in even the meekest of breakfast that would be given to an incredibly inactive, small child. It is therefore not a breakfast, by any contemporary medical or nutritional metric.

What does this tell us? That I evidently have too much time on my hands in work on a Monday morning if I'm calculating the calorific content of half a tomato? Yes, almost certainly. Does it tell us anything beyond this? No, nothing really of note.

Also Read: 5 Ways To Beat Homesickness When You Start University