Why Love Island Fans Should Know About The Body Positivity Movement

“And I said to my body, softly, ‘I want to be your friend’, and it took a long breath and replied, ‘I have been waiting my whole life for this.’”- Rupi Kaur

While you're watching Love Island, scroll through Twitter. The self-loathing about one's body is never more obvious than when ITV2 screens the most talked about reality show in a decade. We might laugh at the countless self-deprecating jokes that pop up on our newsfeeds as harmless but they become part of our culture. Worryingly, Love Island is no one's reality and its promotion of certain bodies only helps the prevalent culture of body shaming.

The reality is it's impossible to uphold perfection without being a victim of body shaming too. During the contestants VTs, Niall discussed how his ears had to be pinned back to stop the bullies and the newest contestant Megan has reportedly spent over €25,000 on surgery.

The Love Island producers don't look for chunky or hairy bodies or a cast that reflects the diverse society we live in. If Love Island was a reality, mainstream attractiveness would be white, young, tall, hairless with toned abs with zero percent body fat. Like so many mainstream shows, white bodies take precedence in the villa of love and women's bodies become heavily monitored by the public. How many times have we seen Samira, a person of colour, questioning her worth? Laura's age has been a constant debate since the show began. In fact, the men of Love Island fit such a mold that it can be, at times, impossible to tell them apart.

Mainstream attractiveness is worth a lot of money. The diet, beauty, and cosmetic surgery industry are worth billions to the economy. The Advertising Authority in the UK has called for an ad promoting plastic surgery during Love Island to be banned. Thankfully a number of heroes are pushing back with body positivity, a movement to accept your body for what it is and to help others become comfortable in their own skin.

Louise McSharry, DJ, and columnist hit home with her most recent Instagram post. Louise, a body positive activist, wrote about growing up with feelings of inadequacy towards her body and not wanting to pass that on to her own child: 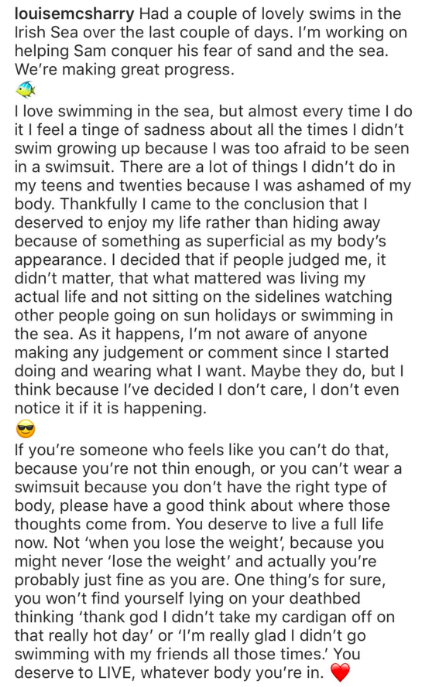 Louise struck a chord with myself and so many others who've struggled with body image. I remember being eight years old and not taking my top off at a pool party, conscious of my puppy fat.  It's terrifying that in 2018 children are still susceptible to this - boys and girls.

The body shaming of men has become a more recent trend. No doubt the more women who stand up and refuse to accept the ferociousness in which their bodies are monitored, more men will benefit from this. With that in mind, it's crucial for men to stand up and support their sisters. Body shaming and slut shaming often go hand in hand.

On top of the shame, medical professionals must acknowledge their part in body shaming. 'Lose weight' is a common saying by doctors if a person is above their BMI (the body mass index that does not reflect multiple shapes and sizes) yet all too often, the difficulties of actually going through with this are glossed over. Rarely are the people who this advice is doled out to provided with access to support systems to help them achieve this. This leads to dangerous consequences. It is estimated that 85% of people with an eating disorder find it difficult to access support. In Ireland, nearly 1800 new cases of eating disorders are diagnosed in people between the ages of 10-49 each year.

Last month Irish actress Nicola Coughlan, who broke into the mainstream with her role as Claire in Derry Girls,  as body shamed by a critic reviewing her performance in The Prime Of Miss Jean Brodie. Coughlan, like so many people, was doing her job. Her body was not relevant to the performance, it wasn't in the script. As Coughlan beautifully puts it in a piece she wrote for the Guardian:

At least I know I’m not alone. I’m following in the footsteps of some incredible actors, who dealt with similar comments throughout their entire careers. And I’m emboldened and inspired to come out and speak now, thanks to the work of the brilliant women in the Time’s Up movement. I hope in the future that more people will talk about our work, our inspirations, our drive, rather than our looks. A revolution is happening, and I want to play my part in it.

The next time you hate your body or wish you had the abs of a contestant from Love Island, remember you and I set that standard. Refuse to accept what you're being shown as your reality. Demand to see diversity.

If changing your body becomes your daily focus it's time to step back. Counting calories, constantly burning up a sweat, jumping on and off the scales does not help you. Celebrate what you love in your life, meet your friend for coffee, read your favourite book for the umpteenth time or listen to a throwback album and dance around your bedroom.

Don't shy away from the spotlight until you feel your body's ready. Don't stop yourself from going for that job, partner or trip because you think your size is off-putting. Life is a dance and you're the dancer. Love yourself and treat yourself with respect. I'll be taking that journey with you.

If you need to talk about body image or find out more visit bodywhys.ie.

Also Read: 9 Ways To Figure Out If You're Being Catfished Or Not