Is this Conor McGregor in hot water again? Surely not. This time around though, it could be a bit of a storm in a teacup after people online were unimpressed with Rita Ora's tweet of the pair at at last night's British Fashion Awards.

McGregor and Ora were guests of Donatella Versace in the Albert Hall and Ora posted a few photos of the pair, captioning it 'Date Night.' 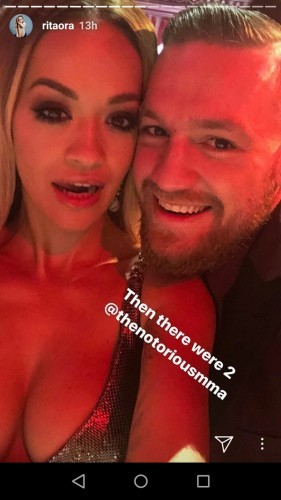 This of course set a lot of the Twitterati on edge, with many giving out about her being inconsiderate towards McGregor's girlfriend Dee Devlin.

Seriously disrespectful to his partner and mother of his child

This morning Ora tweeted again. This time a photo of herself and Donatella Versace, 'My real date.'

What the world should really be talking about is one of the other guests at Versace's table, beside McGregor and Ora last night. Can someone please tell me what the hell Lewis Hamilton is wearing!?

Life
By College Times Staff
Conor McGregor Announces Some Huge News...
Life
By CollegeTimes Video
Profile: John Kavanagh - The Godfather Of Irish MMA
Life
By Ian Smith
19 Irish Sports Stars You'd Love To Shift - Guys
Trending Now
Life
By CollegeTimes Staff
21 Irish Names That Are Never Spelt Or Pronounced Correctly
Travel
By Dafe Orugbo
Bucket List: 20 Things You Need To Do Before You Turn 20
Entertainment
By David Sweeney
30 Of The Hardest "Would You Rather" Questions Ever
Life
By David Sweeney
22 Embarrassing Moments We've All Experienced
About Us ● Advertise ● Privacy ● Contact Us Powered by Publisher Plus
Next Page »