Watch: This 11-Year Old Blanking Trump While Mowing His Lawn Is The Internet's Finest Hour

Martin Luther King had a dream that one day his children would be judged, not by the colour of their skin, but by the content of their character. Well some people aim a little bit lower than ol' MLK and more power to 'em.

One such person who's dialled down their dreaming ambitions from 'global equality' right thew way down to 'landscaping' is 11-year old Frank Giacco. Frank knows, that at least as an 11- year old fighting systemic discrimination may be beyond him, but he'll be damned if he's to be shown-up by some unruly grass. Frank had written to the White House asking if he could mow its fabled lawn, and the letter had been read by White House Press Secretary Sarah Huckabee Sanders, who helped bring about his wish. He offered his landscaping services free of charge so that he could "show the nation what young people like me are ready for".

What he did not appear at all ready for however was meeting Donald Trump on the grounds of the White House. When President Trump does amble over, Frank, who is mid-mow and clearly putting all his efforts into maintaining as straight a line as his gardening skills can muster, utterly ignores Donald Trump. Frank, lost to the world, consumed in his passion for manicuring lawns, glides by Donald, who sort of awkwardly lurks beside the boy, like a crazed man shambling around a bus stop, peppering him with inane comments. It all kicks off in the video from around the 1:20 mark when we see Trump set his sights on the boy.

Frank's father eventually intervenes and drags him away from the mower to acknowledge the president's existence. However the video does raise some key issues about Trump.

1) Seeing him in this context makes sense:

Trump is not a natural politician. The corridors of government seem to restrictive for a man like him. But now, we have finally discovered him in his natural habitat; aimlessly wandering around a garden trying to befriend strangers. Having seen the video we wonder whether Trump knew about this pre-arranged publicity stunt or if this is simply part of his daily routine, ambling around the grounds, tragically trying to befriend and make small talk with his various staff. He is essentially that man who will stand at the front of the bus chatting at a disinterested bus-driver, but on an international scale.

2) Trump's waistline is too high:

Let's just take a moment shall we? 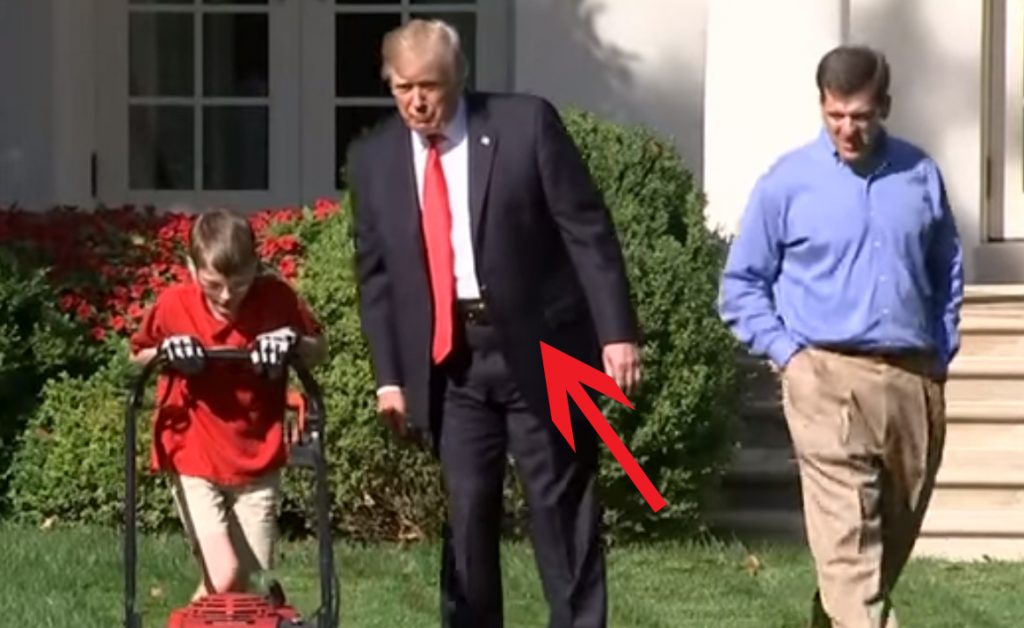 You don't need to be Gok Wan to be able to tell that the ratio of 'shirt' to 'trouser' in that ensemble is frankly risible. I'm not hear to judge the sartorial choices of a man in his 70's, but- well... that's exactly why I'm here. I think, as a rule of thumb, the waist of your trousers should never be above your belly-button, call me old-fashioned. The amount of crotch frontage on those suit pants is reminiscent of maternity wear. It's honestly astounding, and all other grievances with the man aside, he deserves widespread condemnation for this.

3) The above photo looks like a promo shot of a derelict boy-band:

Perhaps from some disastrous post-apocalyptic future where our options for commercially appealing men in the music industry has been utterly decimated. Yet, we humans are ever resourceful and rather than live in a world without the joy of boy bands, we simply cobble together one from an underage gardener, a man who probably brought about hypothetical post-apocalypse I'm describing and the presumed father of the gardener. What a trio.

Also Read: 21 Things You Could Do Today If You Absolutely Hate GAA