There were very strange scenes at the NME Awards last night where presenter and comedian Katherine Ryan found herself accosted on stage by rapper Slowthai.

In scenes widely circulated on social media this morning, Slowthai invaded Ryan's personal space on stage and issued the following bizarre pick-up line: “Baby girl … if you want to do something, see me later … you ain’t never had anyone play with you like I’ll play with you.”

There was an incident at #NMEAwards2020 last night. British Rapper Slowthai, invaded host Katherine Ryan's space on stage and began making lewd & misogynist comments. Slowthai then began fighting with the audience. The amazing @Kathbum handled it like a pro, seemingly unphased. x pic.twitter.com/TdeV0lDHWI

Slowthai, who was awarded with the Hero of the Year last night, then threw a pint glass at a member of the crowd who wasn't a fan of his behaviour from the stage.

#slowthai wins ‘Hero Of The Year’ having held up a severed head effigy of the Prime Minister on stage last year.

At the #NMEAwards last night he gets drunk, gropes Katherine Ryan on stage, and then starts a fight with the audience.

Hero may be a stretch pic.twitter.com/EfBDv62DZj

Tonight @slowthai tried to preach about equality for all, then attempted to assault a woman live on stage... and then when confronted by a member of the crowd, proceeded to throw a drink at them. That’s one way to peak and ruin your career all in one night. #NMEAwards2020

KSI, for whatever reason, didn't seem too troubled.

Ryan, for her part, remained amazingly calm through the whole thing. Obviously her experience in stand-up comedy gave her direct experience in dealing with hecklers, but this was next level. On Twitter afterwards, she said Slowthai didn't even phase her.

He didn’t make me uncomfortable.
This is why we need women in positions of power. I knew he had lost from the moment he opened his mouth like any heckler coming up against a COMIC - not a woman - a COMIC. I was operating 2/10. What a sweet boy. I defused it.
Tonight was fun! ❤️ https://t.co/BBMPZpIvhy

Many of the top UK-based comedians reached out to Ryan to commend her. 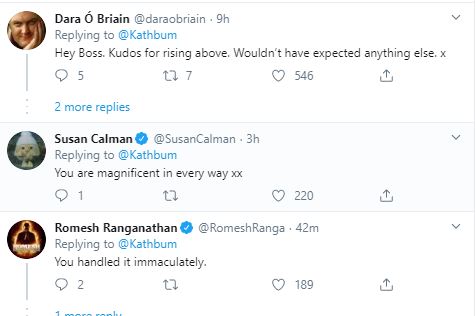