Us common folk love a celebrity baby name reveal but 9 times out of 10 it's the most ridiculous, random name that ever existed. Adding to the strange baby names trend once more are Ryan Reynolds and Blake Lively, who already have a daughter called James.

They might be #couplesgoals but Blake and Ryan have called their latest bundle of joy an interesting name. At first it sounds kinda cute but then you say it out loud.... Ines. That's pronounced "EE-nez" which you know, sounds like penis.

Fans have not been so kind in comments, especially on Buzzfeed: 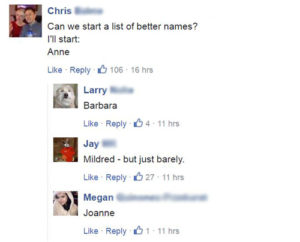 Others have been saying that the name is actually pronounced "EYE-nez" and it's a beautiful name. Either way, no one will probably bully little Ines when she goes to school with Apples and Norths.

What do you reckon? Is the name a bit too similar to two words it shouldn't? Or is it nice?

News
By CollegeTimes Staff
Students Receive Their Leaving Cert Results With High Inflation Expected Yet Again
News
By Hugh Carr
Report: €2.9 Billion To Be Invested In Third Level Education Over Next 5 Years
News
By CollegeTimes Staff
RSA Hoping To Move Theory Tests Online
Trending Now
Life
By CollegeTimes Staff
21 Irish Names That Are Never Spelt Or Pronounced Correctly
Travel
By Dafe Orugbo
Bucket List: 20 Things You Need To Do Before You Turn 20
Entertainment
By David Sweeney
30 Of The Hardest "Would You Rather" Questions Ever
Life
By David Sweeney
22 Embarrassing Moments We've All Experienced
About Us ● Advertise ● Privacy ● Contact Us Powered by Publisher Plus
Next Page »