The results of Friday's referendum can only be described as a seismic shift in Irish life. Irish women's reproductive rights are no longer ruled by a line in the constitution.

On Saturday, after the exit polls were announced Friday night, the public began to celebrate the women and men who tirelessly pushed for women's health care and bodily autonomy before and since the insertion of the Eighth Amendment into the constitution in 1983.

One figure who repeatedly spoke about the issue of the Eight on a personal level was comedian, author, and actress Tara Flynn. Tara publicly campaigned against the Eighth Amendment for over three years. 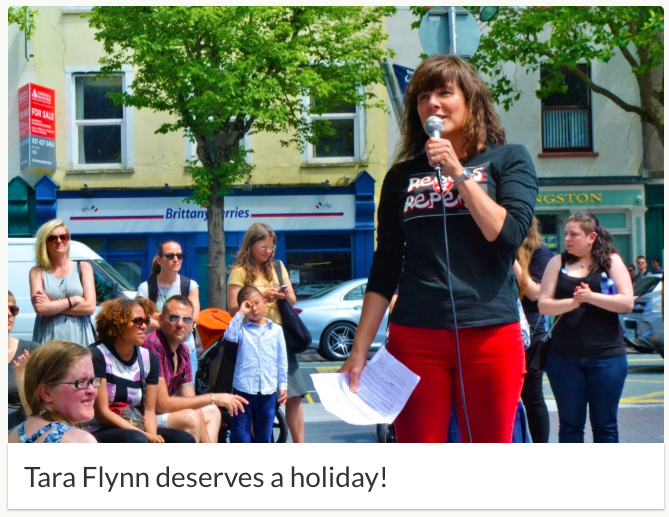 Ridiculed, mocked and trolled by campaigners and the public for seeking treatment in the UK, Flynn was forced time and time again to discuss her abortion in the hopes that Irish people would listen and act.

Now, Flynn is being given a well-deserved break or at least fans are trying to. A GoFund Me for Tara and created by SexSiopa raised over €7,000 euro in the space of 24 hours. The GoFundMe is now closed and people turned to Twitter to let Tara know how much her work has impacted their lives.

when this is all over, may tara flynn never pay for another drink in this country again

When the Minister for Health gives you a hug on the day that Ireland welcomes you home. pic.twitter.com/ITJCTJPNcK

Nice chat yesterday with a Dublin florist.
Me: Hi I’d like to send some flowers to a friend.
DF: well we are very busy. They might not go out til Mon or Tues.
Me: no worries. They’re for @TaraFlynn
DF : The Repeal the 8th @TaraFlynn?
Me: Yes.
DF: We’ll get them out today. ❤️

Tara Flynn deserves every penny of that fundraiser and fuck anyone that begrudges her that.
I know the woman and she has sacrificed more then you'll ever know.
She was this country's punching bag for 3 years. I don't know how anyone could take what she took and remain unbroken.

In true Irish fashion, Tara found it difficult to accept the money and playfully called the supporters "cracked":

I’ve just looked at that gofundme. I am conflicted. So grateful, really touched, but it’s too much. Ye are cracked. I love ye but ye are cracked ?❤️

In the end, Tara did not accept the money but asked for it to be donated to Profound Ireland, an organisation that acts as the voice for disabled children and their carers.

Please give it to @AddressingLife. Let’s make everyone happy and be able to sleep. They need it. Much love and thanks. Honestly. And that’s my last word on the matter.

Profound founder wishes Tara to keep the funds as the money was raised for her to go on a holiday. If ever there was a real-life Mrs. Doyle "no, I'll pay!" moment this is it.

Also Read: The 24 Most Memorable Moments Since The Eighth Amendment Debate Began

News
By Joe O'Gorman
Donegal Priest Hands Out Letters "From The Dead" About Election
News
By Grainne Sharkey
Woman Who Underwent Abortion Harassed After Patient Information Leaked
News
By Rory McNab
BREAKING: Abortion Bill Signed Into Law By The President
Previous Next

News
By Joe O'Gorman
Donegal Priest Hands Out Letters "From The Dead" About Election
News
By Grainne Sharkey
Woman Who Underwent Abortion Harassed After Patient Information Leaked
News
By Rory McNab
BREAKING: Abortion Bill Signed Into Law By The President
Trending Now
Life
By CollegeTimes Staff
Politically Correct Ways To Call Someone Stupid
Entertainment
By Tony Kelly
The Massive Plot Hole in The Shawshank Redemption That You've Never Noticed Before
41