I don't think we've ever been so excited to see a politician visit Ireland. It's just been announced in the Dáil this afternoon that the coolest Prime Minister in the world, Justin Trudeau, will be visiting Ireland in July.

It's just been announced in the Dáil this afternoon that the coolest Prime Minister in the world, Justin Trudeau, will be visiting Ireland in July.

He's expected to be making his way to the Emerald Isle around July 4th and will be visiting Leo and family. Our own Leo has said that he very much admired Trudeau and his policies and compared himself to both Trudeau and French President Emmanuel Macron.

So what has Trudeau even done, eh? Well, he created the first 50:50 gender-balanced cabinet as well as introducing a bill to legalise marijuana. He's also been known as possibly the most handsome man in politics but that's secondary really (ahem).

Trudeau is the head of the Liberal party in Canada and shot the party to popularity back in 2013. He catapulted his party from 36 seats to 184 seats, making them the largest political party in Canada. If that wasn't enough, his party also received the largest increase in seats compared to any other party in an election in Canadian history.

In honour of Trudeau's visit to the Emerald Isle, we've rounded up all the reasons Irish people love him.

2. He shook a little girl who was dressed as Wonder Woman's hand at Pride, wearing rainbow socks

3. He photobombed a group of Canadian student's prom photo and looked beautiful while doing so

These Teens Got the Ultimate Prom Photobomb Thanks To Justin Trudeau https://t.co/CfxFxuyfFP pic.twitter.com/rWA0Se32Bj

5. He built a pillow fort with a young girl and made us weep

6. He went to the airport to greet Syrian refugees and even gave them winter coats

7. He flirted with the Queen of England

On the contrary, you are forever young. I was honoured to toast your lifetime of service tonight. https://t.co/xcXGiSj6OT

8. He got away with balancing a baby with one hand

Justin Trudeau says the budget is just as easy to balance as this baby in his one had? #topoli #cdnpoli #topoli pic.twitter.com/tkIVEGW3Nd

9. His face, just look at his beautiful face 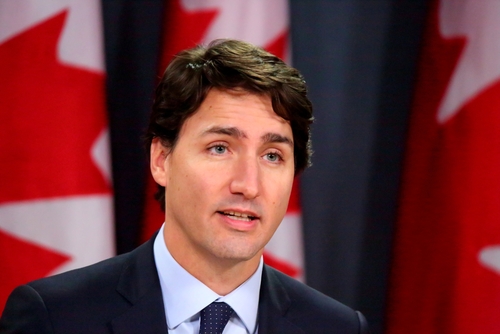