New Survey Reveals The Tidiest And Dirtiest Towns In Ireland

Business group Irish Businesses Against Litter (IBAL) has today released a survey which indicates that there has been a country wide improvement in cleanliness. The report finds that over 90% of rural towns surveyed were deemed clean & 16 out of 40 towns were 'cleaner than European norms'.

Tullamore has been judged to be the tidiest town of those surveyed, while Galvone in Limerick city was regarded as the most littered location on the list.

Conor Horgan of IBAL says a lack of community involvement explains why certain disadvantaged urban areas continue to be plagued by litter despite improvements elsewhere:

We haven’t seen as much improvement in these social housing areas, where communities are often transient, social neglect is evident, and community groups and tidy towns committees are lacking compared to in mixed communities. Without these volunteer forces supporting the efforts of the council, these areas will simply not be clean on a sustained basis.

Horgan also warned of the effects of littering on our beaches as well as highlighting the increase in illegal dumping:

“Be it in cities or in towns, we enjoy a much cleaner environment than 15 years ago, but litter has not gone away,“ warns Conor Horgan. “This summer we again had examples of extreme littering on beaches for examples, which display a worrying indifference to the natural environment. Marine litter is a source of great concern at present and an issue IBAL may concentrate more on in the future.” “Also, dumping is on the increase, and the more we ask people to pay for waste disposal the greater an issue it is likely to become. It may not be as widespread, but dumping is the new litter in many respects.”

Despite some concerns found in the report, overall, Horgan was pleased with the groups findings;

In the 16 years we have been conducting these surveys, this is possibly our best result. Across the board we have seen improvements. The news is all the more positive given the importance of how we present our country over the summer months, when we attract over 40% of our visitors. Also satisfying is the pristine state of the roads around Dublin Airport, which help form a first impression for many of these visitors.

Here is a ranking of all of the towns surveyed: 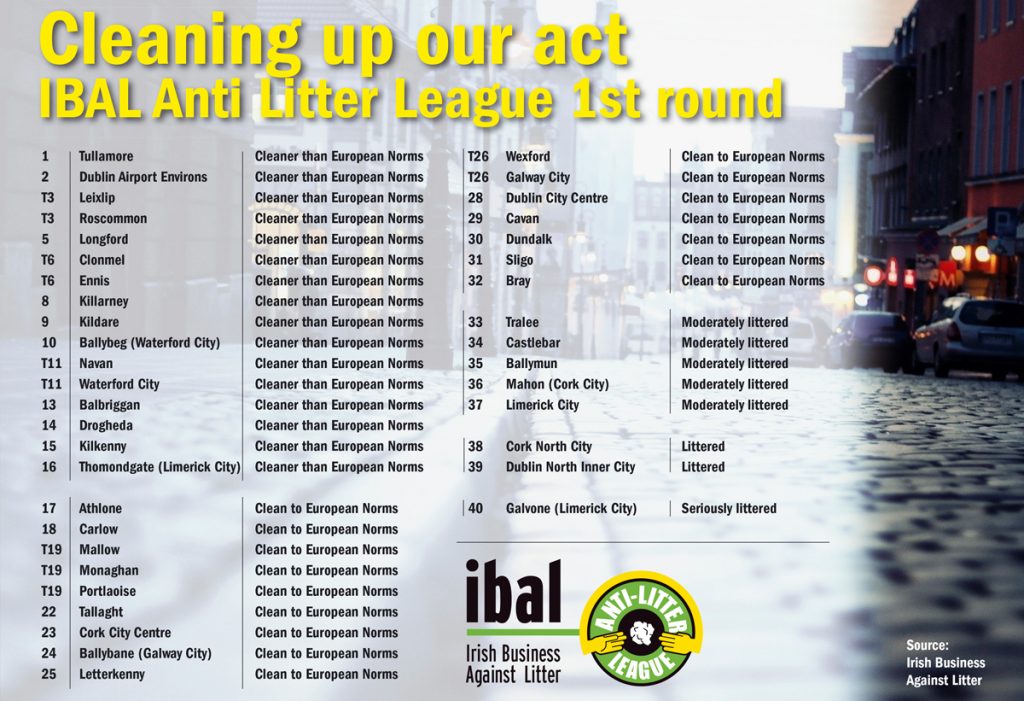 See Also: Over 250,000 Glitter Cases Were Recalled After They Caused Serious Skin Burns