Can you think of an Irish TV couple who are as brilliant as John and Mary from Father Ted?

The O'Learys provided us with endless entertainment and gas one liners and we actually can't imagine the show without them. Here's why John and Mary are so typically...Irish.

1. All out to impress

In the episode Cigarettes and Alcohol and Rollerblading, John and Mary visit Father Ted with chocolate and accuse each other of showing off in front of the priest. It's not long before the insults start flying.

"Oh, Father, you're brilliant. Father, you should be Pope. It doesn't impress him. Makes me sick," says Mary to John, before taking the egg for herself. 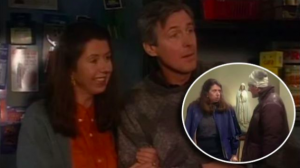 2. John doesn't let a serious head injury get in the way of making small talk

Irish people are nothing if not polite! Doesn't matter how much of a rush we're in or how much our health is at risk, there's no excuse for not exchanging pleasantries with the local priests.

In the middle of an almighty row in A & E (John to Mary,"You started it you little slag), the couple bump into Ted and Dougal. Mary's on crutches and John's head looks like it's about to fall off but he's as cheery as can be.

"Ah's nothing father, it's just a headache."

3. Not your typical cheesy RomCom couple

The O'Learys ran at busy shop at the heart of community - they didn't have time to whisper sweet nothings or snuggle up and watch Netflix.

Sure how would Ted have gotten his copy of The Craggy Island Examiner if the couple were busy staring into each other's eyes at every waking moment?

4. They had their rows in private

Mary may have threatened to stick a knife up John's arse and drown him, John possibly called her every name under the sun from a slag to a fat 'oul bitch but that doesn't mean they didn't love each other.

Like every couple, they had their arguments but when someone came into the shop, there was no two more united than John and Mary. "You big pile of shite..."

5. Respectful of the clergy

The loveable couple had the upmost respect for their local priests.

From exchanging pleasantries to providing everything from handcuffs and firelighters, the O'Learys had a permanent smile on their faces whenever they bumped into Dougal and Ted.

John: "Well at least that's one set between the two of us." 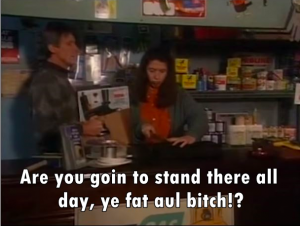 Also Read: Why Friends Haters Need To Give The Show A ("We Were On A!!") Break