Why Friends Haters Need To Give The Show A ("We Were On A!!") Break

During its ten year reign on TV, Friends could do no wrong.

The world fell in love with the show back in 1994 when it first aired and, apart from the odd storyline lapse (cough, Rachel and Joey) and the endless rehash of 'WE WERE ON A BREAK,' viewers' fondness for the sitcom resonated throughout and long after it wrapped up.

To be fair, given the constant reruns, it's not like it ever really left our screens but the point is, it never fell under any major criticism.

Fast forward to 2018 and boom! Fat Monica scenes are not funny, they're cruel. Ross taking issue with a male nanny equals sexism. The lesbian jokes about Carol and Susan and jibes about Chandler's sexuality are homophobic. 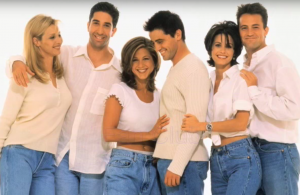 The show has also been criticised for its lack of diversity - during its time, only two non-white characters came to the forefront - Julie and Charlie, who were Ross' girlfriends in season two and season nine respectively.

You know what I hate?

In Friends, not only do they talk about Monica like she's ridiculously huge WHEN SHES NOT, but her personality is completely different when she's fat. As if being thin somehow makes her a more well rounded person.

In adding the comedy to their collection over the New Year, Netflix has, unwittingly, sparked a debate around some of its material. That's not to say the whole 'Friends isn't PC' argument hasn't been made before, because it has.

But now a new generation of viewers are watching under a modern lens and suddenly, social media is screaming about how offensive it is.

I’ve always had a really difficult time watching Friends, predominantly because of Ross’s pretty intense homophobia towards his ex wife and her new, lesbian partner.

Is it outdated? Yes, in many respects. If it were made today, the 'Haha Chandler might be gay' and 'Ross, your ex-wife is a lesbian' sort of lines - let alone the extensive fat-shaming of young Monica - wouldn't even have made the cutting room floor.

But it's a 90s baby, a product of its time, first made nearly a quarter of a century ago. Society has moved on, attitudes have progressed.

Isn't it a positive thing that we take issue with some of the show's material when we watch it now? Doesn't it indicate that we're much more tolerant and aware of how we broach certain issues?

If you take it at face value and apply modern day sensibilities to it and look at it as someone who went out to make it in 2018, you would be shocked.

We have to be grown up about this, we have to look at perspective and look at the context in which it was made.

It's fine to say it's uncomfortable by today's standards but if you're not careful you look at the world from an insular, narrow perspective.

Those who say that it was even regressive back then for a mainstream show to include jokes about sexuality, can be disputed by the three nominations and one win it took home for outstanding comedy series at the GLAAD Media Awards.

Not to mention 'The One with the Lesbian Wedding' in 1996 - at the time networks bosses predicted a huge backlash and the ahead of its time episode was even banned from airing in two cities. 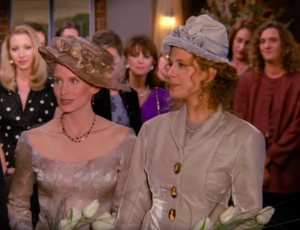 Chandler's treatment of his transgender father is also heavily criticised, but as The Washington Post wrote:

...his dad is referred to as gay and a drag queen, but never transgender (this was the ’90s, after all). Today, it is a bit jarring to see Chandler greet Turner in full makeup and a dress with a sardonic “Hi . . . Dad,” followed by a laugh track.

But Chandler’s acceptance of his dad becomes a growth experience, and the show deals more with the breakup of his parents’ marriage than his father’s sexuality.

In regards to the all-white cast, the TV landscape has evolved over the last two decades. Shows are making much more of an effort to cast characters from ethnic minorities. 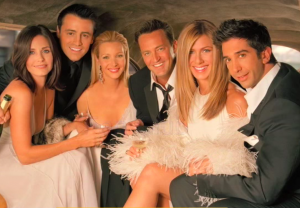 Take Shonda Rhimes, who has been championed for casting actors that reflect a diverse demographic, in shows like Greys Anatomy and Scandal. Or Netflix's, Master of None which cast Asian American, Kelvin Hu, in the main role of the hunk, which falls outside the realms of conventional TV.

Martha Kauffman, one of the masterminds behind Friends has previously addressed the 'lack of diversity' criticism, saying they found the "six best actors for the material."

When we cast the show, we didn’t say to ourselves, ‘This is going to be an all-white cast.'

And the Fat Monica jibes? Her weight may be the butt of jokes but in a season six episode, we're shown an alternate universe where Monica is still fat and she still ends up in a relationship with Chandler who ultimately doesn't care about her weight.

When we sit down to watch the show, we have to be smart enough to realise that it was a different time - I mean, are any of us rushing out to replicate the 'Rachel cut' that people were falling over themselves to get back in '95? Hopefully not! Because it has aged, much like some of the jibes. 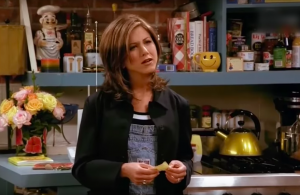 "If you mean it's ahead of its time...," as a teacher says, referencing the feminism theme of Jane Eyre to a clueless Rachel in season five, who having not read the book, is told by Phoebe that Jane is a cyborg. Rachel replies: "Yes, but also...the Robots."

Those sort of comedy quips are timeless.

Also Read: 5 Reasons Why You Need To Watch Derry Girls