Love Island Has Become Too Dramatic, I Can't Go On

I am but a humble man. I have few requests of this world, and those I do have are modest. I am but a man of simple pleasures, and one of those pleasures just so happens to be the daily viewing of an hour long highlights reel of fourteen singletons trying to competitively fuck their way to a cash prize of 50 thousand pounds. Or at least it used to be a pleasure. What was once an emotional crutch - a delightful mind-numbing hour of televised ointment to soothe the scars of a stressful day - has now become a cross to bear. Last night's episode was simply too harrowing.

There have been signs that this turnaround was imminent. There was a brief period, in the early part of this week where the show seemed in danger of descending into just being a sun holiday for seven quite settled couples, and we, the viewers, were to become creepy voyeurs of this rather placid spectacle. Thankfully, Alex put an end to that. Alex took that fleeting spell of harmony round the back of the villa and bludgeoned it to death with a large baton made of his new-found paranoia and proto-incel resentment. After the demise of his and Ellie's 'relationship', which she took for what it was - an unfortunate dissipating of feelings after a kiss on a single date - and which he took as if it were the disintegration of a 15 year marriage, relationships everywhere began to crumble. Eyal and Megan's fundamental incompatibility came to the fore, capsizing their couple before Megan's new found interest in Wes, a man who looks like he's cos-playing Jermaine Jenas, put an end to him and Laura - previously seen as one of the house's strongest couples.

Chernobyl would doff its cap to the sheer scale of the fallout caused by Wes' jumping ship from the sympathetic Laura to Megan. Wes and Megan's decision to spend their first night together in one of the weird outdoor beds that are scattered throughout the complex was an act of diplomatic suicide. The moment they shuffled past all of the other housemates beds constituted perhaps the most embarrassing bedroom walk-out conceivable for a anyone who hasn't just soiled themselves. The entire next day was spent negotiating the ill-will  other housemates that was engendered by this move.

Megan dealt with it by playing with her hair in a way that seemed vaguely more plaintive than usual. Wes, once-dear and beloved, dealt with the tension primarily in two ways; firstly, by flitting from group to group, attempting to put out the fires he'd started - while still holding the smouldering match - and secondly, by chain-eating ice-pops with a look of powerful sorrow on his face. 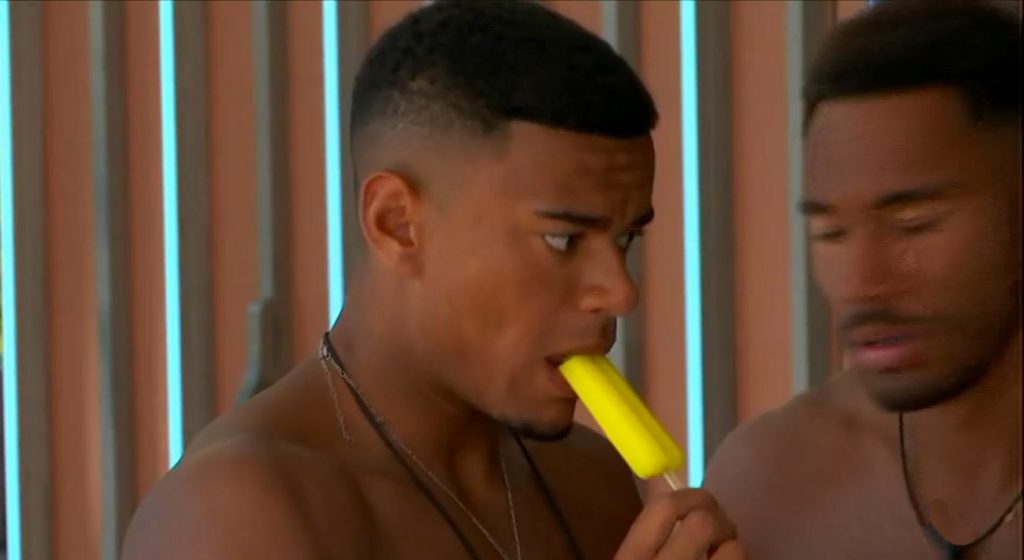 Look at him. Look at the contrast. Look at the glistening orange ice-pop, a perennial symbol of jocular summer fun, now look at Wes, look into his eyes. The sadness of man, all the tragedy of mankind through the ages is writ large on Wes' face. He looks like someone who has, right then, in that one moment, lips chilled by the delicate touch of frigid sugar and e-numbers, been struck by the consequences of his actions. It has all the nuance of a Renaissance painting; we see regret, sorrow, pain, and, most of all, like all self-respecting Renaissance paintings, we see a large orange ice-pop.

Is this a normal reaction to stress? There have definitely been points in previous shows where we've been treated to cut-away shots of Wes hoovering down ice-pops with a gluttonous verve reminiscent of a sugar-lusting schoolboy on a Channel 4 documentary about the worrying rise in childhood obesity. It seems to be Wes' coping mechanism.

Well, given the events that transpired toward the end of the episode, it can only be assumed that he devoured approximately 37 more ice-pops to deal with the sheer blood-curdling trauma of the show's finale.

As night drew in on the villa, Caroline Flack, made a surprising entrance. The contestants cooed in awed shock at the arrival of Flack. They evidently, and naturally enough, regard her as a sort of grim reaper.  They know that she is the one who will inform them of their fate; that she will decide at what stage they will leave the villa. Know that she will decide whether they will remain in the show long enough to build up sufficient notoriety so that they may secure a lucrative marketing deal with a high-end brand of protein powder upon their exit, or whether they will leave early, and be cast back into relative obscurity, and only secure a less lucrative deal with a brand of protein powder only purchasable online as it fails to meet the food safety standards of most Western nations. The contestants fear Caroline Flack, they fear her and the terrible power she wields.

After the results of the public vote were revealed, and the four most popular couples' safety was assured, Flack then informed the contestants that they would decide among themselves which two people - one boy and one girl - would be leaving the villa that evening. The girls who'd secured their safety were tasked with choosing the boy to leave and vice versa for the remaining boys. Placing this much responsibility on the incredibly sun-burnt shoulders of each group was simply too much to bear and after much pained deliberation, they eventually made their decisions with the shedding of an abundance of tears from their no doubt already dangerously fluid-deprived bodies. In customary reality TV style, there was a needlessly protracted build up and ornate series of dramatic pauses before it was revealed that Eyal and Zara would be leaving the villa.

Eyal, poor gentle Eyal. The face and body of a Grecian god, the mind of a child, a quite thick child. After being dumped by Megan, and having the customary one day period of mourning, he was gunning hard for Ellie. It was perhaps surprising that the girls chose to save Alex and Adam, given that they all deplore Adam's actions and Alex has essentially been reduced to being a kind of scorched-red eunuch ambling around the perimeter of their tragedy compound.

On top of all this they trailed, at the end of the episode, that a whole new villa will open up with 12 more contestants. This is too much. There has been too much drama, it is simply too much for one simple man to take. I have been left, a withered broken shell, trying to keep apace with the rapid changes, but always one step behind. Each new twist and turn is a terrible body blow which compounds the daily anguish. The searing drama burns. I want to stop watching, I need to stop watching, but I can't. I am in its thrall.

Also Read: Twitter Is Reacting To Last Night's Love Island In The Shadiest Of Ways

Entertainment
By Joe O'Gorman
New True Crime Drama Is Based On One Of The Most Controversial Cases Ever
Entertainment
By Grainne Sharkey
What's Coming Up On Love Island: Megan Goes For Wes And Laura Isn't Too Happy
Entertainment
By Niamh Burke
Shayne Ward Warns 'Upsetting' Scenes As Corrie Wedding Revenge Erupts In Classic Catfight
Previous Next

Entertainment
By Joe O'Gorman
New True Crime Drama Is Based On One Of The Most Controversial Cases Ever
Entertainment
By Grainne Sharkey
What's Coming Up On Love Island: Megan Goes For Wes And Laura Isn't Too Happy
Entertainment
By Niamh Burke
Shayne Ward Warns 'Upsetting' Scenes As Corrie Wedding Revenge Erupts In Classic Catfight
Trending Now
Uncategorized
By Kenneth Fox
Signs That You're A Complete Asshole
Life 101
By CollegeTimes Staff
31 Easy Ways To Annoy Your Boyfriend...
41