The people you meet, the things you say and the stuff you do when you're drunk at a bar are often forgotten by the time your head hits the pillow that night. But there are a tonne of moronic and embarrassing acts that are committed in bars on a nightly basis, and the bartenders are the ones who see and remember it all, through clear and sober eyes.

Here are the 11 things bartenders notice that you didn't realise.

11. The DJ will not play The Spice Girls for you and your girlfriends.

How many girls have rushed the DJ to clog up the dancefloor and begged him to play "Spice Up Your Life?" The answer: infinite. And he'll almost always reject your demands, or simply smile and nod to get rid of you, then blast out some Afrojack instead.

10. Almost NOBODY dances in a bar when they're sober.

Bars are simply for sitting and drinking up until 11pm, when the DJ has been playing for an hour. By this time, the alcohol starts to kick in, luring patrons up out of their chairs and onto the dancefloor, where they'll dance like there's nobody watching. But there is. The worst is when a customer jiggles upto the bar shaking his hips while ordering a cocktail. Definitely wouldn't be moving like that sober!

9. Everybody's standards take a nosedive after 2am.

It's a mathematical law: Alcohol + Time = Serious Drop in Standards. It's been like this from the beginning of time and it's certainly not going to change now. Just ask the guy trying to shift the girl, who could be mistaken for a large wardrobe, into a taxi at 3am. Hard luck fella, that'll hurt in the morning.

8. Surprisingly, it's not always possible to lip-read your order from across the bar.

People who try and jump the bar queue AND mouth their drink order from over 15 feet away are just the worst. And don't be alarmed when your bartender can't understand a word you're trying to say.

7. There's always one couple inappropriately groping each other.

There's one at every bar. They arrive, sit on the bar stools and chat away and that's fine. But somewhere after their third drunk, both get a little tipsy and a LOT handsy. Before long, they're swapping saliva but hopefully they won't swap any other bodily fluids on the premises, but this does happen...

6. There's no chance of you scoring your bartender when you're drunk.

You may be full of confidence and find your bartender easier to talk to then anyone else around, but remember: the bartender has not been drinking for 4 hours and absolutely does not find your drunken attempt at flirting through slurred words in any way appealing. They'll just be nice to you because it's their job, and maybe slide you a glass of water and a napkin to wipe that drool off your face...

5. People are SO much more polite when they're on dates.

Especially on first dates, guys and girls always set out to make the best possible impression. Please, thank you and cheers are all thrown into the first date's vocabulary but when their date goes to the bathroom, how much of a douchebag that person really is presents itself.

4. Rich guys love to flaunt their cash in front of friends.

There are real life Patrick Batemans who exist out there - yuppy types who love to show off their wealth and feigned extravagance in front of their friends and co-workers.

3. Customers who whistle, wave their cash around or tap on the bar will be last to get served.

These are the most irritating people you will ever come across at a bar. Just don't be one of them. Ever wonder why you're one of the last people to get served? This is probably the reason why. 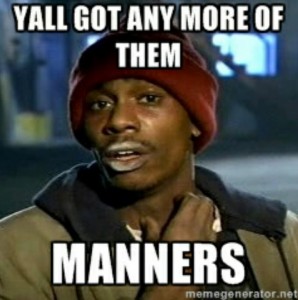 2. Everyone likes to ignore the lights coming on and the DJ stopping playing.

Nobody wants to leave the bar when they're having such a good time, but, unfortunately for you, the staff need to go home. "Come on, let's go folks" echoes around every bar at closing time. Don't be the guy nursing 3 pints of Fosters to himself 5 minutes before closing time.

1. Alcohol really does make you do stuff you wouldn't usually do.

Naturally, bartenders will have more than a few stories to tell from working in the industry. People do stupid shit when they're drunk. Like the guy who walks around caressing and sniffing girls' hair before running away, or the girl who falls asleep on the toilet only to be found at 5am, or the guy who removes all his clothing during a sensual dance routine to Ricky Martin's "Livin' La Vida Loca" and can't find them again. Yes, being a bartender is a funny old job to have.