If your domicile was ablaze and you could only rescue one thing, due to a combination of the ferocity of the flames and your own reduced mobility having eaten a rather sizeable lunch, what would it be? Personally, after some careful consideration I know what I would choose to salvage from the raging inferno. I would barrell through the doors of my house, in a manner that I will describe as 'gracefully cinematic', before haring down the hall toward my goal. Using one arm to raise my jacket to try shield my face from the worst of the flames and smoke - like a vampire-wearing denim, I would forage through the crumbling house, searching for my target.

Having retrieved it I make to hot-foot out of the rapidly disintegrating edifice that was my home - pausing only to briefly explain to my parents, trapped in an adjacent room by a fallen roof-beam, that, seeing as there are two of them and I could only choose one thing to save, I thought it would be fairest to instead pick the bronze medal I'd won at an u11 long-jumping event. Before I could hear their thoughts on this decision, I would already be making my way toward the front-door, toward salvation, the bronze medal bobbing up and down on my chest.

That's just me though. According to the results of a recent study, were most people to be asked a similar question they - above friends, or members of their family, or even above the bittersweet mementos of a once-promising youth athlete - would choose a dog.

While this was not the exact wording of things, it certainly seems to be intimated by the results.

A medical research charity in the UK, named Harrison's Fund, staged a test to see whether people would be more likely to donate to their charity from an ad featuring an image of an ill child, or of a generic internet image of a dog.

Harrison's Fund is a charity which was set up to help raise funds for research into Duchenne muscular dystrophy, a genetic disease which typically leaves sufferers wheelchair bound by the age of 12. The charity was set up by the parents of a child, Harrison, whose son, suffers from this rare condition. They ran the campaign to see whether people were more sympathetic toward the idea of a child suffering or a dog.

They ran two concurrent campaigns. In each campaign, Harrison and the dog were both simply referred to as 'Harrison'. Each campaign was titled with the same plea, "Would you give 5 pounds to save Harrison from a slow, painful death?" 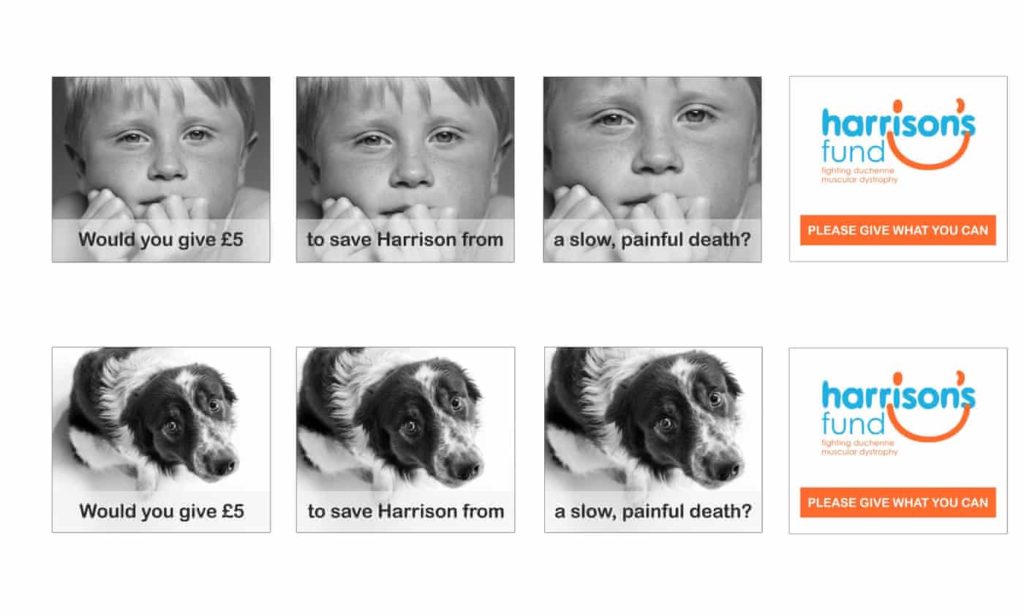 Apparently, people were far more reluctant to let a dog named Harrison succumb to a slow painful death than an actual human child.

The above ad led anyone who clicked on it to the Harrison's Fund website, but, at the end of the experiment, they would see which set of images - those of Harrison or those of the dog - received the most click-throughs. Despairingly, it seems that twice as many people clicked through the image of the dog than that of their son.

This is, undoubtedly, a somewhat depressing result showing people's readiness to fawningly care more about the plight of animals than people.

Should you wish to donate to Harrison's fund, click here.

Life
By College Times Staff
Lena Dunham Has Released A New Book For Charity...
Life
By Shane Johnston
Celebs Sing For Teenage Musician Who Died Of Bone Cancer
Life
By Julia O' Mahony
6 Useful Excuses to Give to the Chuggers
Previous Next

Life
By College Times Staff
Lena Dunham Has Released A New Book For Charity...
Life
By Shane Johnston
Celebs Sing For Teenage Musician Who Died Of Bone Cancer
Life
By Julia O' Mahony
6 Useful Excuses to Give to the Chuggers
Trending Now
Uncategorized
By CollegeTimes Staff
What The Tinder Panic Button Will Mean For You
1