Our Student Of The Week Can Turn Your Tears Into Electricity

It's rare any of us can say we've achieved something that hasn't been done before. But Aimee Stapleton can. The University of Limerick researcher, who didn't like science until transition year, has discovered how to generate electricity from tears.

We chat to Aimee about the project, what life is like as a researcher and any advice she has for budding young scientists. 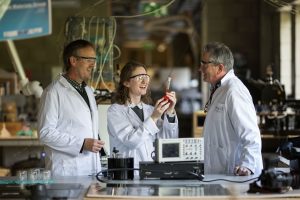 How does it feel for you to achieve something so revolutionary?

Myself and the rest of the team have been working on this project for a long time – over 4 years – so it feels great to get our research out into the world. The hope now is that others will build on what we have done and hopefully use protein piezoelectricity for technical applications.

What was an average day like for you as lead researcher on this project?

Your days are varied. Some days I would spend solely in the lab, other days I might be teaching or mentoring students. While parts of the job involve individual work, many parts of it involved team-work too - which was certainly true for this project. Another part of the job that often people don't expect is that it involves a lot of communication. Scientists regularly travel to conferences, speaking about and sharing their research. I also enjoyed visiting school to promote science as a career option.

What challenges have you faced along the way?

Research is challenging. You are trying to find out something new about the world – or look at a problem in a completely new way. This is the nature of research and as such you are faced with challenges – and often failure – on  a regular basis. However, I do believe embarking on a research career teaches you to be resilient and self-motivated.

Has it always been a dream of yours to become a scientist?

I had no plans to be a scientist growing up! I didn't even like science until I was in Transition Year. That was a turning point for me when I realized physics could be fascinating. I love problem-solving, logic and creativity - studying physics allowed me to dig deep in to all of these.

Any advice for budding young scientists?

Sometimes people have misconceptions about who can become a scientist. The image of an Einstein-lookalike often comes to mind. But in reality, scientists are just regular people. If you are enthusiastic about your subject, motivated and have questions you want answered - you will make a great scientist

What's the ultimate goal for you? Where do you see yourself in five years time?

I completed my PhD recently and have started a new position promoting science to our public. Over the next five years, I'd love to see our work making a real impact on society. Science effects all of our lives but too often, the public feel that science is not communicated in an accessible way - we're trying to change that.

Also Read: Our Student Of The Week Has Achieved Something Unprecedented Amongst Travellers

researcher science student of the week