Dear Person Who Is Planning To Dress As Donald Trump This Weekend,

Hi! And congratulations on choosing a thought-provoking, technically ambitious and highly topical costume for your party and/or night out this coming weekend.

With the US Presidential Election just around the corner, and with Trump heading for an absolute meltdown according to the latest polls, you truly are capturing a moment in time – one that will be remembered via photos in the future, accompanied by "Oh my GOD, remember that Trump guy?!".

And what's more, it's quite a technically achievable one (despite our misgivings, we'll be providing a how-to guide for those still insistent on carrying out the act – watch this space), as well as being hella scary.

So all in all, it's basically a perfect storm of Halloweeny goodness.

So what's the problem?

You will literally be one of eight billion people – literally – doing the EXACT SAME THING.

All of the factors that make it the perfect costume also make it the most damn predictable thing anyone's ever done since Donny himself repeatedly yelled "WRONG" at Hillary during the last debate.

Every year has one costume that dominates proceedings, be it Amy Winehouse in 2011, Walter White in 2013 or – in a similar vein – Sarah Palin in 2008. Most of the time, we don't really know what that's going to be in advance of the weekend itself.

But this time, we do. We really, really do.

And while clowns, Harley Quinn and Harambe will give The Donald a good run for his (questionable) money, there's no doubting that the Sour Satsuma is going to reign supreme this year... in the costume stakes, at least.

So don't be one of billions. Don't get lost in the crowd. Don't succumb to the yellow fever that's going to sweep the ranks of the unimaginative. Don't enshrine the cretin's place in history, via the medium of Facebook photos, and don't be an Insta-cliché, or a Snapchat samey.

I mean, just LOOK at Google searches for 'Donald Trump costume' over the last six months... 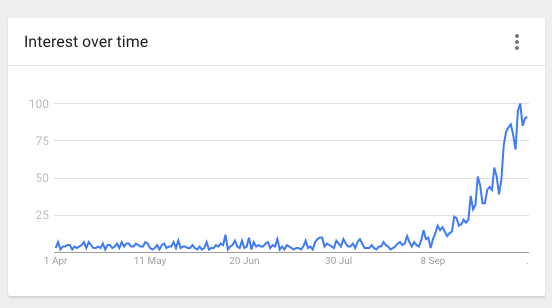 (Side note: who was searching this in April?!)

So as we can see, it's not going to be enough to just lash on a bit of orange, an ill-fitting suit and a wig.

You're going to need to think outside the box. Get creative. Get crazy. Break the everlasting cycle of dominant costumes, year after year after year.

And most importantly of all, you have the power to MAKE HALLOWEEN GREAT AGAIN.