The Oxford English Dictionary defines 'eating' as "Putting (food) into the mouth and chewing and swallowing it", I would define eating as "That thing you do to a kebab that inevitably results in a great deal of regret, self-loathing and intestinal discomfort'. Like it or loathe it however, until scientists pull their fingers out and invent some kind of nutrient-rich daily pill that tends to all our dietary needs, we're stuck with eating. For the busy student; conjuring up plausible excuses as to why they've missed their most recent tutorials; studying; avoiding studying, and consuming and sharing memes relating to the stresses brought on by avoiding studying, finding time to prepare food each day can be a struggle. Thus, the existence of the large batch cook.

Doing large batch cooks of a single meal, designed to last you for several days, is the easiest way to minimise the time you spend cooking while maximising both the amount of food you make and the feeling that you're working in a prison kitchen. Students since the dawn of time have been doing batch cooks*, however eating one meal repetitively can quickly become very tedious. Typically, by about the third day, the sight of the vast, seemingly bottomless vat, of soggy pasta that sits in your fridge can bring about despair. Indeed, forcing yourself to eat the same meal every day, that quickly lost any of its original taste or joy, it could be argued, is a form of self-inflicted Chinese water torture. So, to avoid accidentally committing a war crime against yourself, we've decided to start a weekly series where we provide you with recipes to make delicious and simple large batch meals that are not just pasta and a jar of sauce. What's more, the ingredients for each recipe won't cost more than €5 and will provide you with at least five portions.

This week, I'm going to be holding your hand** through the process of making a:

Dahls are incredibly simple curries which require only a few ingredients to make massive amounts of what I will, with the best of intentions, call 'fantastically tasty sludge'.

The main ingredients you will need, coming to €4.87, are:

For the rest of the ingredients I'm going to be making an assumption about you. Right off the bat I'm guessing you, like all self-respecting students are in possession of, or have access to, an impressively well-stocked spice-rack. When I was in college, I can't count the number of people I knew who, as soon as their monthly student grant came through, would be tearing off down to their local spice-market/bazaar to blow all of their state-granted windfall in a frenzy of spice acquisition.

Once you have amassed your ingredients, the time we have all been waiting for has arrived, it's time to make a dahl.

1) If this were a seedy 1960s Playboy photoshoot, this would be the time where I would yell "Oil up people!" Thankfully for all involved, it's not. But it is still time to oil up people. Put the oil in a large pot on a medium heat.

2) It is now a race against the clock, like an episode of 24, except - instead of diffusing a dirty bomb before it detonates and destroys San Diego - you've to dice the two onions and garlic, then cut the butternut squash into 2cm chunks, having peeled it and removed the seeds. Once you've seen to these unruly characters, your oil should be positively H.O.T. Throw the onions and garlic in, fry them for 5 minutes, before introducing the butternut squash into this melange. Then, like a long-married couple who've grown tired of their customary, increasingly tedious intimacy, it's time to spice things up! Add the spices, every man jack of them.

3) Let this shower of absolute so-and-sos do their thing (cook) for a few more minutes before adding in your can of tomatoes and the 1.2l of stock. Allow this whole combo to gently simmer for around 10 minutes, then comes the moment we've all been waiting for; it's lentil time!

4) Wash 300g of lentils and add them into the concoction with the tablespoon of mango chutney and, get mixing. This is where you begin to take a back seat in the process. Pop a lid on your pot, and let the heat transform the lentils from hard pellets, into a sort of delicious red sludge. This will take some 20-30 minutes, though you can leave it on a low heat for a long time, once you de-lid your pot occasionally for a stir and to make sure it doesn't dry out.

5) Boil the rice according to the instructions on the packet. What am I, one of your parents? I'm not gonna do everything for ya here.

6) Put the delicious dahl with rice into your mouth. Chew. Swallow. Repeat 'til sated.

The dahl itself will keep for about 5 days in the fridge, enough to keep you in lunches/ dinners for the week. If you are using boil in the bag rice, for whatever insane reason one of the individual bags of rice always seems to contain slightly too much rice for one portion, but never enough to split into two portions. The genius workaround here is to make two bags and that will provide you with three portions of rice, which you can save for subsequent meals. If you aren't using boil in the bag rice, then I can only apologise for so thoroughly wasting your time by forcing you to read the last sentence.

To reward us all for making it through this, and for making a dahl, here's a photoshopped image of Adele's face in lentils. 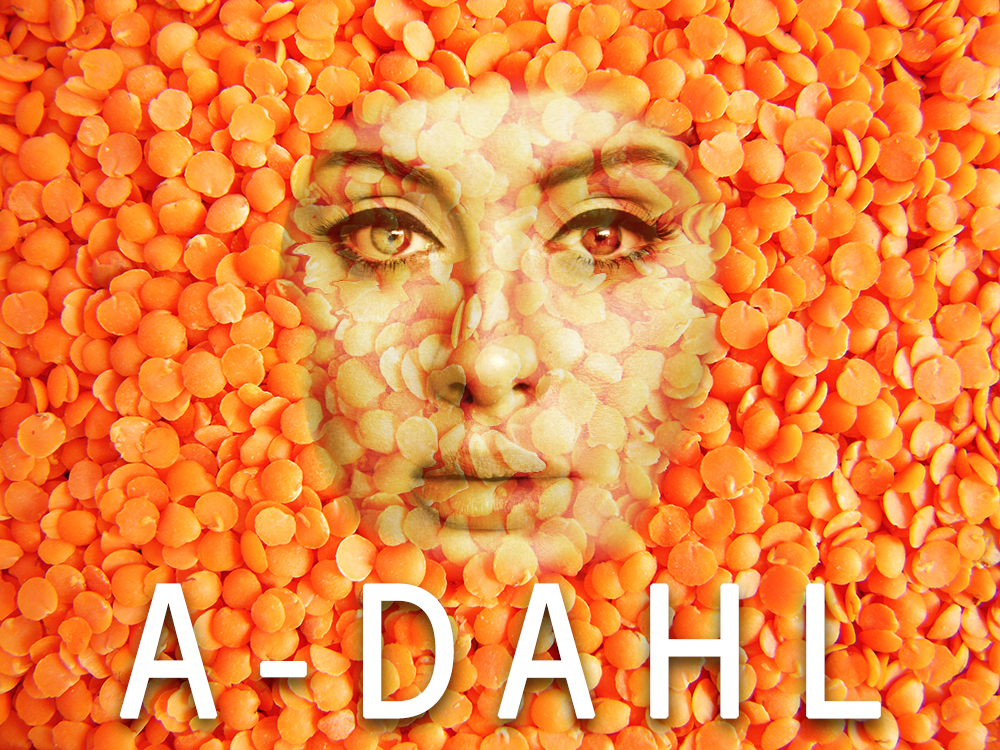 *This is nothing more than pure conjecture.

**Until at a certain point, quite early on, I will politely, but firmly, ask you to let go of my hand as I will need both of them for most of the food prep.