When we lined out our preferred lineup for Ireland to take on Georgia late last week, we included Wes Hoolahan because we knew there would be a need for someone to put their foot on the ball and open up a few chances.

Unfortunately, we didn't see any of Wesso and we got one of the most turgid Irish performances we've ever seen instead. Now, that is NOT to say that Wes Hoolahan alone would have changed the course of that game, but he certainly wouldn't have made things worse.

The big question now is; do we start Hoolahan against Serbia?

With an absolutely massive game ahead of us, here is our team, one we believe will at the very least try and acknowledge the need to complete more than two passes before kicking it as far as they could. 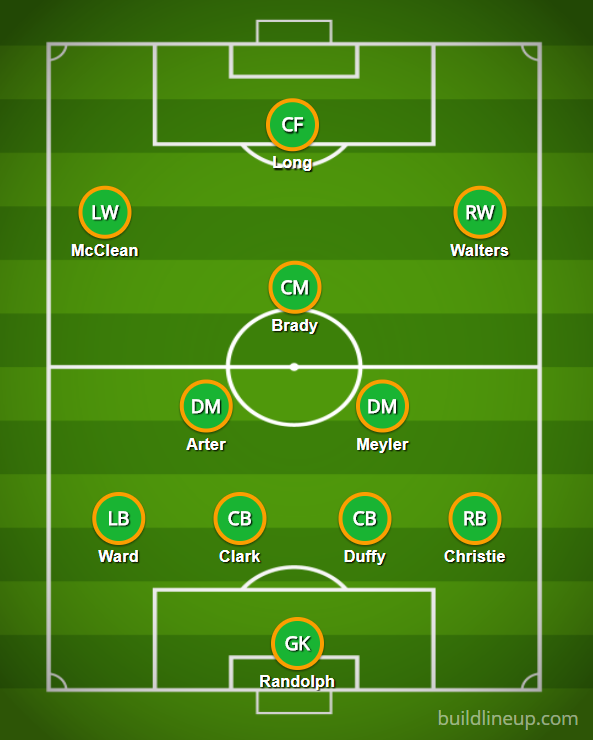 Let's address the elephant in the room first, Wes is not in because we are going to need our midfield to press the opposition and not allow them to dictate play the way the Georgian midfield did. We still need to see him from the bench at some stage though.

Randolph did nothing in Tbilisi to suggest he should not keep his place for Serbia, and the same can be said from the back four although someone needs to tell Shane Duffy to try and pick a target with his long balls.

Here is where there has to be change, and based on the Tbilisi showing it just has to be Glenn Whelan to make way. He was never the quickest, but against Georgia he looked like he was stuck in the mud and was a second late to everything.

With David Meyler coming in he would bring some much-needed energy, and he is someone capable of showing for the ball, making a simple pass, and then moving to show for the ball again. Harry Arter gets another chance and would be the deepest of the three, with Robbie Brady in a free role knowing he needs show more than he did against Georgia.

These three need to be at their most annoying for us to win this match. Shane Long simply needs more from his teammates this time, as he will run all day but needs at least a chance to win a long ball. Walters usually delivers for us in these games, while McClean will be desperate to make up for his missed chances on Saturday.

There it is, we're sure some will disagree, and we'd be happy to hear who you want to see instead. And yes, we understand if it's Wes.

Life
By CollegeTimes Staff
Killing A Sacred Cow: 8 Reasons The 2018 World Cup Is A Load Of Sh*te
Life
By Ian Smith
Football Is Back! But What Does It Mean For The Girls?
Life
By David Sweeney
12 Really Annoying People At Football Matches
Previous Next