Ahh, Ireland land of the Saints and the Scholars. Given that Paddy's Day will soon be upon us, there's just a few things we'd like to point out. We're not saying that all Americans like to push 'diddly-di' Irish stereotypes, just maybe the eh, odd few.

America we still love you!

1. Under no circumstances is it ever okay to refer to St. Patrick's day as Patty's day

"Omg you're Irish too. My great grandmother is from Kerry."

3. If we were that lucky, we wouldn't need to ask our folks for a lend of a few quid to buy a gaffe 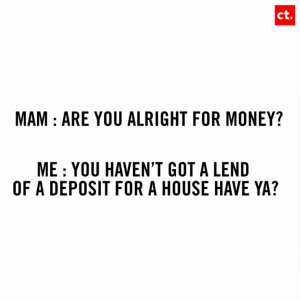 4. We love when you compliment our accent

5. Never say 'Top o the morning' not even as a joke

6. We don't all survive on a diet of Guinness and Tayto

7. We know Ireland's small an' all but we're going to go out on a limb here and say we don't know Mary O'Sullivan from Co. Cork

We actually do know one or two Mary O' Sullivans though.

8. You're right when you say we're great craic

9. Lads, just in case there's any doubt, we're not part of the UK

10. Not to burst your bubble but there are no sheep or cows floating around Dublin

I was in Dublin City on Paddy's day last year and I heard an American tourist say.. "I can't believe we haven't seen any sheep yet"

There are no words!!! Spotted on the @Luas in Tallaght in the last hour or so. pic.twitter.com/HLFTsYcFF3

11. Please don't think PS. I Love You is a snapshot of Ireland in any way, shape or form

From Gerard Butler's car crash accent (it made us want to die inside) to the priest singing a part of Fairy Tale of New York at Gerry's funeral, filmmakers threw ever Irish cliché at the movie, reinforcing every diddly-di stereotype ever.

Do you think any other Irish stereotypes need to be scrapped? Let us know in the comments.

Also Read: Being 22 In Ireland v America: The Differences

Life
By Ally Kutz
Being 22 In Ireland v America: The Differences
Life
By Rory McNab
An American School Has Perhaps The Worst Idea For Combating School Shootings
Life
By Alison Keogh
8 Lies To Tell Americans On Your J1
Previous Next

Life
By Ally Kutz
Being 22 In Ireland v America: The Differences
Life
By Rory McNab
An American School Has Perhaps The Worst Idea For Combating School Shootings
Life
By Alison Keogh
8 Lies To Tell Americans On Your J1
Trending Now
Entertainment
By CollegeTimes Staff
32 Ultimate First World Problems That Everyone Faces
Travel
By Dafe Orugbo
Bucket List: 20 Things You Need To Do Before You Turn 20
Life 101
By CollegeTimes Staff
The Different Types Of Personalities In Every Friend Group
41