Not everyone is willing to go to extremes to get what they want in life but one Irish woman decided to take matters into her own hands, or foot shall we say.

Kelsey Delaney, who studies at Maynooth University, decided the only way she could truly visit her favourite place on Harcourt Street whenever she wanted was by getting an exclusive Coppers gold card. And what better way to get a gold card than by having the club's stamp tattooed onto your own heel?

Speaking to Collegetimes, Kelsey revealed it was a heavy weekend spent in that motivated Kelsey to get the tattoo:

We were after spending literally all of Paddy’s weekend in Coppers, Friday Saturday, Sunday - it’s just the place you end up isn’t it? On Monday we were talking about how you get a gold card and one of the girls was like you’d need to get their attention so I said I’d text them asking if I got tattoo would they give me one and they said they weren’t going to encourage me to get a tattoo but if I did go ahead and get one, they’d give me a gold card

The black font tattoo was printed on Kelsey's right heel with the initials CFJ meaning 'Copper Face Jacks'. Regulars will recognise it as the club's signature stamp. 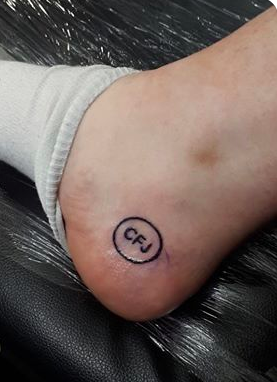 Coppers promised to give Kelsey a gold card and saying a "deals a deal" when she sent them a picture of the tattoo but it wasn't as simple as Kelsey first thought. As she's only 20 the club will give her the card when she turns 21, in a couple of weeks. Fingers crossed she gets it and it wasn't a complete waste of time.

Also Read: Listen: We've Found The Next 'Friday' Song And It's A Painful Experience

Add us on Snapchat: @collegetimest